Ferrari Challenge: in Valencia Race 2 in Schirò and Kinch 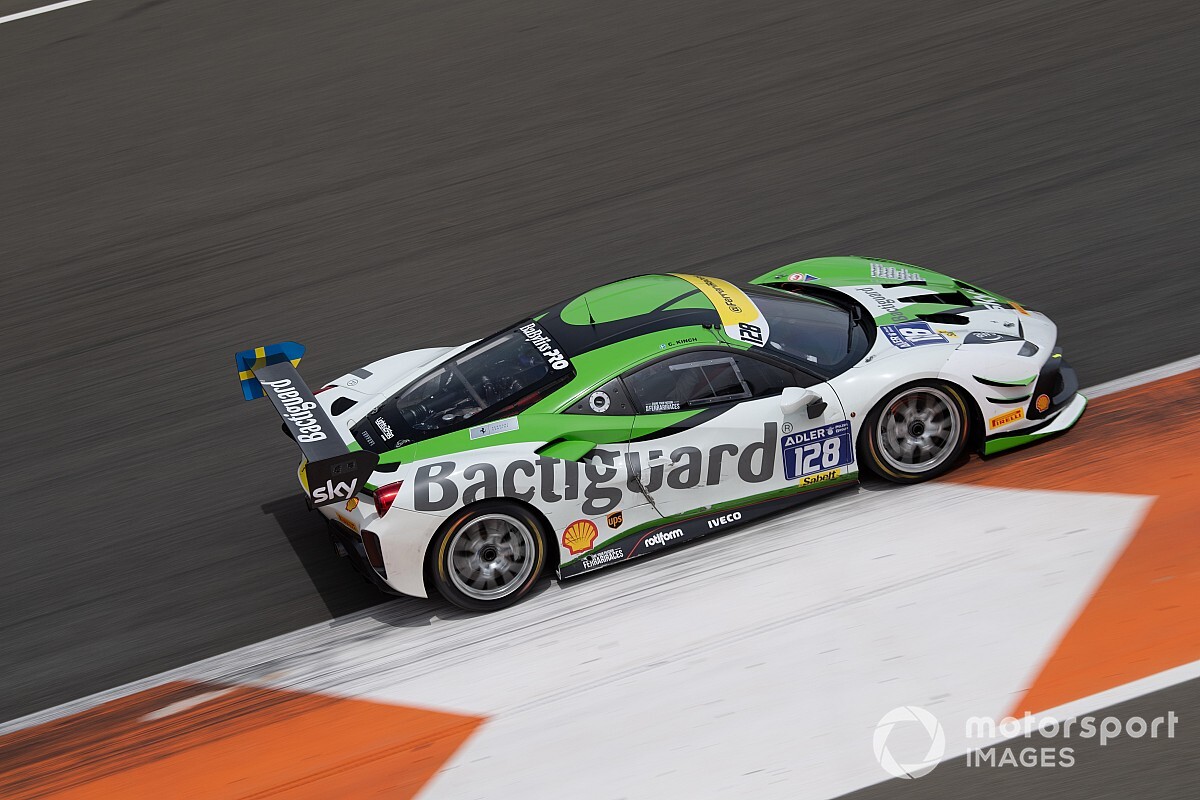 Ferrari Challenge: in Valencia Race 2 in Schirò and Kinch

There was no shortage of emotions in the two Sunday rounds held in Spain: here are all the Coppa Shell and Trofeo Pirelli winners.

An incredible weekend for Niccolò Schirò (Rossocorsa) who on the Spanish track obtained another victory in the Trofeo Pirelli, the second, to which the two pole positions are added. The Valencia circuit will remain in the memory for a long time also for Christian Brunsborg (Formula Racing) who among the Ams returns home with a splendid double win.

At the start Schirò defends his position, while Thomas Neubauer (Charles Pozzi – Courage) has a good start and overtakes Michelle Gatting (Scuderia Niki – Iron Lynx), snatching her second place. Fourth Luka Nurmi (Formula Racing). In the belly of the group, however, a series of contacts at the first corner immediately put out the cause of the two colors of the FML team – D2P, John Wartique and Roman Ziemian as well as Ange Barde (SF Côte d’Azur Cannes): following the damage reported all three are forced to drop out. To restore safety to the track, the Safety Car intervenes and freezes the race for about 9 minutes.

At the restart, nothing changes at the top, with Schirò keeping the lead and looking for the extension to push away the opponents. Neubauer, Gatting and Nurmi find themselves chasing the order. Among the Am, the fight that characterized the whole weekend between Brunsborg and Paulet comes back. Behind them Alessandro Cozzi (Formula Racing) climbs, followed by Marco Pulcini (Rossocorsa – Pellin Racing), Hugo Delacour (Scuderia Monte-Carlo) and Arno Dahlmeyer (Scuderia Niki – Iron Lynx). Roger Grouwels (Kroymans – Race Art), penalized by the accidents of the first lap, starts the comeback and moves to seventh position.

On lap nine, Neubauer, under pressure from Gatting’s attacks, misses the corner entry and is forced to give up second position to the Scuderia Niki – Iron Lynx team rider. Between the Am in the meantime the tight fight for the first place continues which sees Brunsborg always tailed by Paulet. Behind them Cozzi and Dahlmeyer, who in the meantime has passed Delacour and Pulcini, duel for the third position: the two however come into contact and slide in the standings, leaving the field open to Delacour.

At the finish line after 30 minutes of racing, Schirò passes first and scores his personal double on the Spanish track in front of the leader of the Gatting classification. Neubauer climbs on the lowest step of the podium. Fourth Nurmi.

Among the Am it is a fight until the last meter for the victory that goes to Brunsborg in front of Paulet and Delacour who in the meantime had come very close to the first two. Fourth position for Grouwels who overtakes Marco Pulcini in the last laps. Sixth Niccolò Rosi (Kessel Racing) who wins the duel with Omar Jackson (HR Owen – FF Corse).

The Valencia circuit also gives emotions in Race 2 of the Shell Cup. Christian Kinch (Formula Racing) and Am Joakim Olander (Scuderia Autoropa) are on the top step of the podium to sign an all-Swedish victory.

Twenty seconds after the start, Fons Scheltema (Kessel Racing) and “Alex Fox” (SF Grand Est Mulhouse) collide and the French driver gets the worst: “Alex Fox” goes off the track and cuts a curve crossing the gravel in a spin . His car, now out of control, returns to the track and hits Axel Sartingen (Lueg Sportivo). Race over for both, with enormous disappointment for the German who started from pole position. The first place is thus occupied by Christian Kinch (Formula Racing), followed by Scheltema and James Weiland (Rossocorsa). In the Am class, Olander manages to overtake poleman Ingvar Mattsson (Scuderia Autoropa) in the first corners. Behind them is Josef Schumacher (Eberlein Automobile), good at grabbing third place. Due to the initial clash, the Safety Car enters and freezes the positions for seven minutes.

The race resumes and the twists are not long in coming. The race judges attribute to Scheltema the responsibility for the clash with “Alex Fox” and the Dutch driver is forced to make a drive through which will irreparably compromise his race. Weiland thus takes second place, followed by Ernst Kirchmayr (Baron Motorsport). A close battle for third place is staged between the Ams with Schumacher who must defend himself from the attacks of Willem Van Der Vorm (Scuderia Monte-Carlo) and Giuseppe Ramelli (Rossocorsa – Pellin Racing). The Italian driver, however, accuses a technical problem and is forced to give way. The battle for third place is continued by another Italian, Maurizio Pitorri (CDP – Best Lap).

In the last ten minutes, everything happens. Weiland lends his side to Kirchmayr and the Austrian driver takes advantage of this by grabbing a second place that he will keep until the end, remaining behind the winner Kinch. In the Am Olander class he manages the race in the best possible way and goes to the conclusion in complete tranquility, crossing the finish line first. Behind him, however, Mattsson, who follows in second place, is reached by a penalty of 5 seconds for having exceeded the limits of the track and will finish in fourth place. Schumacher, while in third place, spun and finally greeted the podium, closing in the rear. A situation which Van Der Vorm takes advantage of and ends in second position, while Pitorri loses control of the car, thus giving the third step of the podium to his compatriot Paolo Scudieri (Sa.Mo.Car). Fourth was the poleman Mattsson who finished in front of Werner Genter (Moll Sportwagen Hannover) and Peter Christensen (Formula Racing).

The team with which Nicolás Castillo will resume his professional career