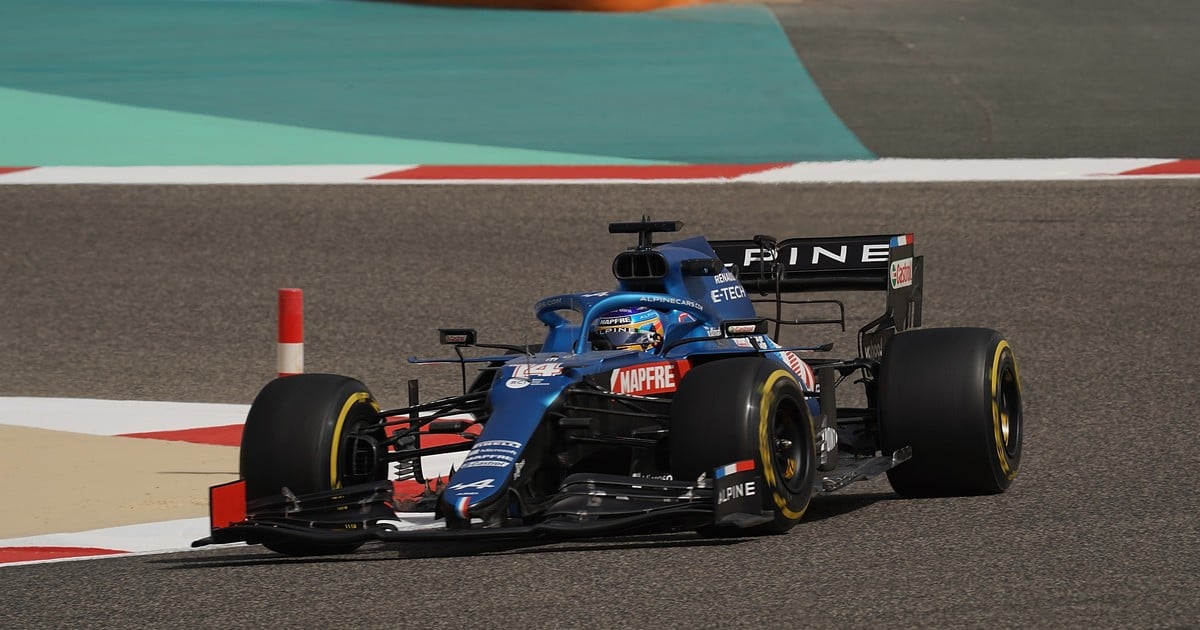 As if time had not elapsed for him, Fernando Alonso showed that his qualities are intact: on his return to Formula 1 after 28 months, the Spaniard achieved the second best time during the morning session of the second practice session of the test. from Bahrain preseason and finished the day in ninth place in the general classification.

On board his brand new Alpine A521, Alonso completed a long 43-lap first stint, entered the pits, and then completed another 15 laps in a four-hour session at the Sakhir circuit. His best time was 1: 32.339, which allowed him to be 124 thousandths behind Australian Daniel Ricciardo (McLaren), who was the fastest in the first round of the day.

The Spaniard, who had not participated in the top category of world motorsport since the 2018 Abu Dhabi Grand Prix, had missed two weeks of training due to a bicycle accident he suffered on February 11, but that did not seem to affect his work on his return to the slopes.

“He is extremely motivated and happy to be here. Besides being a fast driver, he is a great professional. He has been in this sport for many years, in Formula 1 and other categories, so his comments are extremely professional and complete in terms of the information he transmits to the engineers. He is fantastic to work with and will be helpful in helping to develop this car, ”praised Marcin Budkowski, CEO of the Alpine team.

On a hot and windy morning, although there were signs of the sandstorm that had complicated the task on Friday afternoon, not all of them were smiles. England’s Lewis Hamilton had a difficult start to the day, as in a fast lap attempt he lost the back of his Mercedes and ended up buried in the gravel at Turn 13, prompting the first red flag of the day.

Once he was able to return to the circuit, the seven-time world champion completed 58 laps, although he only achieved the eighth best time in that first part of the day. In front of him, in addition to Ricciardo and Alonso, were the Mexican Sergio Pérez, who is making his debut at Red Bull, the Canadian Nicholas Latifi (Williams), the Japanese Yuki Tsunoda (AlphaTauri), the Spanish Carlos Sainz (Ferrari) and the Russian Nikita Mazepin (Haas).

In the second session on Saturday the times were much better and the Finn Valtteri Bottas showed the superiority of Mercedes. The Scandinavian, who on Friday had only been able to complete six laps due to a failure in the gearbox of his car, set a time of 1: 30.289 and beat Frenchman Pierre Gasly (AlphaTauri) by 124 thousandths and by 271 thousandths to Canadian Lance Stroll (Aston Martin).

In this second round, Alonso did another 69 laps, although he could not lower his record for the morning, so he finished in ninth place in the general classification of the day. For his part, Hamilton did not return to the track and that relegated him to 15th place, only ahead of German Sebastian Vettel, who could only do 10 laps in the day due to a problem in the gearbox of his Aston Martin AMR21.

In this segment of training Czech Pérez had a scare when, with 80 minutes remaining in the session, the engine cover of his Red Bull came off as he tried to overtake Latifi’s Williams on the main straight. Already with a new engine cover, the Mexican returned to the track and finished eighth, 1,393 seconds behind Bottas.

The results of the second day of Formula 1 practice in Bahrain.