Félix Díaz replied to Alberto Fernández: ‘The President does not recognize that he is Argentine, he considers himself European’ 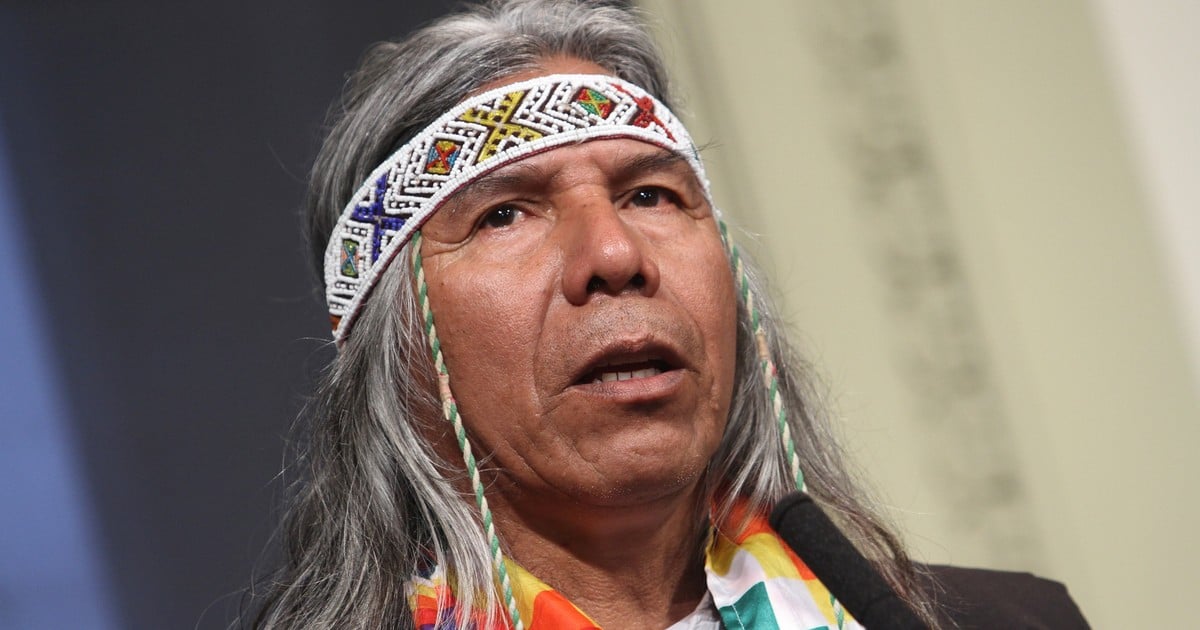 “He wants to continue to ignore the existence of indigenous peoples,” the Qom leader stressed. Felix Diaz in response to the statements of President Alberto Fernández about the origin of the Latin American peoples during a press conference at the Casa Rosada together with the President of the Spanish Government, Pedro Sánchez.

During an interview with Clarion, Díaz stated that “the President does not recognize that he is Argentine, he considers himself as European“, and highlighted:” We are concerned that a President says that and is unaware of the existence of the indigenous peoples of this country. Even in this era of modern time, which we are still isolated by the same state“.

The Qom referent warned that “Argentina continues to violate the human rights of indigenous peoples“, and conveyed the sadness of these communities at the unfortunate presidential phrase that the Argentines came” from the ships. “

“We demand that our President of the Nation take charge of what he says and repair the damage we have suffered as an indigenous people, but with dialogue, prior and free consultation,” he emphasized.

– How did you receive Alberto Fernández’s sayings about the Argentines arriving from the ships?

– Do you think it was an unfortunate phrase or that it is the true thought of the head of state?

– It is what not only the President but the citizens think, it is something that comes from education, because we always appear as the past. The indigenous people hunted, fished, gathered, and we were nomads. Then, the natives are the savages, the bad ones, those who killed whites. They campaigned with the army and civilians to exterminate the indigenous peoples and do not recognize those genocides committed. They believe that because they are white they are the best human beings, intelligent, capable of building a country that it was found as if it were a desert, when this country was inhabited by indigenous peoples of different cultures. The President does not recognize that he is Argentine, he considers himself European. That is what worries us the most.

– Is it enough with an apology on social networks?

– It is not solved with an apology request, has to repair the damage with resources. We demand from our President of the Nation take care of what you say and repair the damage we have suffered as an indigenous people, but with dialogue, prior and free consultation. That is what we want, because with apologies the problems we have are not solved. The President has to listen, dialogue, receive our proposal and put into practice what integration is. We have always suffered that discrimination, because when a brother is killed the figure always appears as an accident. The indigenous are not seen as a subject of law, as a human being, but rather as an object. When one kills our brother what they say is ‘I apologize, it was a mistake’. So they think that this solves the problem, but it is not like that.

– What is the relationship that indigenous peoples have with the national government?

– In the first moment you assumed Alberto Fernández called me to summon me for an interview at the Casa Rosada to give continuity in the space that we have as the Consultative and Participative Council of the Indigenous Peoples of the Argentine Republic, which is a space created through a decree by the previous president Mauricio Macri. This space is properly indigenous, but what this government says is that it is a Macri decree, therefore I am a macrista. Then, that invitation that he extended to me in December 2019 never materialized. We have sent notes to the former Minister of Justice Marcela Losardo, to the Secretary of Human Rights, Horacio Pietragalla, and to the Chief of Staff, Santiago Cafiero, but we had no response.

– With the camping in front of Casa Rosada they managed to make visible the problems they have as a community?

– We never had a response from the State to our demand for dialogue. This claim that we have been making since January camping in the Plaza de Mayo, a few meters from the Casa Rosada, never had an official response. At least he tells us that nothing can be done, that he does not want to talk to us, but they do not tell us anything. We have never been officially answered and our phone calls are never answered.. We understand that they they see us as opponents of the government, when we present ourselves as an indigenous representative.

– Did the head of state or any official of the national Executive approach the camp?

– Nobody comes to talk to us and we are worried because there are many problems in indigenous territories: there is no water, there is no health, there is absolutely nothing. You can no longer look for changas because the routes in Formosa, Salta, Chaco are blocked and the most affected are the indigenous peoples because we do not have their own income. We are more isolated with this pandemic and many brothers have died for coronavirus. My mission is to continue spreading the injustice that indigenous peoples suffer, that is why we focus our gaze on the National Executive Power. They have to be the guarantors of the respect that we should have as indigenous people and the governments have to assume that responsibility.