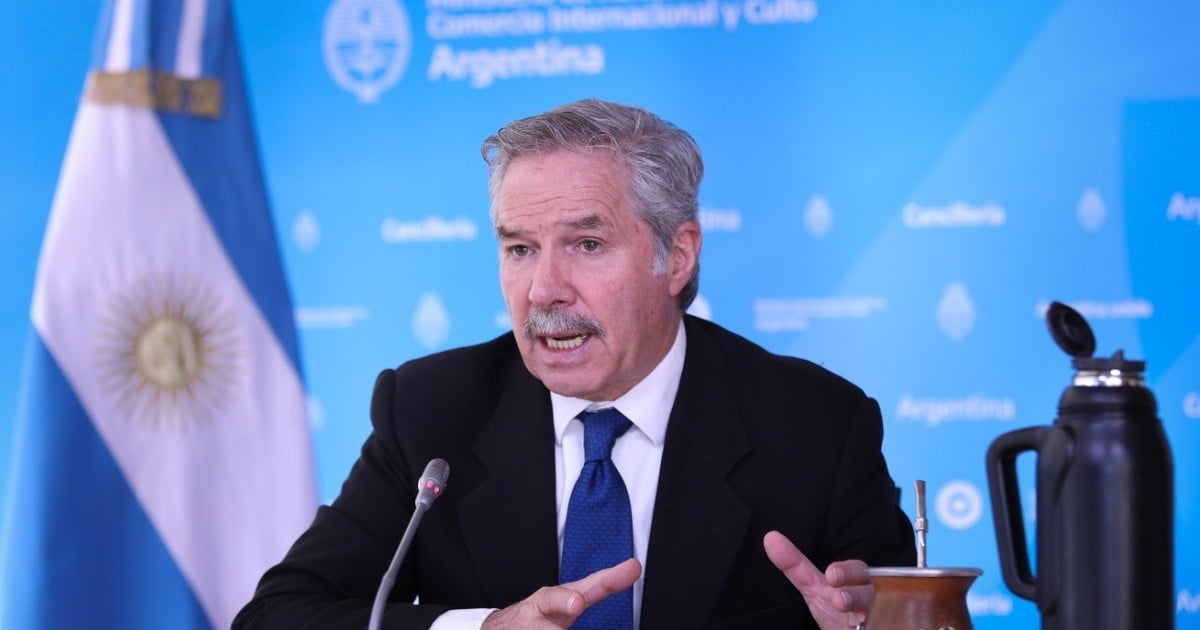 The different political forces joined positions this Wednesday to reject before the Senate Foreign Relations Commission a recent decree of the Chilean government that delimited the continental shelf of that country to the south of Tierra del Fuego, in an area that overlaps with the extended platform. for Argentina.

On that train, Foreign Minister Felipe Solá opened the virtual meeting with the legislators accompanied by the secretary of the Malvinas Area Daniel Filmus, together with technicians and diplomats from the Ministry of Foreign Affairs. Chile “manifests an expansive vocation” that Argentina rejects, Solá said. in his speech they were followed by figures from the ruling party but also by opposition senators such as the radical Julio Cobos or Humberto Schiavoni, from the PRO.

For his part, the Peronist Adolfo Rodríguez Saá received him with a draft declaration for the Chamber to reject the decree of President Piñera that claims for his country an area of ​​the maritime platform in the South Atlantic.

Foreign Minister Felipe Solá and the Secretary of the Malvinas Area, Daniel Filmus before the Senate Foreign Relations Committee

Solá, who on Tuesday criticized a PRO statement that called for dialogue with Chile but did not criticize the trans-Andean position, this Wednesday found an atmosphere of unity and support practically from the opposition forces. Furthermore, Cobos thanked him, although he asked him to appear more in Congress and that they want to hear him speak about the government’s policies regarding Nicaragua and Venezuela. Solá said “yes”. But also He demanded that the opposition rule on who is right, yes Argentina or Chile.

He began his presentation by recalling that on August 23, the Chilean Government published Decree No. 95 on maritime spaces, “by means of which it intends to project its continental shelf east of meridian 67º 16’0, advancing on the Argentine continental shelf in about 5000 km2 and also overlapping with around 25,000 km2 of oceanic seabed that constitute Common Patrimony of the Humanity “.

On that train, he declared: “The aspiration that now Chile expresses extemporaneously it contradicts the letter and spirit of the 1984 Peace and Friendship Treaty, manifesting an expansive vocation that Argentina rejects. “

Solá assured that the decree of President Sebastián Piñera is “contrary” to article 7 of the 1984 Peace and Friendship Treaty, for the following reasons that it establishes that “to the south of the end point of the limit (point F), the Exclusive Economic Zone of The Republic of Chile will be extended to the distance allowed by international law, west of meridian 67 ° 16 ‘, 0 west longitude, delimiting the east with the high seas ”.

The minister said that Chile’s exclusive economic zone “cannot be extended” beyond the limit agreed therein.

The Chilean government also contradicts this idea. They interpret that the Peace Treaty regulates waters but not the continental platform, which is the natural extension of a national territory that includes the bed and subsoil of the underwater areas that extend beyond the territorial sea.

But, Solá said, Chile cannot pretend to project its sovereignty in any of these maritime areas (waters, bed and subsoil) beyond the limits agreed in article 7 of the 1984 Peace and Friendship Treaty.

The minister assured that Chile had not protested until May 2020, when the Argentine government made law its new limits with the continental shelf up to 350 nautical miles where the geography required it. “That country had numerous opportunities both at a bilateral and multilateral level to express its disagreement specifically and, having all the information to do so, it chose not to do so with the effects that this entails.”

“The proposals contained in the Chilean diplomatic correspondence prior to May 2020, do not refer in any case to the sector that is now intended and only require some issues related to the Antarctic continent,” he said and recalled that six other countries did object to the Argentine presentation: Kingdom United States, Russia, India, Netherlands and Japan

“It would have been enough for Chile to send a note to our country or to the Commission to prevent it from being issued on the matter, just as Argentina did in a timely manner to prevent the Commission from ruling on the United Kingdom’s presentation on the continental shelf. of Malvinas “.

For Solá, this implied that Chile recognized that the Argentine continental shelf beyond 200 miles south of Tierra del Fuego constitutes the natural extension of Argentine territory, which is the object of the fight now.

President Alberto Fernández, who visited Piñera last January, is now silent for now. But it is known that the Chilean president is in Casa Rosada. Furthermore, they assure that their decree had electoral purposes – Chile is in the run-up to the presidential campaign, although Argentina is also, but legislative.

In Balcarce 50 they are even tougher and there are those who compare the trans-Andean president with the former dictator Leopoldo Fortunato Galtieri, for his military adventure in the Falklands in 1982, which led Argentina to a war with the United Kingdom.

Piñera, who said in an interview with El Mercurio that his country was acting in “its right”, did not comment further on the matter. Meanwhile, his chancellor, Andrés Allamand, said that on Sunday he was going to call Solá, but no conversation has yet been communicated.

The crisis with Chile is strong, and it follows a year and a half of other bilateral misunderstandings. The Argentine minister already said this Wednesday that the dispute resolution mechanism that would be applicable to this conflict is the one provided for in the 1984 Peace and Friendship Treaty, which contemplates a conciliation procedure (Art. 5) and ultimately enables Either of the two countries to sue the other before an arbitral tribunal (Art. 6) with respect to which it will be obliged both to appear and to comply with its sentence.