‘Fed up with the zoom’, two girls founded a library and already has more than a thousand books to lend for free 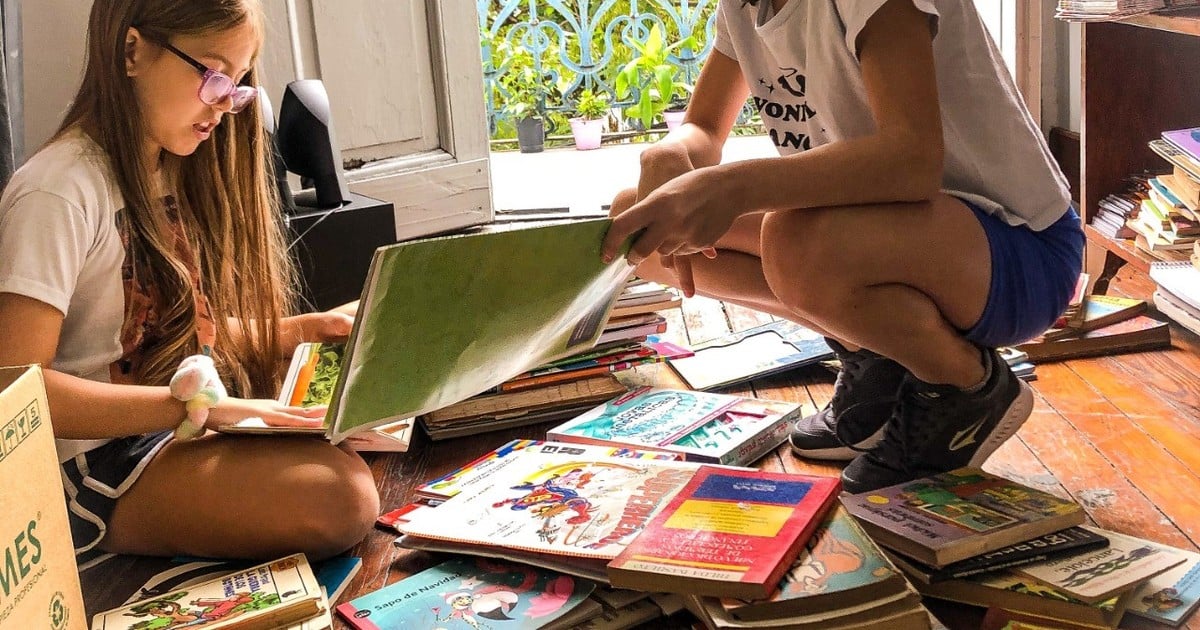 A ritual repeated in the past that the boys of today can surprise and confuse. Federico (9) enters the room with hardwood floors, look at the spines of colored booksHe looks at one, at another, he makes up his mind. He takes the chosen one out of the line, brings him closer to the librarian. He is amazed at taking what he wants, at not having to pay anything. To see, touch and enjoy something that does not come on the screen.

He’s in a new children’s library, the only one in Flores. Is named “Alfonsina Storni” and it belongs to the museum that bears the name of the neighborhood. The shelves full of titles make the room look like a bookstore, but here the service is free. That confuses Federico, who came accompanied by his father but this time he should not ask “Please buy me.”

The idea comes from two girls who are barely older than him: Lucía D’Anna (11) and Alma Braña (10). They are cousins, daughters of the museum’s founders. Alma’s mother, Mariana D’Anna, attends the library together with another member of the institution, Nicolás Tatasciore. The other protagonist of the project is the neighborhood itself: its neighbors, who 1,000 volumes and a wooden shelf have already been donated.

“It was better than we expected, because they started rain books: people donated and donated, and every time we had more ”, celebrates Lucía. Remember that as a child she liked to play the librarian. And that he saw that in the museum “there were books exhibited, but that the boys could not touch”. “So Alma and I told our parents about the idea,” he reviews.

Two girls created the library of the Museum of Flowers and they already have more than a thousand books.

They do the selection process themselves and stay only with books that are in good condition. The result is a mix between old and new, 800 volumes including novels by Harry Potter, volumes of Choose Your Own Adventure, comics, encyclopedias. Even copies of the Robin Hood collection, the first way of access to literature for many Argentines.

All this in a neighborhood strong in letters, of illustrious neighbors like Roberto Arlt, César Aira, Baldomero Fernández Moreno, Alfonsina herself. “We chose it to baptize the library because I lived in Flores “says Alma. “And because she was an anti-princess, a fighter,” adds Lucia.

“We’re sick of Zoom ‘Alma and Lucia told us. With this project we wanted to return to the physical, paper book ”, says Roberto D’Anna, father of the second and founder of the museum. And he suggests: “It’s a good way to get the kids out of so much video game. We want the book to re-enter the houses, that parents read to their children again ”.

This accustoming to screens is in contrast to being unaccustomed to looking for a book in a library. “At first the boys came shyly, they did not understand how to do or the difference with a bookstore,” Roberto observes. We explain that they can look at the books, choose one and take it home for free, but that a week they must return them ”.

Alma and Lucía created the library of the Museo de Flores and they already have more than a thousand books.

Some little readers want to stay there to read, but the librarians explain that you can’t, because of the pandemic. Roberto is “surprised that they try to sit down and read it.” “It’s nice to see them smile. Even if the chinstrap is present, we see it the same ”.

The library receives readers and donations from Monday to Friday from 11 a.m. to 1 p.m. and from 3 p.m. to 7 p.m., and on Saturdays from 10 a.m. to 7 p.m. It is in the airy Edgardo Fornero classroom of the Museo Barrio de Flores, in Ramon Falcon 2207, corner Bonorino. His telephone number is 11 2611-9800 and his email is hola@museobarriodeflores.com.ar.