“Fascism or Democracy”: Charged regional elections are underway in Spain – Sánchez before the political end? 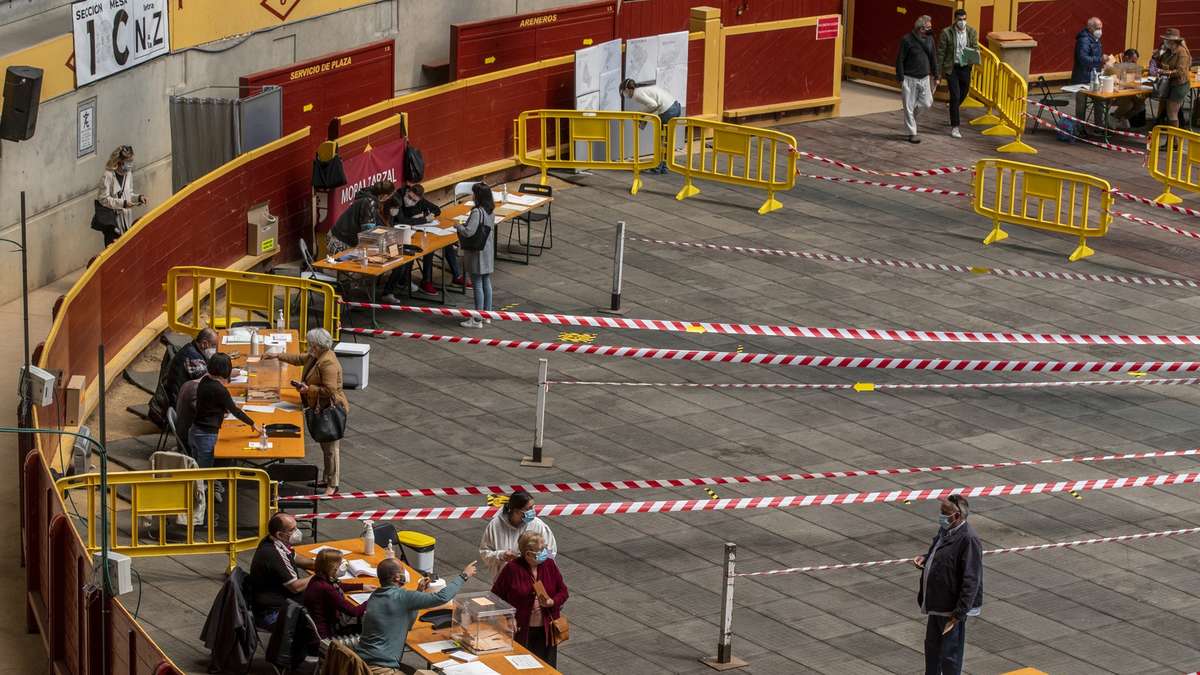 The election campaign in the capital region of Madrid was marked by extremes. The conservative incumbent Ayuso hopes for a victory in “Europe’s party capital”.

Update from May 4th, 9:06 p.m .: According to media forecasts, the ruling Conservative People’s Party (PP) achieved a remarkable triumph in the early regional elections in the Spanish capital region of Madrid. The PP of Prime Minister and top candidate Isabel Díaz Ayuso clearly won on Tuesday and won between 62 and 65 of the total of 136 seats in the regional parliament, reported the state television station RTVE shortly after the polling stations closed at 8 p.m. on the basis of voter surveys on the day of the vote.

To form a government, Ayuso is likely to continue to rely on Vox’s right-wing populists if they do not achieve the absolute majority of seats (69) in the course of the evening, which, according to observers, was not excluded. In the last election in 2019, the People’s Party only got 30 seats and took second place behind the Socialists (PSOE / 37 seats). At that time Ayuso was still able to form a minority government with the liberal Ciudadanos, which Vox tolerated.

Vox came after the prognosis from RTVE on Tuesday to 12 to 14 seats (2019: 12 seats). Ciudadanos meanwhile threatened loudly RTVE to fail at the five percent hurdle. The PSOE of the Spanish Prime Minister Pedro Sánchez suffered heavy losses according to the forecast and only got 25 to 28 seats. The RTVE-According to the figures, the left Más Madrid party had 21 to 24 seats, the left-wing alliance Unidas Podemos (UP) 10 to 11 seats. The left spectrum thus had no chance of forming a government. Official extrapolations based on counted ballot papers were initially not available.

Charged regional elections are underway in Spain – Sánchez before the political end?

First report from May 4th: Madrid – Around 5.1 million residents of the Spanish * capital region of Madrid were called on Tuesday, May 4th, to a regional election in which the right of the country could hope for a victory. According to surveys, the regional head of government Isabel Díaz Ayuso from the conservative People’s Party (PP) headed for around 40 percent, almost doubling their share of the vote by 2019. Together with PP boss Pablo Casado, she called the vote, which roughly corresponds to a state election in Germany, for the “beginning of the end” of the left-wing government of Prime Minister Pedro Sánchez *. There was only marginal mention of the major economic and social problems in a country exhausted by the corona pandemic *, which is placing all hopes on the EU’s billions in aid.

Ayuso made a name for herself above all by criticizing the restrictions initiated by the Sánchez government since the beginning of the corona pandemic * and only reluctantly or not at all to implement them for Madrid. Despite higher numbers of infected people and deaths, many gave her credit for keeping it open. Madrid was at times referred to as the “party capital of Europe” and pub owners call Ayuso a “Santa”, a saint.

But even with a good election result, the 42-year-old would most likely need a partner for a parliamentary majority. And there is currently only the right-wing populist Vox in question, which the minority government of Ayuso with the liberal conservative Ciudadanos tolerated in the last legislative period. The Liberals acted clumsily, however, and Ayuso terminated the coalition in March. At the same time, she started the election two years early in order to forestall a vote of no confidence in her. According to surveys, Ciudadanos is now threatened with failing the five percent hurdle.

Then Ayuso would only have to rely on Vox, which was around nine percent in surveys. “We will offer our votes to Ayuso, but with conditions,” said Vox top candidate, Rocío Monasterio. Which are they? “We’ll say that on May 5th.”

The prospect of a PP-Vox pact united the otherwise often divided left. Sánchez said the “beginning of the end of a life-filled democracy” is threatening. Pablo Iglesias from the left-wing alternative Unidas Podemos even went into battle with the battle cry “fascism or democracy”. (dpa / fmü) * Merkur.de is an offer from IPPEN.MEDIA

Huawei is going to fight the US in a new way