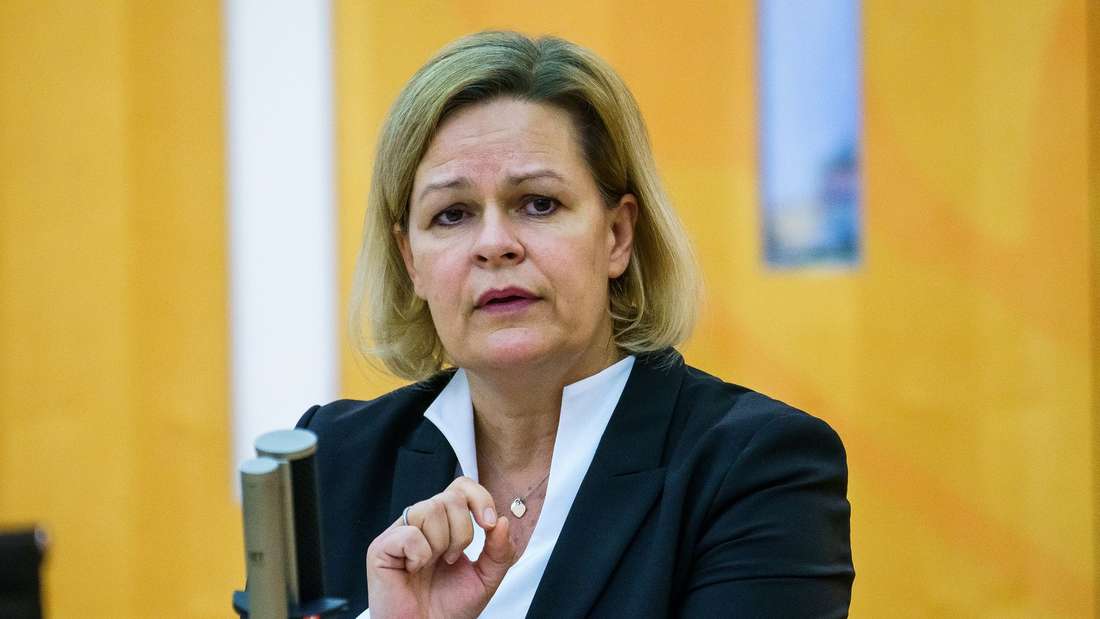 In terms of migration and integration policy, the Ampel coalition has announced a “new beginning”. The Interior Minister is now taking the first step.

According to a new assessment by Interior Minister Nancy Faeser, Berlin – Afghanistan is now considered a “country of origin with good prospects to stay”.

This enables asylum seekers from the country, which is now again governed by the Taliban, to take part in state-funded integration courses before a decision is made on their application in Germany. As the German Press Agency learned from government circles, the SPD politician decided in favor of this classification for Afghanistan, although the criterion of an “overall protection rate” of more than 50 percent that has been applied in previous years has not been achieved. The Federal Ministry of the Interior justifies the new vote in an internal submission that it can ultimately be assumed that the protection quota for Afghanistan “will increase in the future”.

The Ministry of the Interior has now joined the view of Labor Minister Hubertus Heil (SPD). He had already granted asylum seekers who entered the country after August 1, 2019 access to the professional language courses for which his department was responsible in mid-November 2021. Faeser’s predecessor in office Horst Seehofer (CSU) had rejected a change in the classification of Afghanistan at the time.

See also  'I am absolutely convinced that Putin will fail': Antony Blinken

The so-called total protection quota indicates the proportion of positive asylum decisions for people from a certain country, including restricted refugee protection and deportation bans. The countries of origin with good prospects of staying are currently Syria, Eritrea and Somalia.

“We have to integrate people who come to us and who will stay in Germany for the foreseeable future,” said Faeser, explaining her decision. Those who have fled Afghanistan will not be able to return there for the time being. Rather, the current situation requires “that we evacuate people from Afghanistan week after week”. The opening of the integration courses, even before the final decision in the asylum procedure, is “a long overdue step”.

Federal Labor Minister Heil said on Thursday: “Here, too, it is clear that the new government is an alliance for what is sensible and feasible at the same time and is working together on pragmatic solutions for existing tasks.” After all, language is the most important basis for successful integration – into society and also in the world of work.

However, according to dpa information, there is skepticism in the migration department of the Federal Ministry of the Interior. This is justified in a “special vote” with the fact that it is unclear “on the basis of which objective criteria” this prognosis is made. It also creates a precedent for other countries of origin.

For Afghanistan, the so-called overall protection rate in the first seven months of last year was around 39 percent. After that, asylum decisions were postponed because the Federal Office for Migration and Refugees (Bamf) was waiting for the federal government to reassess the situation in Afghanistan. Since December 1st, decisions on applications by Afghans have been made on the basis of new guidelines.

The Bundeswehr withdrew from Afghanistan at the end of June 2021 after a 20-year deployment. As a result of the withdrawal of all foreign forces, the militant Islamist Taliban gained the upper hand in the country, including in the capital Kabul in mid-August.

Former local staff of the Bundeswehr and other German institutions as well as human rights activists and other particularly vulnerable people from Afghanistan who have been accepted by the Federal Government do not have to apply for asylum. In principle, you are entitled to a residence permit, you can work and take part in integration courses.

See also  Russians warned about the increase in tornadoes and tornadoes

How homeowners take decisions without a meeting

Faeser’s decision is “to be seen as a clear signal from the new federal government for a looser asylum policy,” said the domestic political spokesman for the Union parliamentary group, Alexander Throm. It is particularly worrying that “you are breaking with the previous procedure that was based on objective criteria”. This will lead to an increase in asylum applications from Afghanistan and from other countries. The CDU politician emphasized: “Detached from this, of course, we stand by our obligations to the former local staff and particularly endangered people from Afghanistan.”

The SPD, Greens and FDP had stated in their coalition agreement: “For the fastest possible integration, we want to offer integration courses for all people who come to Germany from the start.” Conventions and German history conveyed. dpa The American University of Sharjah launches its introductory week for Spring 2022.. Virtually