Fabien Roussel: “We will lead the fight for reindustrialisation with you” 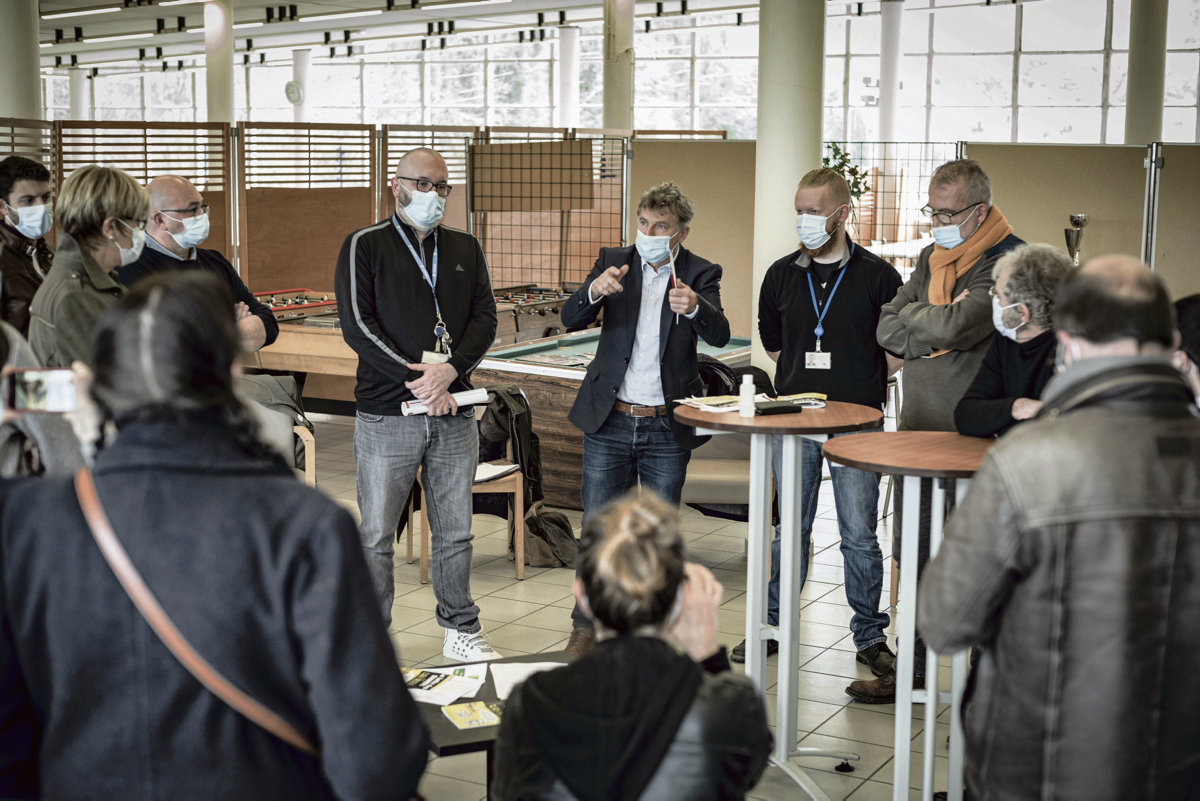 “ O enters election period, and ears are much more open. “ The national secretary of the PCF, Fabien Roussel, starts his visit to the department by meeting with the intersyndicale de Vallourec, a metallurgical company whose site in Deville-lès-Rouen will soon be closed. To trade unionists looking for reclassification avenues for their factory, the deputy for the North, accompanied by Senator Céline Brulin and deputy for the constituency Hubert Wulfranc, promises to intervene with the government. “We have every interest in weighing together with the ministry to obtain the reindustrialization of the site”, offers Fabien Roussel. “You have to get a meeting in Paris. “

This day in several companies in the suburbs of Rouen, the national secretary of the PCF wanted it as an exchange with employees, most of them in touch with the consequences of deindustrialization, whether linked or simply amplified by the crisis sanitary. “When these factories close, it is the employees who pay, and the entire employment pool with it. ” No question of letting it happen, for the three communist parliamentarians, who wish to support the union mobilizations as much as possible. Thus, at Cléon, some 687 Renault employees are invited to the ” voluntary departure “ by the group’s management.

“With this economic system, we are all losers”

Essentially, they work on the production of heat engines and gearboxes, according to a CGT unionist, Pascal Le Manach. “We tell them that they are no longer useful. “” In the long term, we will only produce here hybrids and electrics “, regret Pascal and his colleagues. Employees will be on national strike on February 4. “We have invested heavily to reduce fine particle emissions, there is real know-how that we must preserve. We cannot bet everything on hydrogen and electricity. We will fight this battle with you ”, Fabien Roussel promises. “We are going to put it at the heart of the upcoming elections. With this economic system, we are all losers. These are fewer jobs, less tax revenue, and a deplorable carbon footprint with the relocation of production sites. “

A little earlier, the three parliamentarians went to the picket line of Enedis employees, in the fight against the Hercules plan which aims to separate EDF into three distinct entities. An appreciated passage. “We thank the elected Communists who support us and have succeeded in opening parliamentary committees. “” We were able to initiate a debate on Hercules in the Senate “, underlines Senator Céline Brulin. “We will lead the fight with you, for you, but also to help revive the economy of our country”, assures Fabien Roussel.

In the midst of a health crisis and in the midst of the controversy over the shortages of vaccine against Covid-19, the three elected PCF also have an appointment on the Sanofi site in Saint-Aubin-lès-Elbeuf. The group intends to outsource six factories, including that of Elbeuf, and put the remaining sites in competition … On January 19, Sanofi employees are on strike. “We are a site specializing in antibiotics”, explain the trade unionists to elected officials. “But Sanofi doesn’t want to do it, because it doesn’t bring in much. ” According to them, “A medicine that cures is not a good medicine. Sanofi prefers to develop drugs that treat ”. A trade unionist also recalls that the pharmaceutical group has received one billion euros, in ten years, in research credits, “While cutting jobs”. For the national secretary of the PCF, “We need legislative tools making it possible to requisition production sites to make vaccine doses”. And, more than ever, to recall his party’s proposal to create a “Public drug hub”.

Finally, the Communist parliamentarians finally meet the actors of the event (intermittents, artists and entrepreneurs) in the Roland-Leroy auditorium in Oissel. “We came above all to listen to you”, warns Hubert Wulfranc. And the anguish is strong: “People have taken on new habits, it won’t start again immediately”; “Will the communities allocate us the same budgets as before the crisis? “; “How are we going to repay the loans guaranteed by the state? “…” We denounced inconsistent decisions “, then recalls Fabien Roussel. “We could have kept the places of culture open. “ Moreover, according to him, “State aid is not not sufficient ”. And badly done. He thus reminds an entrepreneur why he voted against the 10 billion euros in tax cuts granted to companies.“Because we have granted this aid to all companies, including the largest, which will absorb most of it. While it would have been necessary to grant a 100% abolition of the property tax and the CVAE (contribution on the added value of companies – Editor’s note) over two years, but to the 520,000 VSEs and SMEs who really need it. ”