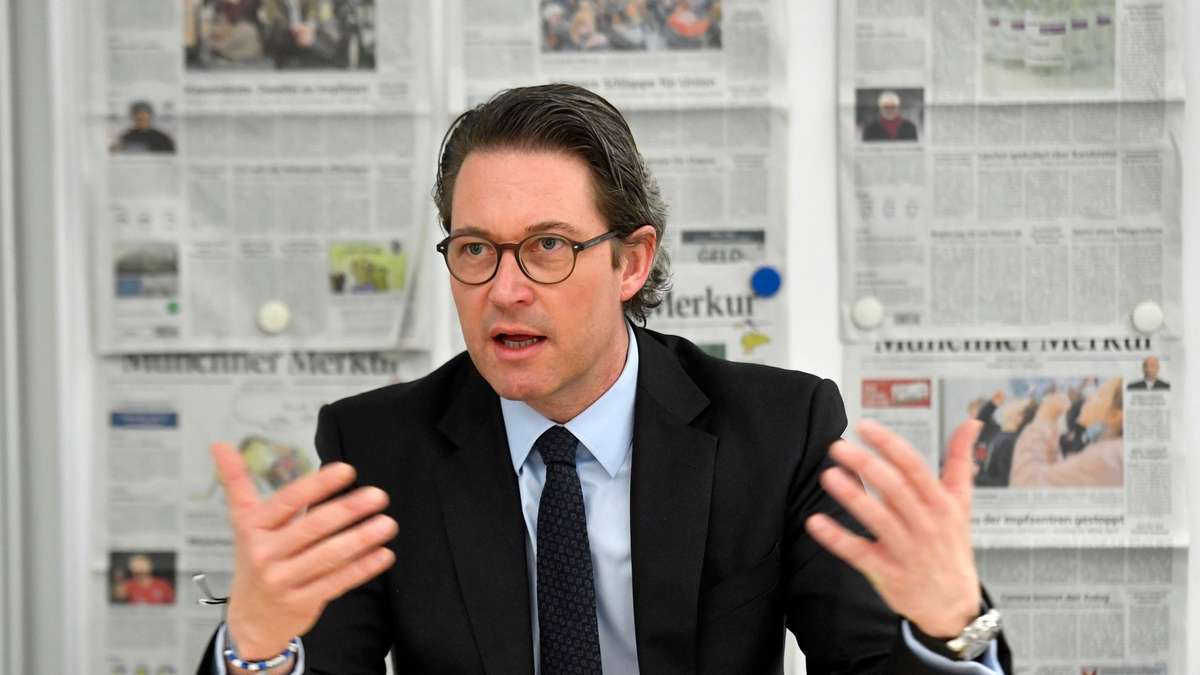 A task force is now to regulate the distribution of the corona tests. This working group is headed by Andreas Scheuer. In an interview, the transport minister explains his plan.

Munich – Andreas Scheuer (CSU *) is Minister of Transport – and the highest corona test purchaser in the country. In the interview he talks about problems with the test distribution, hygiene concepts for schools and excessive data protection.

Mr. Scheuer, you and Jens Spahn are heads of the Rapid Tests Taskforce *. Are there any initial results?
Scouring: Only the first results would be too few at this point, there are concrete results: There are enough professional rapid tests * for test centers, for this year alone the federal government has secured 800 million that the federal states can access. They mainly want to use self-tests or lay tests in schools and in administration and need almost 15 million tests per week. Here we helped the countries very, very quickly: In the last week we secured a contingent of over 27 million tests for March and 45 million tests for April. The countries are already calling them up.

Then why do we keep hearing that nothing gets through in schools?

Scouring: Every country has its own ideas when it comes to deliveries. In the task force, we have clearly agreed that the countries will take care of this themselves. The federal government does not interfere. Germany is the world champion in logistics. It must be possible to supply every village school.

But the impression is: the discounters can deliver, the state fails because of it.

Scouring: Millions of self-tests have been delivered to Bavaria. The federal states have made use of the contingent of over 27 million lay tests reserved for March and the manufacturers deliver every week. The federal government is not responsible for distribution to the school door.

Do you understand the frustration of students and teachers?

Scouring: I’m also a father and I took digital lessons with my daughter, second grade in elementary school. My idea would be: We start with the fan equipment in the classrooms. You know the number you need. The state should procure the fans, not the municipalities. It’s too troublesome. Plexiglass panes between the tables and the installation of test streets in front of the classrooms are also options. Then the lessons start a little later in a coordinated manner, but the students are tested and protected.

Maybe you should apply to be the Bavarian School Minister …

Scouring: No thanks. I’m a logistician and I just imagine how it can work.

Scouring: I don’t want to say that. I agree with digital lessons, but we still need a perspective for high incidences. In addition to the minister and father, I am also the CSU district chairman in Lower Bavaria. In our country, the incidences are so high that schools and daycare centers cannot currently be given any prospects, at least not with the current equipment.

Can you guarantee that there will be no more test bottlenecks from Easter?

Scouring: Within a few days, we have reserved substantial allotments for the countries in March and April. We forward all offers from manufacturers to you. In the task force there was a joint discussion with manufacturers, retailers and logistics associations. Building on this, the federal states will be able to provide themselves with lay tests on the market from May onwards.

Are you a little frightened when the Chancellor summoned you to the task force as the much-criticized toll minister?
Scouring: I’m not the toll minister, I’m the transport and digital minister *. So what worries me are fundamental freedoms and data protection. There are many start-ups that can help implement traceability and documentation of the test strategy.

Do you think we need to loosen up on data protection?

Scouring: I would put it another way: If you want to go to the theater, cinema or stadium this year, you have to be open to practical solutions. The Greens, on whose support we in the Federal Council depend, always act digitally. But if there are concrete proposals, they condemn them in a fluff. With the Corona warning app, the greatest increase in benefit would be personalized traceability.

Do you have the impression that we will finally get an app like this soon?

Scouring: At least there are very, very many suggestions from the digital scene. With the corona pandemic, we have to become more digital, simpler and more understandable, otherwise people’s acceptance will decrease every day. We have to take understandable measures. That is the feedback from the citizens, the debates are growing. The Prime Minister’s Conference must seize the opportunity: There must be no opening aria, but openings with common sense and a sense of proportion are required.

AstraZeneca Vaccine: These side effects are known

Column: “Ask the Mohr”: Will the M-Dax become obsolete?