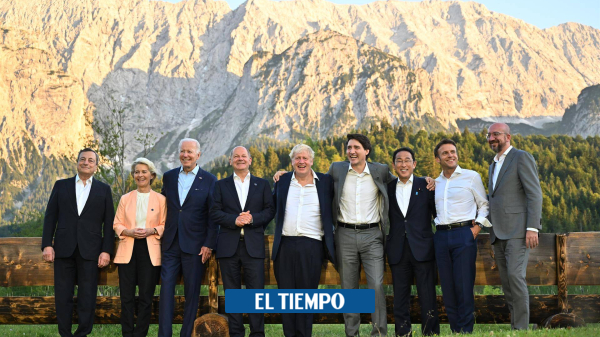 Last Thursday’s European summit put great focus on granting Ukraine and Moldova the status of candidate countries for accession to the European Union.

A door that is ajar for two countries under invasion or threat from Russia and a signal to Moscow that the block has no intention of respecting zones of influence and yes the free decision of each country to choose its alliances and its future.

The elephant in the meeting of the leaders of the Twenty-seven, however, was another, but also related to Russia: energy and its relationship with the rise in inflation.

The German government decided last Thursday to activate the second phase (of three) of its emergency plan in the event of a possible cut in Russian gas supply.

If, as Berlin fears, the Kremlin decides to turn off the taps, Germany may face an energy crisis next winter at the end of the year that it could only withstand by rationing natural gas consumption.indispensable in much of its industry and for heating homes.

The threat is real because at the beginning of June Russia already cut 60 percent of the gas it sent to Germany through the Nord Stream 1 gas pipeline. Gaz-prom announced that it will close it for two weeks in mid-July, supposedly for maintenance work.

See also  Digital Magazine - Information war?, the crisis in Ukraine covered from Russia and the West

(You may be interested in: G7 Summit: opens with new sanctions on Russia and call for unity)

This reduction is not noticeable in Europe in summer because consumption is up to four or five times lower, but it is preventing refilling the deposits to get through the cold winter if the Kremlin does not resume supplies at their normal level.

In addition, Moscow totally suspended gas shipments to Bulgaria, Denmark, Finland, Poland and the Netherlands. And in in recent weeks it began to reduce supplies to other countries such as Austria, Denmark, Italy, France and Belgium.

For now they have been able to substitute with imports of liquefied gas from other suppliers and by returning to burning coal in some places, such as Germany and Austria, but a total closure by Russia would be impossible to substitute and would affect the heart of two key policies of the European Union: climatic and economic.

This impact could alter the political stability of the bloc, threatened by inflation that is growing at the rate of energy prices, which is beginning to have second-round effects and causes the European Central Bank (ECB) is set to raise interest rates in July and probably in September or October.

ECB data shows that if Russia totally shuts off the gas tap, the European Union will go into recession in 2023 and inflation will rise: the stagflation scenario that governments fear and may cause the polls to flip.

The bank maintains that the GDP of the eurozone would fall by 1.7 percent in 2023 in this scenario.

The ECB report also points to rationing: “Disruptions in energy supplies and the limited possibility of immediately replacing gas supplies from Russia will probably require rationing and reallocation of resources, with the result of a cut in production in the eurozone, in particularly in energy intensive sectors.

(Recommended: Biden announces that the G7 will ban gold imports from Russia)

European sources consider that the gradual reduction of gas supplies to Europe does not greatly reduce Russia’s income from its exports, since it sells less but the price is shooting up, so it even earns more per cubic meter exported.

The International Energy Agency (IEA) warned Europe this week that it must accelerate its preparations for the eventuality that Russia stops all energy supplies.

The European Commission and the bloc’s governments agreed in April that by November 1 they would have gas tanks filled to 90 percent of their capacity.

Moscow’s bet seems clear. European diplomatic sources assure that President Vladimir Putin wants to twist the arm of the Europeans to lift sanctions and stop sending weapons to Ukraine, aggravating the energy crisisa, which also causes an increase in inflation. This is what in Brussels is already called “the Kremlin’s energy blackmail”.

Precisely this topic will be one of the most important conversations that will take place at the NATO summit, which will be held this week in Madrid with a great focus on the new rearmament of countries like Germany, after the Russian invasion of Ukraine.

Before this meeting of more than 30 countries, the energy ministers of the European Union will meet today to discuss their energy situation and cover the Repower EU plandesigned by the European Commission to reduce the Community’s dependence on Russian gas by two thirds within a year.

This goal would be achieved through energy diversification, the deployment of renewables, efficiency and the reduction of gas consumption.

In turn, preparation measures will be discussed in the event that Russia orders a total cutoff of gas shipments to the entire European Union bloc.

– Ecuador remains in suspense after 14 days of indigenous protest

– USA: The dangerous setback in civil rights in the hands of justice

– The Diary of Anne Frank: 75 years of a topical publication