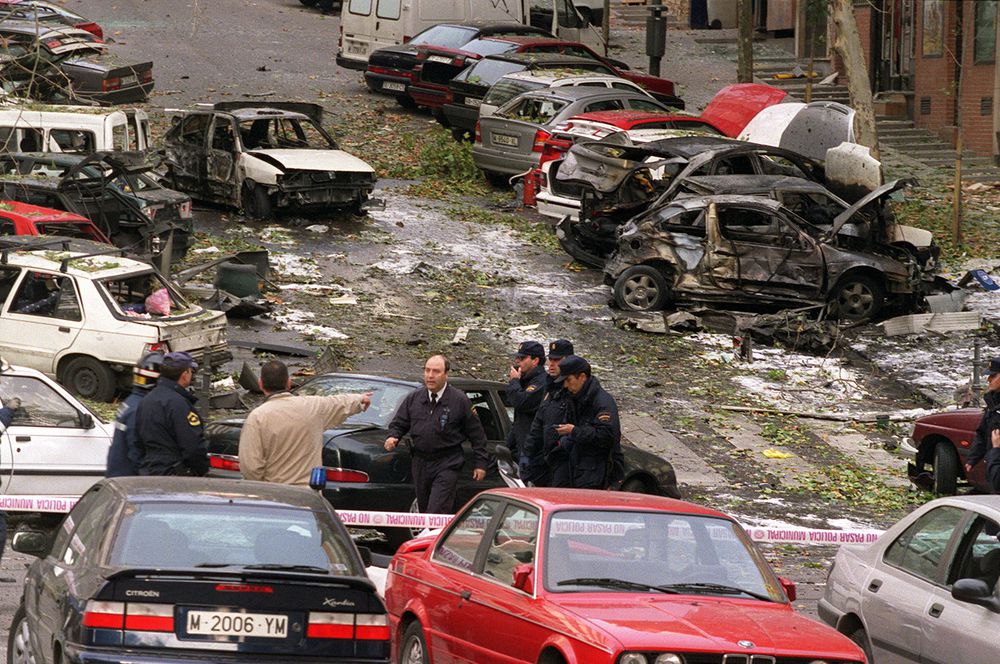 The National High Court has sentenced to 1,008 years in prison Juan Luis Rubenach, 57, from ETA, known by the alias of Txurdo, for 97 assassination attempts between 2000 and 2001, when he was part of the command Madrid —Also called Buro Ahuste-. The judges consider it proven that the terrorist participated in the bomb attack against Juan Junquera, undersecretary of the Scientific Police, perpetrated in Madrid’s Calle Corazón de María on November 6, 2001 and that it left 94 wounded. They also conclude that he participated in the preparation of the attacks to try to kill Paulino Martín, counselor of the Court of Accounts; to the prosecutor Blanca Rodríguez; and to Carlos Aragonés, director of the Cabinet of the Presidency of the Government.

The magistrates, throughout a 92-page sentence issued this Thursday, review the bloody record of Rubenach, who came to be in charge of the training of the new members of the organization, according to the investigators. Brother of Germán Rubenach also from ETA and linked to the gang since the late eighties, Txurdo was already sentenced by the National Court in 2010 to 319 years in prison for murdering General Justo Oreja in June 2001 in an attack that left another 17 injured by placing a bicycle pump at the door of the victim’s home. He was also sentenced in 2014 to another 120 years for his participation in the murder of Lieutenant Colonel Pedro Antonio Blanco in January 2000, a crime with which the gang broke one of their truces.

Rubenach managed to flee after the attack against Juan Junquera on Calle Corazón de María, when the police managed to arrest part of the Madrid command. For almost two years he lost track of him, until he was arrested in December 2003 in France, where he was convicted of belonging to ETA. After spending 15 years in prison, the French country authorized his surrender to Spain in 2019 so that he could continue serving his sentence for the crimes committed here and to be tried in the cases that were pending. Among others, the one resolved this Thursday with the ruling that sentences him to 1,008 years in prison, although the court emphasizes that the maximum limit that he can spend locked up will be 30 years and the time he has already been behind bars will be deducted.

In this last resolution, signed by judges Manuela Fernández, María Teresa García and Ana María Rubio, they are attributed to Txurdo crimes of attempted murder and conspiracy; weapons, ammunition and explosives depot; vehicle theft and damage. Among the evidence wielded against him, his fingerprints were found on two floors used in Madrid and Salamanca by the command to prepare their actions.

The magistrates emphasize, in this sense, that Rubenach was one of the ETA members who decided to commit the attack on Calle Corazón de María. As they insist, the objective was to kill Juan Junquera with a car bomb when his vehicle passed by that road, but they acted knowing that they could cause many more victims. “The mode of execution chosen showed that the perpetrators contemplated, assumed and accepted that, apart from the objective, the explosion would reach a large number of people, equally unsuspecting and defenseless. Well, given the time that had been planned, the street would be crowded with people going to work, businesses or schools. The explosion occurred at nine in the morning.

The judgment also considers it proven that Rubenach participated in the placement of a car bomb several times near the homes of Paulino Martín, counselor of the Court of Accounts; and Blanca Rodríguez, prosecutor of the National Court, “without causing the vehicles to explode for reasons beyond their control,” underlines the ruling, which describes how the convicted person participated, in turn, in the surveillance and the collection of information from Carlos Aragonés, director of the Cabinet of the Presidency, “with the purpose of attempting against his life.”

Sandro and Rafa Mir against Osasuna

Battlefield 6 to be unveiled in May, according to new evidence

Banks Goldman Sachs’ CEO was responsible for the workload of his subordinates: Efforts must be made on behalf of customers