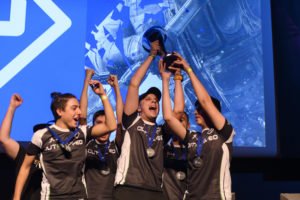 The Spring Season of ESL Flowe Championship, the first tournament export green to the world. It was, in fact, the first CO2 compensation competition, designed to support the environment and raise awareness in the world of Entertainment on Green issues. In addition to the social part, the competitive side of the tournament also had great space, which crowned the champions of CoD is Gran Turismo Sport on PS4.

The main objective of the ESL Flowe Championship was to create an eco-green championship, sensitizing the community to environmental issues and aiming to compensate CO2 emissions globally, through a concrete initiative to support future generations.

The project involved LCA-lab, an environmental research and consultancy company and ZeroCO2, a benefit company that carries out projects for reforestation, afforestation, planting of trees in urban and extra-urban areas in various places around the world.

LCA-lab srl has carried out a Carbon Footprint study simulating a representative scenario which estimated that, during the entire tournament – in which over 1,200 players participated by putting themselves on the line in respect of the planet – CO2 emissions were equal to 64,404 KG CO2eq.

Thanks to these data, zeroCO2 has planted 160 trees which will absorb the calculated amount of CO2eq and which will support peasant families in Latin America, favoring their livelihood.

The titles selected to compete and win the title of national champion were Gran Turismo Sport, in which Giorgio “Williams_Gio” Mangano triumphed, and Call of Duty Black Ops Cold War which saw the victory of the B04 Star.

The finalists shared a prize pool of € 5300 and 3 PlayStation 5, perhaps the most coveted object of the entire competition.