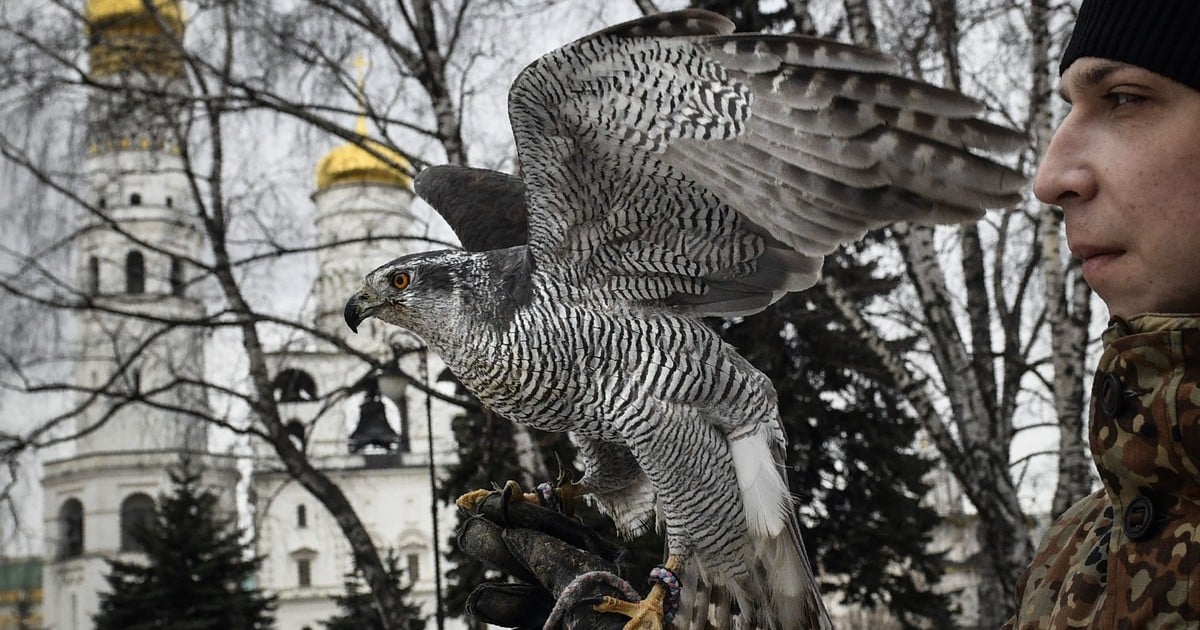 Neither Vladimir Putin, when the Russian president works in the Kremlin, nor the tourists who visit the famous Cathedral Square inside have to worry about the annoying squawk of crows. Astur, Filia, Héctor or Zeus and their other three winged comrades already do it for them.

They are all part of the vigilante brigade the most curious of the Kremlin, the one composed of birds Raptors of different species that since the time of the Soviet Union imposes its authority in the center of Moscow.

The latest addition to that guardian team is Burán, which has recently been presented in society. “This is the first time that we have a snowy owl in the Kremlin ornithological group, and now it is its youngest employee,” said one of its keepers.

It is a male specimen of White owl or nival, and was recruited last year, when it was still a chick, by the Kremlin command of the Federal Protection Service, the agency in charge of the protection of the highest officials of the Russian government and state.

Burán joins the task they are already doing his veteran companions, and that consists mainly of protecting the historical surroundings of the Kremlin and its palaces, and mainly the domes of the cathedrals.

The owl Filia, a veteran member of the Kremlin’s bird force. Photo: AFP

The medieval buildings which are preserved between the red walls of the Kremlin were built between the 15th and 17th centuries and bear witness to the history of Russia.

In the Cathedral of the Assumption, for example, Ivan the Terrible became a Tsar. His remains, along with those of 14 other princes and tsars of Russia, rest in that of Archangel Michael.

Monuments can be seriously damaged by activity and nesting of various birds. Their main threat are crows.

Crow fight. They are a threat to the historical buildings of Moscow. Photo: AFP

The crow is the urban bird most common in Moscow, but its population has increased significantly in recent years.

Ornithologist Vladimir Romanov pointed out last year that the capital and its region suffered an invasion of these birds, on the other hand nothing dangerous.

In this region, some 100,000 copies, but its population multiplies by four in the autumn and winter months.

This proliferation has forced the Government to consider plans to create a brigade of raptors that scare crows and pigeons away from the Government building, known as the White House, in whose surroundings one of the areas with the greatest presence of the scandalous birds has been identified.

But the fight against them began much earlier in the Kremlin. During Soviet times, the soldiers were in charge of driving them away or shooting them.

But in the 1980s the presence of the corvids forced the Kremlin commander to take a drastic measure, and in 1983 he created a falconry service independent that, over time, has given rise to the current ornithological unit.

Well trained and well cared for (they feed on chicken, quail and laboratory mice), the brigade that Burán has joined already includes Astur, a 14-year-old common goshawk, the oldest, and Filia, an eagle owl. of ten, which is the largest of the group, with 2.9 kilos of weight but with an imposing presence thanks to its beautiful and abundant plumage.

His companions are the peregrine falcon Zeus and the saker falcon Hector. The seven components of the Kremlin’s winged brigade they are males. But that may change soon, as there are plans to incorporate a female goshawk this year.

They patrol three times a day, especially when there are no tourists, and with them in the air there is no crow that dares to open its beak.

The birds patrol three times a day, especially when there are no tourists. Photo: AFP

Some of them have been seen on the hand of their caretakers on Saturdays in which, between April and October, there is a changing of the guard ceremony in the Plaza de las Catedrales.

Even the nervous Astur, whom “he does not like ruckus and noisy children dressed in bright colors ”, they stand upright and calm.

Another thing is when they have to patrol the walled territory. During their rounds, they wander over the territory in the hand of their caretaker or fly over the cathedrals and, if necessary, they allow “an attack against the flocks of crows ”.

The winged brigade work in team. “Burán’s job is to act as bait. Snowy owls do not live in central Russia; that’s why when they see a bird like that, the crows think it may be an easy prey”Says his caregiver.

The employee with Burán on the glove attracts the flock of crows to a place where the hawks and the goshawk, who can reach a speed of one hundred kilometers per hour, they will take care of them.