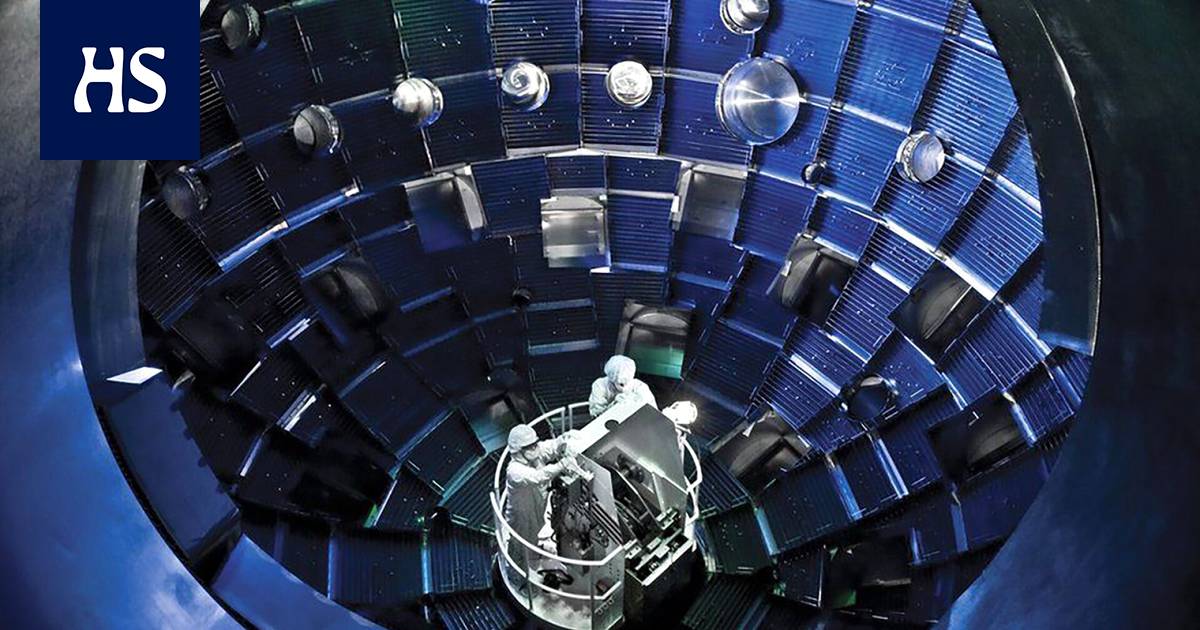 In California, 192 powerful lasers were aimed at a single target. The isotopes contained in the small hydrogen pellet briefly produced fusion and 1.35 million joules of energy.

Nuclear fusion was produced for a while using lasers more than ever in a fusion experiment that succeeded in early August in the United States.

The experiment was performed with lasers at Lawrence Livermore’s National NIF Laboratory in Northern California.

In the experiment, the fusion produced a large amount of energy for billions of seconds, or 1.35 million joules.

It is an amount that momentarily corresponds to ten percent of the amount of energy of sunlight entering the earth at any given moment.

The laser is in blue. It was aligned with a cylinder with a frozen hydrogen pellet in the center. It eventually warmed for a moment to one hundred million degrees Celsius from the force of X-rays. The artist’s view. Picture: Lawrence Livermoren national laboratory

Fusion arose when the energy of 192 lasers was focused into one very strong laser on a target, a small pellet.

The infrared laser was converted to ultraviolet in the target chamber. It was targeted to a small eraser-sized hydrogen pellet shell.

Around the pellet was a plastic shell that exploded from the heat generated by the laser.

There was very cold hydrogen in the middle of the pellet inside the gold cylinder. The laser hit the gold in the cylinder walls and released a burst of X-rays. The object warmed from its force to about one hundred million degrees.

The heat initiated a fusion of two isotopes of hydrogen inside the pellet. These isotopes were deuterium and tritium. They began to form heavier elemental helium while releasing energy.

The isotopes of the element, in this case hydrogen, have the same number of protons but a different number of neutrons. Deuterium has one neutron and tritium has two.

When hydrogen isotopes fused together, releasing a huge amount of energy. The pellet was born for a moment like a little star.

A similar phenomenon takes place on a large scale in the Sun, where tons of hydrogen are converted to helium every moment.

In California, the test released 1.3 megajoules of energy for a moment. However, it accounted for only 70 percent of the energy that was briefly applied to the pellet.

The capsule absorbed some of the targeted energy. Therefore, the reaction itself produced a moment more computational energy than was applied to it, he says online service Science News.

Physicists hope that one day the experiment will consistently produce more energy than it takes to generate it. This would have created a new form of energy production, fusion energy.

Read more: A competition for fusion energy is emerging – The next 15 years will tell whether fusion power is the energy source of the future, says researcher

Old joke that commercial fusion energy is always more than 30 years away. The joke itself is over 30 years old.

The idea of ​​nuclear fusion was first put forward in the 1920s. Experiments with the laser began in 1965.

According to calculations, the energy output of the experiment at the beginning of August was almost eight times higher than the experiments in the spring of 2021 with the same device. The result was as much as 25-fold compared to the experiment in 2018.

Fusion pursued in other ways as well.

A pilot of fusion power is nearing completion in the south of France Iter power plant. There, an attempt is made to produce a continuous fusion in a large fusion reactor. It is an EU project, but there are other players involved, such as China.

It would arise in a large donut-shaped chamber called tokamak. It encloses hot plasma with neutron-containing hydrogen inside strong magnetic fields.

The iter is completed for trial use perhaps in 2025 at the end and is therefore only a pilot plant, not a commercial one.

China reached its latest record in the merger of the tokamak power plant in early June. The country said it received maintained in an EAST tokamak fusion above 101 seconds. The plasma temperature was 129 million degrees.

In California the light was packed into a strong laser in an area the size of three football fields. The small hydrogen pellet was in the center of a target chamber ten meters in diameter.

Livermore lasers are the most powerful in the world. They can produce up to four megajoules of energy.

However, the machinery is heavy. The lasers can be tuned at the Livermore facility only once a day.

Commercial and a working fusion with a laser would require a powerful laser to vaporize multiple hydrogen pellets every single second into the fusion.

So there is a journey into effective fusion. Production would require constant very high temperatures and high pressure, no matter how the fusion is produced by any means.

However, an experiment in August showed skeptics that laser fusion is indeed one option, says a retired physicist Stephen Bodner On the LiveScience online service.

Test was originally designed to study hydrogen bomb reactions. The experiment itself and its results have not yet been presented in a scientific publication.