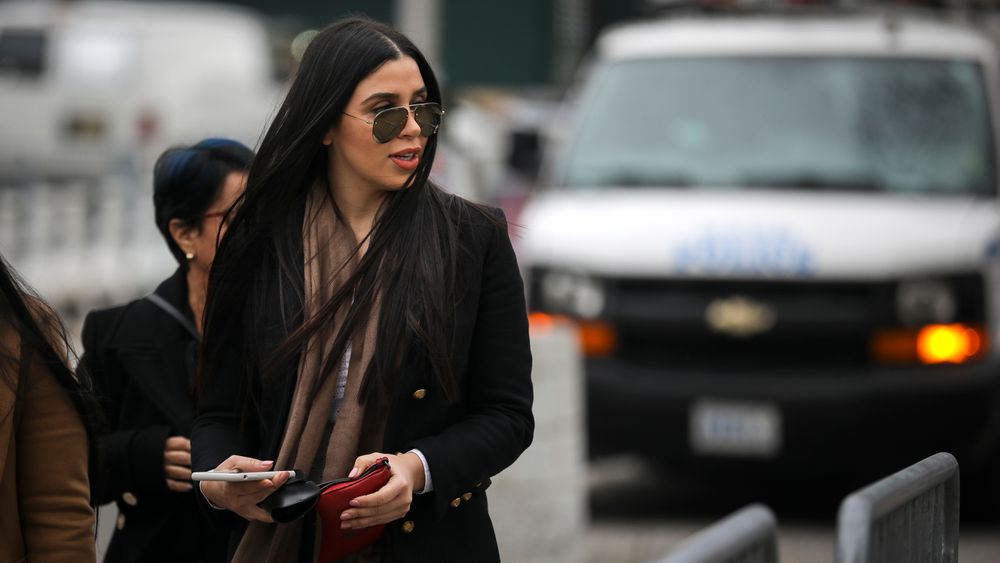 To pass the security control of the Court of New York he had to draw his stilettos. Emma Coronel, the wife of the most powerful drug trafficker in the world, Joaquín El Chapo Guzmán, monopolized all the spotlights of the pink press during the 11 weeks of trial that ended up condemning her husband to life imprisonment in 2019. Because of her styling attached to her curves, she became known in the United States as the Kardashian of Sinaloa. She was the wife of the man who was the most wanted, the most dangerous boss. And he got to participate in a reality show in the United States where other heirs to the drug empire spoke of Coronel as an inspiration. Some had been children or nephews of Colombian or Mexican drug trafficking. But she was the wife: Mrs. El Chapo. This Monday, the morbid that some American television networks have managed to exploit for the intimate life of the drug trafficker has come face to face with reality. Coronel has been arrested at Dulles International Airport (Virginia), which serves the city of Washington. He is accused of participating in international drug trafficking.

Coronel, 31, with dual US and Mexican nationality, faces charges of trafficking cocaine, methamphetamine, heroin and marijuana, according to a statement from the US Department of Justice. He is scheduled to appear by videoconference on Tuesday in federal court in the District of Columbia. In addition, she is accused of having helped El Chapo execute one of the most mediatic escapes in history: his escape from the Mexican high security prison in the Altiplano, in the summer of 2015. The famous escape with a tunnel that connected the shower your cell with a safe house across rails and a motorcycle. According to the US authorities, Coronel was plotting another escape with Guzmán’s people in 2017, shortly before the kingpin’s extradition to the United States.

Coronel met Guzmán Loera at a party on a ranch. She was 17 years old and had just won the Sinaloa beauty queen pageant. He was 51 and already the master of the largest criminal organization in the world. While she was dancing at the ranch with her then boyfriend, a man approached her and said that “the Lord“ wanted to dance with her. “Of course,” I told him. Because in the ranches, even if you have a boyfriend, you have to dance with all the people who invite you, ”he explained in an interview with the Telemundo network. That and that in the context of the Mexican criminal empire saying no to the chief of chiefs was very expensive. Coronel is Guzmán’s third wife.

She is also the supposed niece of Ignacio Coronel, one of her husband’s lieutenants. “We are not family,” he settled in the interview and added that Guzmán is “a good man, he is not violent or rude, I have never seen him say a bad word. His girls adore him and constantly ask about him ”. “I am not aware that he is dealing in drugs. I’m in love with him ”, she always insisted in front of the cameras.

The Coronel surname is too heavy in the criminal history of this country. Ignacio Coronel was also known as the Crystal king, was number three on the Sinaloa Cartel, below El Chapo and Ismael May Zambada – the only member of the group from that time who has not yet been arrested. Coronel was responsible for the main methamphetamine trafficking to the United States for at least 12 years, until he was killed on July 29, 2010, in Zapopan, Jalisco, during a shootout with the Mexican Army. One of her sons, Alejandro Coronel Mardueño, Emma’s possible cousin, was also kidnapped and murdered in 2010 when he was just 16 years old by his rivals, the Beltrán Leyvas, which unleashed a wave of violence in the country.

One of the most tense moments for Coronel during the El Chapo trial occurred in January 2019. The prosecution, with the drug dealer’s wife present at the hearing, presented a series of messages intercepted by the FBI between the capo, his wife and his lover. In one of them, the then leader of the Sinaloa Cartel asked him to buy dye for his mustache and talked about how one of the twin daughters, María Joaquina, was not afraid at all. “I’m going to give you an AK-47 [un Kalashnikov] so he can go with me, ”he joked.

The words of Emma Coronel about the ignorance of her husband’s business collapsed in the trial. In the messages, Joaquín Guzmán gave him precise instructions on how to communicate. He advised him, for example, to use Blackberry phones — because of their encryption — and to contact the cartel technician for help. In another of the exchanges, Coronel tells El Chapo that he thinks the police are going to show up at the house. “Do you have a weapon?” Asks the narco. She replies, “yes, one of yours, the one you gave me.” Guzmán asks him to hide her in a safe place. She also advised him to lead a normal life, because he knew that she would be used to locate him. The messages were sent between the end of 2011 and the beginning of 2012.

And they revealed the open secret, the infidelity of the drug dealer. The FBI mentioned one of his collaborators, Agustina Cabanillas Acosta, who was arrested in the February 2012 raid, and whom the capo addressed as “my love.” According to the messages, El Chapo also discussed with Cabanillas Acosta about shipments and sale of cocaine and marijuana in the United States.

Coronel tried to capitalize on the fame generated around her image, always in the shadow of her husband, promoting a brand of clothing and mechandising of all kinds: caps, sweatshirts, mobile cases and t-shirts. The name El Chapo Guzmán was filed with the United States Patent and Trademark Office and his logo was the head of a lion along with the three words. She was not the only one in the family to create a business of this type and launched herself into competition against another of the narco’s daughters (she has at least 10 recognized), Alejandrina Guzman Salazar, who did the same with El Chapo 701, for the number that the narco had in prison.

In one of the television commercials of the VH1 network, the appearance on the reality show of Mrs. El Chapo was offered with expectation. On the prow of a luxurious white yacht, Coronel appeared smiling, dressed in white with sunglasses that covered half her face. “When the boss of bosses calls you, you can’t say no,” pointed out one of the protagonists, Michael Corleone Blanco, the youngest son of Colombian drug trafficker Griselda Blanco de Trujillo. Welcome to Crew Poster, they announced. “She is a true Latina, loyal to her man,” added Blanco. These days the US Justice will evaluate how loyal he was to one of the most powerful drug traffickers who introduced hundreds of tons of drugs to the United States.

Iván Cruz: the cast of Yo soy wishes the singer a speedy recovery