Emirati women in the front lines of military companies in IDEX 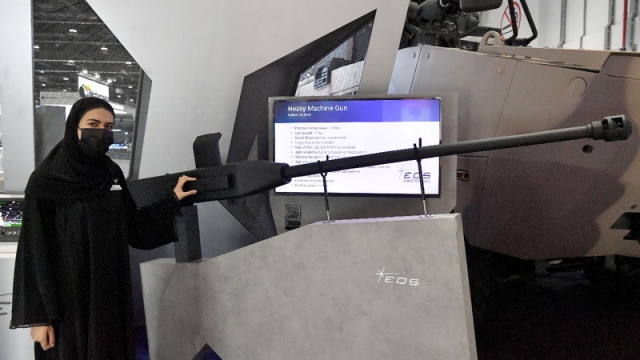 The activities of the IDEX exhibition, which is currently held in Abu Dhabi, witnessed a remarkable presence of Emirati female cadres, including engineers, marketing and sales officials, as they presented the front rows of the wings of the national military companies that reached 144 companies participating in the exhibition, to explain the capabilities and advantages of locally manufactured military products by Emirati hands. For delegations and foreign visitors from all over the world.

National companies participating in the exhibition confirmed that they are keen to attract more female cadres to work in the fields of military industrialization, whether in production lines, design and innovation, or management, marketing and sales, as Emirati women have demonstrated high capacity and competence in this field over the past years.

The mechanical design engineer, Amna Al-Ahmad, from EOS Defense Systems, gave an explanation about the company’s latest products, including the “14.5mm” weapon. She told «Emirates Today» that the weapon was manufactured and designed in the UAE for the first time by Emirati hands, and it weighs 45 kg, is characterized by high accuracy, and can carry three types of ammunition.

The spokesperson for the IDEX and NAVDEX 2021 exhibitions, Lieutenant Colonel Pilot Sarah Hamad Al Hajri, said in media statements that Emirati women have entered the defense industries field, through national companies, whether in production lines in the fields of armament, training, and electronic warfare. Or in the field of technology, and information technology.

The director of commercial affairs at Nimer, Fatima Al-Ahbabi, said that she “did not find it difficult to adapt in this field,” stressing that the female component is present in a large number, in all fields.

National companies specializing in the fields of aviation, military defense and military manufacturing confirmed that the percentage of female national cadres working for them has reached 50%, as they have demonstrated high creativity and innovation ability, and achievement of achievements, whether in technical or administrative jobs.

“JAL”, a regional provider of integrated solutions to support aircraft for military and civilian clients, stated that it currently employs 5,000 people in its workforce, of 71 nationalities, of which the Emiratis represent 27%. During the IDEX exhibition, “JAL” signed a partnership contract with the Abu Dhabi Institute for Vocational Education and Training to train and encourage talented and concerned Emirati students to join the maintenance and repair sector cadres in Abu Dhabi. The company will train them on the latest operations and maintenance and repair systems at its facilities in Abu Dhabi, with the aim of employing them and joining them into the workforce. Upon concluding their educational programs.

“JAL is aware of its important role in building the capabilities of young Emiratis from specializations focused on engineering and aviation to join our team of experts and specialized technicians, and in line with our commitment to the sustainability of the maintenance and repair sector in the UAE, our partnerships will work on Enabling Emirati students to lead promising careers in the field of maintenance, repair, overhaul and aircraft sustainability.

Dr. Abdulrahman Jassim Al Hammadi, from the Abu Dhabi Institute for Vocational Education and Training, said: “Our strategy aims to enhance the role of technical and vocational training in producing a new generation of Emiratis who are qualified to perform highly specialized jobs, provide innovative services, and provide world-class products, made proudly in the UAE.”

The official spokesperson for the IDEX and NAVDEX exhibitions, Brigadier General Muhammad Khamis Al-Hassani, said that “the total foreign deals amounted to one billion and 167 million dirhams, representing 21% of the total value of deals, while the value of local deals amounted to 4 billion and 425 million dirhams, corresponding to 79% », indicating that the contracts were distributed to six foreign companies and six local companies.

Among the most prominent local deals that concluded a deal with the “Yas Holding” company, to buy Korean CHUNMOO launchers and missiles for the benefit of the Land Forces, worth 2.955 billion dirhams, and a deal with Abu Dhabi Ship Building Company for comprehensive technical management services for boats and ships of the Navy for the benefit of the Navy at a value of 650 million AED, and a deal with (Vallo Equipment) company to provide technical support for the supply of all spare parts for Tatra and Armed Forces vehicles for the General Maintenance Corps Command with a value of 60 million dirhams, and a deal with (Unilux Heavy Equipment) worth 30 million dirhams, to provide support services The technician for the Dhabian armored vehicle, the H45 gun, the Leclerc tank and the BMP3 tanker for the General Maintenance Corps Command.

Mohammed bin Zayed: We are able to host global events in various circumstances

A new video shows how the attack on the United States Congress was: the then vice Mike Pence had to run