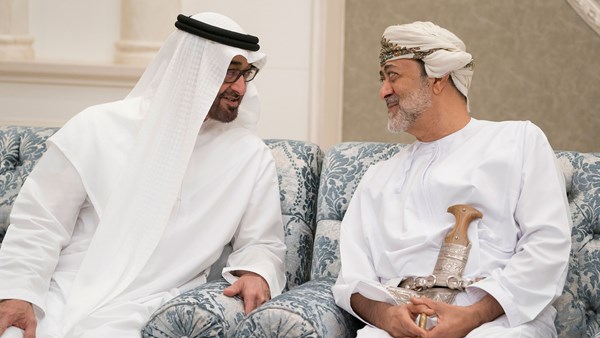 The fraternal relations between the Sultanate of Oman and the sisterly United Arab Emirates are based on common and solid foundations, framed by historical, cultural, social and economic ties and cooperation. aspirations of the two brotherly peoples. The two countries link diverse social, cultural, political and economic relations, united by historical and geographic ties, characterized by rapprochement based on good neighborliness, social ties, and ties of origin, blood, lineage, language and religion. The two peoples for thousands of years.
The nature of the relationship between the Emirati and Omani peoples is that it is familial, as the two countries have very deep historical relations, and the most prominent pillars of this relationship are religion, language, lineage and the same roots of tribes, families and neighborhood with long common borders, common history, and the unity of interests, and these relations are not limited to taking into account interests and constructive cooperation in Not only are the areas of common interest, but the relations have always been of a special nature distinguished by what brings the two countries together of sincere brotherhood, rapprochement and geographical overlap based on good neighborliness and close social and family ties that enjoy great prestige among the two brotherly peoples and are supported by the ties of history and common Islamic, Arab and Gulf affiliation.
The Emirates are linked by land borders with the Sultanate of Oman, and there are five land ports linking the two countries, including: Al Wajaja port between the Sultanate and the Emirate of Dubai, the Wadi Al Jizi and Hafeet ports between the Sultanate and the city of Al Ain, the Khatma Milaha port between the Sultanate and the Emirate of Sharjah, and the Tibat port between the Sultanate and the Emirate of Ras Al Khaimah. In recent years, economic and commercial cooperation relations between the Emirates and the Sultanate of Oman have grown, and the Roads and Transport Authority in Dubai and Oman Transport have launched an international bus route between Dubai and Muscat in a move aimed at enhancing land transport and facilitating the movement of passengers between the two countries. Bus trips for this line start from Abu Hail Bus Station The price of a one-way ticket is 55 dirhams.
This was considered an important step in the way of expanding and strengthening the international transport network between the two countries, and the beginning of an integration project in the transport network between the two countries. .

Cultural Heritage
The common elements of cultural heritage between the Sultanate and the Emirates include several elements, most notably: the participation of Omani theater groups in all theatrical and artistic festivals in the Emirates, the art of the family, which was documented by “UNESCO” as a common pattern on the list of intangible heritage, dagger making, saktoun shooting, and many others.
The UAE and Oman have reached a joint agreement on documenting the art of “Ayyala”, which is one of the folkloric arts in which men display folk songs and chants, with UNESCO as a common pattern, especially since the social interaction and the participation of the tribes of the Emirates and Oman in many inherited manifestations, makes coordination in Cultural work is required as an entry point for documenting, reviving and preserving heritage, in cooperation between specialists in the two countries.
Shipbuilding is also one of the joint industries between the two countries, but the Omanis have excelled in this industry for thousands of years, and the Omani city of Tire was the most famous city on the Indian Ocean in building ships. The Emirati and the Omani have a special place among Omanis and Emiratis, which is witnessing a remarkable presence of hundreds of both sexes, males and females.

tourism movement
The tourism movement from the Emirates to the Sultanate is witnessing a significant growth through the land and air routes linking the two countries, and many Emirati carriers organize daily trips to Muscat and other tourist places in the Sultanate. It has unique and attractive landmarks and unique shopping opportunities, in addition to the multiple options in entertainment and entertainment, which are the most important reasons why Dubai attracts Omani tourists. As many Omani families are present in all major festivals and celebrations in Dubai.
The total number of Emirati visitors coming to the Sultanate of Oman through various ports until the end of March 2022 amounted to 131,585 visitors. The two brotherly countries have common visions regarding the tourism sector, as Omanis participate strongly in all tourism events in the United Arab Emirates.
It affirms the strong and solid relations between the two brotherly countries, and their special nature, as they are not limited to interests and constructive cooperation in various fields, but are based on a unique model of sincere brotherhood, good neighborliness, kinship ties, and close social and family ties that enjoy a great prestige among the two peoples. The two brothers, pointing to the distinguished level of trade and investment cooperation between the UAE and the Sultanate of Oman, which demonstrates the strength of the existing economic partnership between the two countries and its positive and promising prospects for the future.
The joint efforts between the Sultanate of Oman and the United Arab Emirates have contributed to realizing many of the aspirations of the peoples of the two brotherly countries. The Sultanate of Oman and the UAE are the first two countries of the Cooperation Council for the Arab States of the Gulf to adopt the ID card as a document for the movement of their citizens instead of passports since 1993, which is What has been adopted and circulated within the framework of the Cooperation Council for the Arab States of the Gulf, in addition to the fact that the United Arab Emirates is the first trading partner of the Sultanate of Oman according to the volume of exports, imports and re-export trade between the two countries.