«Emirates Education» adopts the schedules for the remedial exams 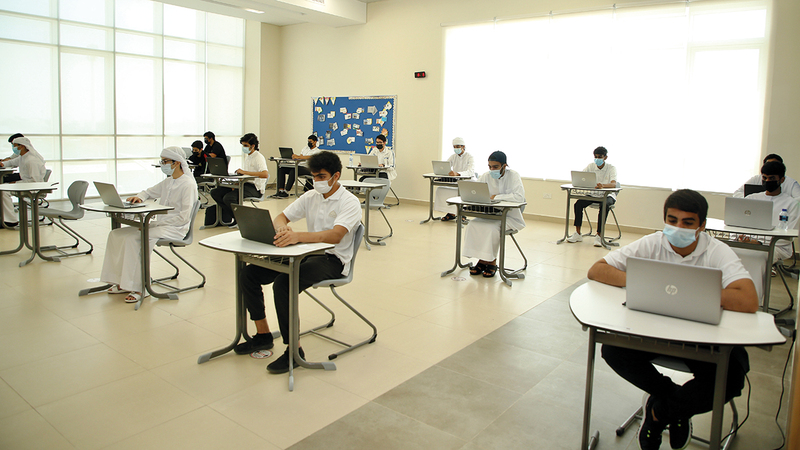 The Emirates Foundation for School Education has finally approved the schedules for the make-up exams, which will start on the 20th of this month, for students in grades four to twelve in public and private schools, which will be performed by students who are absent with an excuse, or who have encountered technical malfunctions during the end-of-semester exams. Third, adding that the targeted students are those who missed the end of the third semester exam with an acceptable excuse, as well as those who faced technical problems during the application of the final exams.

The Foundation stated that the compensatory exams that the students of grades four to eleven will take virtually from their homes, while students of the twelfth grade in the subjects of group (A) will take them electronically, by attending schools, noting that the “twelfth” students from private schools, They will apply for the make-up exams in the same examination committees in which they took the exams at the end of the third semester.

Examinations for all stages start on June 20 to 24 for all tracks, except for the applied track, in which registered students end the exam on the 23rd of the same month. The compensatory exam targets students who missed the end of the school year exam with an acceptable excuse, and who encountered technical problems during the exam.

The exam is applied to students from the fourth to the eleventh electronically from home, provided that it is in attendance in schools for the twelfth students, provided that the tests are limited to the subjects of group (A).

On the first day of the exam, the twelfth students will perform mathematics and social studies, at an hour and a half for each subject, provided that the exam begins at nine in the morning and ends at twelve thirty. On the second day, students are tested in Arabic language and health sciences, while students perform Elite Arabic language exam only.

On June 22, students will be tested in physics and Islamic education, then English on June 23, chemistry on June 24, and chemistry or biology for general students.

The Foundation stated, through the guide to the preparation of the Emirati school for the exams of the third semester, for the academic year 2020-2021, entitled “We lead it”, that the re-exams for the twelfth grade are limited to students who have not achieved a passing grade in one or more of the subjects of Group (A). After the issuance of the end-of-year result, the student must take the re-exam to achieve the passing grade, bearing in mind that the smart summer semester program does not include twelfth students.

The re-examinations also target students in grades “fourth to eleventh” in the event that they do not achieve a passing grade in one or more of the subjects of group (A), after the issuance of the end-of-year result, where the student will be enrolled “automatically” to the smart summer classes program, to be able to From applying for the re-exam, and achieving the passing score.

Regarding the improvement exams, she stated that they target twelfth students who wish to raise their final grades by no more than 10% in “Arabic, English and Mathematics” subjects, and the student can apply for these exams on the dates specified for the re-exam.

On the other hand, the students of the twelfth grade (general, advanced, elite and applied tracks), yesterday, took the English language exam, in one exam form, unlike previous exams that came with more than one model.

Standardization of the exam form

They added that the English language exam came to measure conclusion and thinking, and took into account the individual differences of students, and did not require memorization as it was in the previous curricula, and its questions took into account the learning outcomes, as they were inspired from within the textbook.

• The “compensatory” targets “absentees with an excuse” who faced technical malfunctions in the final exams.