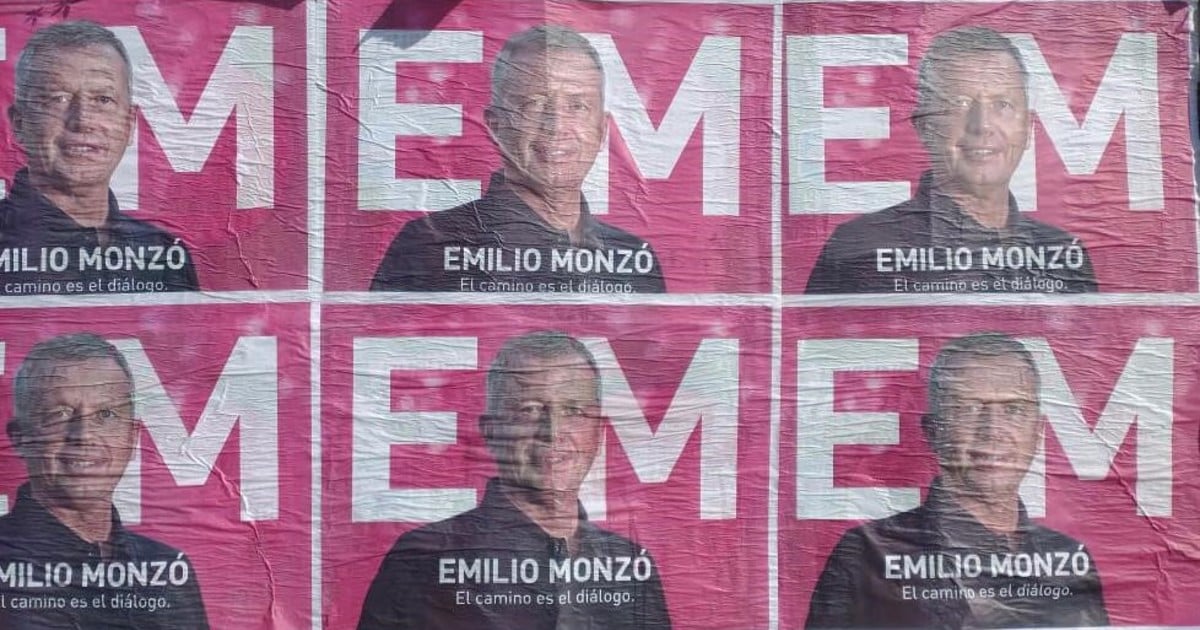 Twenty months after his exciting last session as president of the Chamber of Deputies, Emilio Monzó is making his debut. Is that in the last days his face reached the walls of the AMBA, as part of its launch to compete in the PASO 2021. And from there it was projected to social networks, where a sticker of its posters was made viral in an unthinkable way.

Monzó, 55, is willing to compete within Juntos por el Cambio for the 2021 elections. He has already warned that he will be a pre-candidate for national deputy for the Province of Buenos Aires, with the Dialogue Party, which is part of the main opposition coalition.

However, his gaze rests on a major prize: the elections for the Buenos Aires governorate in 2023.

The posters of Emilio Monzó that went viral.

While JxC’s tough internals are being settled, his name too began to circulate in the streets, both the City and the Province of Buenos Aires.

First it was with his signature and the slogan “The path is dialogue”, the battle horse of the one who withdrew from the presidency of Deputies in November 2019 to an ovation.

The new posters are of a hot pink, the same tonality that it uses in the communications of its social networks. “It is part of the JxC color gamut “, they clarify in their team so as not to give rise to doubts of their -at least current- belonging.

In the lower margin of the poster is your name and your header phrase. In the foreground, the figure of the former deputy and his initials, EM.

The problem – or the opportunity, according to the consultant on duty – was the uncalculated: when one ballot is pasted next to another

It all started in the networks

It was on Twitter that a photograph of Monzó’s posters was disseminated. Six posters stuck to the fence of a construction site that became the viral of this Tuesday.

Their repeated initials, in continuity. And as with that controversy about the two-color dress, users saw what they wanted. Or what they could.

Posters of Emilio Monzó in the Province. The former head of Deputies also signs up for a 2021 candidacy.

There were those who believed they read “MEME”, as those images that travel on networks are called and that reach WhatsApp groups at the speed of light.

Another thought he was guessing certain intentionality of the communication team of Monzó to gain lockers in the virtual conversation and thus put pressure on the intern of Juntos por el Cambio.

The comments for the posters of Emilio Monzó.

“Monzó: I need something to steal votes from the MM list in the intern. Campaign team: say no more,” said @matiwasser.

From their surroundings, however, they perjured that it was all a coincidence. Even if not necessarily a mistake.

There were those who, at first glance, recalled a former president.

“The campaign director of Monzó is very good, we are all talking about him, because Menem is read in advertising,” wrote user @ dosinaga2. “Carlos Saúl Monzó”, another hastened to define it.

And he continued in politics

The repercussions did not remain in the networks. Several political figures they wanted to communicate with Monzó , intrigued by the episode.

Speculation about the posters of Emilio Monzó on social networks.

They called him from PRO. Several radicals also communicated with him, among them, it transpired that there was a call from Martín Lousteau.

They wanted to know if it was fake or searched. “I have no idea what happened on the networks, but the posters and the campaign have been launched for two months,” Monzó said.

From the player environment less aligned of JXC admit that with the sight in the campaign and raising the profile, the for now pre-candidate is much more attentive to the networks.

“He is giving him more ball, without a doubt,” they accept. But his opinion was not known before the virality.

And they also rushed to clarify that another poster is not official that circulated in recent weeks, very similar to an old one by Sergio Massa.

Monzó prepares to go to PASO. His possible opponents are Jorge Macri, the former President’s cousin, and Facundo Manes, the star that the UCR got to compete in the Province.

“This Wednesday the radical party will present Facundo. It is a very good contribution. It has been decided. It will be very good. I don’t know if there will be a STEP with all those actors. There is a lot of dialogue between us. But if there is a STEP, welcome that people can decide“, Monzó said this Tuesday in A24.

The primaries are set for September 12, according to this year’s reformulated election schedule. A long time in Argentine politics. Anything can happen.

For now, one of the Buenos Aires pre-candidates – perhaps without intending to – has already signed up in the digital conversation.

And in the campaign, as in other areas, some experts assure that there is no good or bad publicity. As the maxim says, “there is only advertising.” If it is viral, the better.