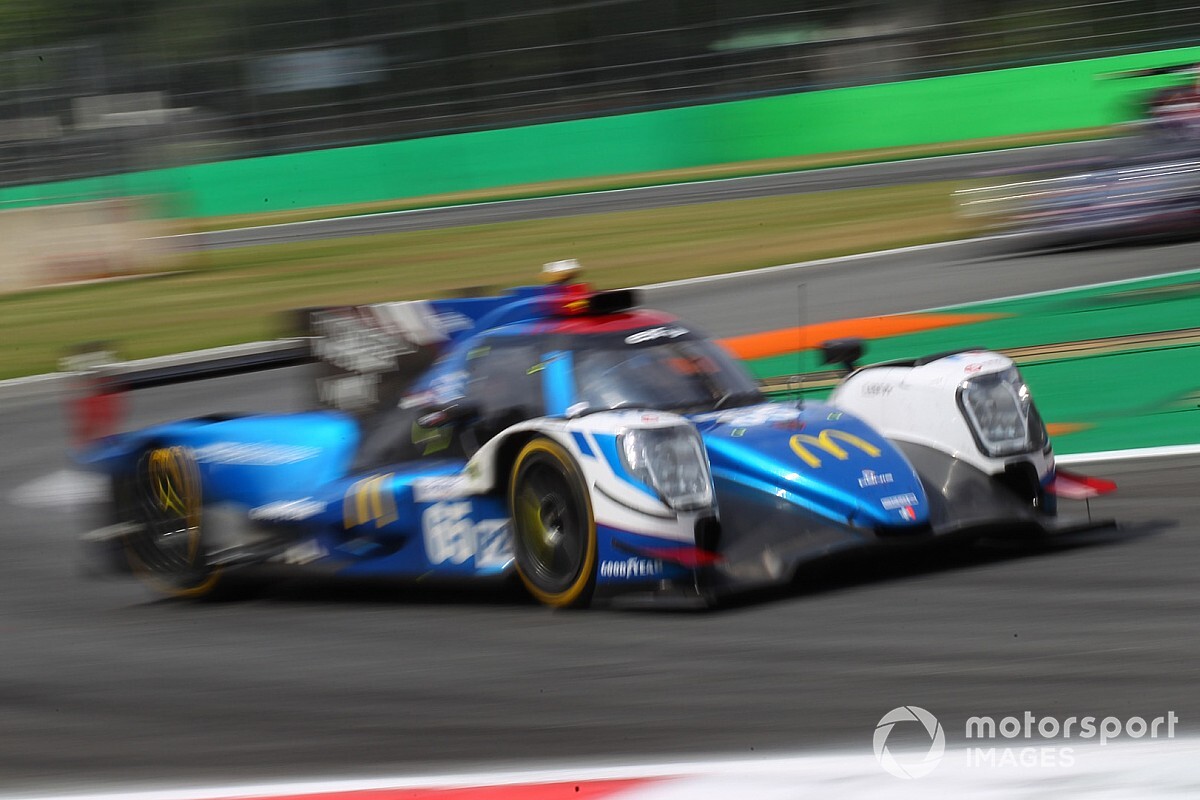 Five years after their debut in ELMS, Panis Racing takes their first victory at the 4h of Monza.

Will Stevens crossed the line victorious in the Oreca 07-Gibson # 65 shared with Julien Canal and James Allen, 5 “ahead of Tom Gamble in the United Autosports Oreca # 22.

In LMP2 Pro-Am comes the second success for G-Drive Racing with the Aurus # 25 of John Falb, Rui Andrade and Roberto Mehri, sixth overall and recovering from 14th place.

At the start it was their teammate Roman Rusinov with # 26 who turned first at turn 1, followed by Phil Hanson’s Oreca # 22, while Hendrik Hedman’s # 21 (DragonSpeed ​​USA) and Richard Bradley’s # 24 (Algarve Pro Racing) touched each other by going into a spin and creating a bit of confusion among all those to follow.

In third place went the Oreca # 41 of the Orleans Team WRT in the hands of Yifei Ye, who began to undermine the first two, also pulling behind the # 92 driven by Giedo Van Der Garde (Racing Team Nederland).

Canal instead found himself fighting for the Oreca # 34 of Salih Yoluç’s Racing Team Turkey and the French, after a first unsuccessful attempt, overcame it, while the Turkish had to serve a stop & go for dangerous driving, thanks to an accident with the Oreca of Algarve Pro Racing.

At half an hour, Hanson passed Rusinov, who then lost second place to Ye as well, with Van Der Garde fourth attacked by Patrick Pilet’s Oreca # 28 (Idec Sport).

After 40 minutes, the Proton Competition Porsche # 77 ran into the sand after a spin and United Autosports called Hanson for a stop before the Safety Car entered.

Others also took advantage of the episode – including Panis Racing – and with the pit lane closed for 3 laps, many had to make an emergency stop to avoid running out of petrol, including Team WRT.

In this way, the Aurus # 26 of the G-Drive returned to the lead, but Rusinov sensationally slowed down at the Parabolica as soon as the SC turned off the lights, starting to zigzag for fuel.

The Russian planted himself right in the pit lane in front of his colleague Richard Bradley, who with the Oreca # 24 decided to give him a push to his pitch. This move cost 5 “to be served at the next pit stop for both of us.

At the restart, Hanson found himself with 6 “on Canal, the Oreca of BHK Motorsport in the hands of Sergio Campana third with 40” on the # 70 of Esteban Garcia (Realteam Racing).

At 90 ‘another car in the gravel for a new Full Course Yellow. United Autosport and Panis Racing recalled their respective # 222 and # 65 for the stop, and Allen went out ahead of Aberdein.

Another FCY after 105 ‘due to debris on the track, immediately collected by the commissioners.

In the next round of stops, Stevens took the wheel of the # 65 with 10 “on Gamble, which slowly began to gain up to 5” in view of the last stops in the pits.

The Oreca # 22 at Lesmo 2, however, found itself in front of the Ligier # 6 of Nielsen Racing stuck in the gravel near the curb and to avoid it Gamble had to put the wheels off the track. FCY to recover the LMP3 and restart with 30 ‘to face.

Gamble got closer to the leader and Louis Deletraz in Jaafar with the # 41, but Stevens was icy and took home the victory, while the Jota took the third step of the podium.

In LMP2 Pro-Am the second place goes to Racing Team Turkey, with the Ultimate third after a good fight with Cool Racing.

LMP3: another success for DKR

After signing the first victory at Le Castellet, DKR Engineering imposes itself with its Duqueine-Nissan # 4 at the 4 Hours of Monza.

At 21 “from them we find the Ligier # 2 of United Autosports with Wayne Boyd on it, while the # 13 of the Inter Europol Competition finishes third.

De Barbuat held the lead at the start, but then he gave the lead to Martin Hipper with the # 13. Rory Pentinnen’s Graff Ligier # 9 spun the Ascari on the opening lap due to a puncture in the rear left. The Finn was able to get the car back to the pits, but the damage to the bodywork suffered by the delaminated rubber made the stop longer than necessary.

The first three cars (# 13, # 4 and # 2) fought each other for a long time. De Barbuat held up to 2021 LMP3 Champion Rob Wheldon until lap 11, when the British driver overtook him by passing second.

Race leader Hippe then had the Ligier # 2 in the mirrors for the next 20 minutes before the Safety Car.

In the second half, Wheldon was ahead of Hippe after pit stops and United Autosports’ Ligier # 2 stretched the gap on Mike Benham’s # 15 RLR Msport.

Sebastien Page’s Graff Ligier # 8 spun the Ascari causing an FCY, with the # 2 pitting, giving way to # 15 on the RLR MSport, before Benham headed for the pit. lane, just before the second FCY to recover debris at the last corner was decreed.

This put Inter Europol Competition Ligier # 13 in the lead with Mattia Pasini at the wheel, DKR Engineering second and Charles Crews in Team Virage’s Ligier # 20 in third place.

With an hour left, Ugo De Wilde was in the lead 22 seconds over Hörr’s Duqueine # 4, when Nielsen Racing’s Ligier # 6 with Austin McCusker on top collided with Duqueine # 4 at Turn 7; McCusker received a black and white flag from the race director.

The third FCY period was declared to recover the car, Hörr headed to the pits to return the car to De Barbuat and the Luxembourg team took advantage of it to come back first as the Ligier # 13 was still running at low speed.

The restart took place before De Wilde could return to the pits and the Belgian driver returned to the track in fourth position, with Wayne Boyd’s Ligier # 2 second and Cool Racing’s # 19 driven by Niklas Kruetten third.

Kruetten and De Wilde fought for the last position on the podium, with the Belgian eventually winning just before the checkered flag.

First victory of the season for the Spirit of Race, with Duncan Cameron, Alessandro Pier Guidi and David Perel having to do their utmost in the Ferrari # 55 to get the best of Miguel Molina’s (Iron Lynx) # 80 in the final hour of the race.

Perel crossed the line just 2 seconds ahead of the Spaniard and the AF Corse Ferrari # 88 completed the podium.

Cameron took the lead at Turn 1 and maintained his lead despite a pitfall from François Perrodo (# 88) and Christian Ried’s Porsche # 77 (Proton Competition).

Rino Mastronardi with the Ferrari # 80 of Iron Lynx recovered from the back of the grid and by the fifth lap he had already passed Ried, with Perrodo taking the lead on Cameron, who soon after gave way to Mastronardi as well.

The latter approached the leader, inducing him to make a mistake at the Canal and passing first.

The Safety Car entered due to the Porsche # 77 crashing into gravel, but Ried was able to return to the pits shortly after.

Mastronardi restarted ahead of Perrodo and Cameron, with Rodrigo Sales’s Ferrari # 66 (JMW Motorsport) in fourth position.

At the following pit stops the Ferraris # 80 and # 88 entered the pits together, with Perrodo regaining the track ahead of Mastronardi.

The 488 # 60 of Iron Lynx with Claudio Schiavoni on it was first in front of John Hartshorne (# 95 TF Sport Aston Martin) and Ferrari # 83. However, Mastronardi and Perrodo returned to first and second position at the Parabolica after 100 minutes of racing.

FCY’s first period saw the cars stay out with Mastronardi ahead of Schiavoni at the restart, but Perrodo quickly moved up second and Cameron third.

The # 95 Aston suffered a puncture in the left rear tire forcing Ollie Hancock to slowly drive the car back to the pits. With 90 minutes of racing remaining, the # 55 Ferrari moved up to second place, with Pier Guidi ahead of Collard.

In the next series of pit stops with just over an hour to go, Perel found himself leading the # 55 Ferrari with just a few seconds against the # 80 of Iron Lynx in the hands of Molina, who overtook the South African. The two continued divided by 0 “5, with Giorgio Sernagiotto’s Ferrari # 60 (Iron Lynx) and Alessio Rovera’s # 88 at loggerheads.

The third and final FCY saw the leaders make their way to the pit lane, exiting in the same order with 30 minutes of racing remaining. The 488 # 55 and # 80 were separated by less than a second, the # 88 of AF Corse was 12 seconds in third.

Perel and Molina fought for the top, but the traffic allowed the former to gain something in the last 10 minutes, winning with 2 “8.

Here are the requirements for Far Cry 6 on PC | Atomix