Elisa Carrió’s show in support of María Eugenia Vidal: the SIDE, its matriarchy and insults in common 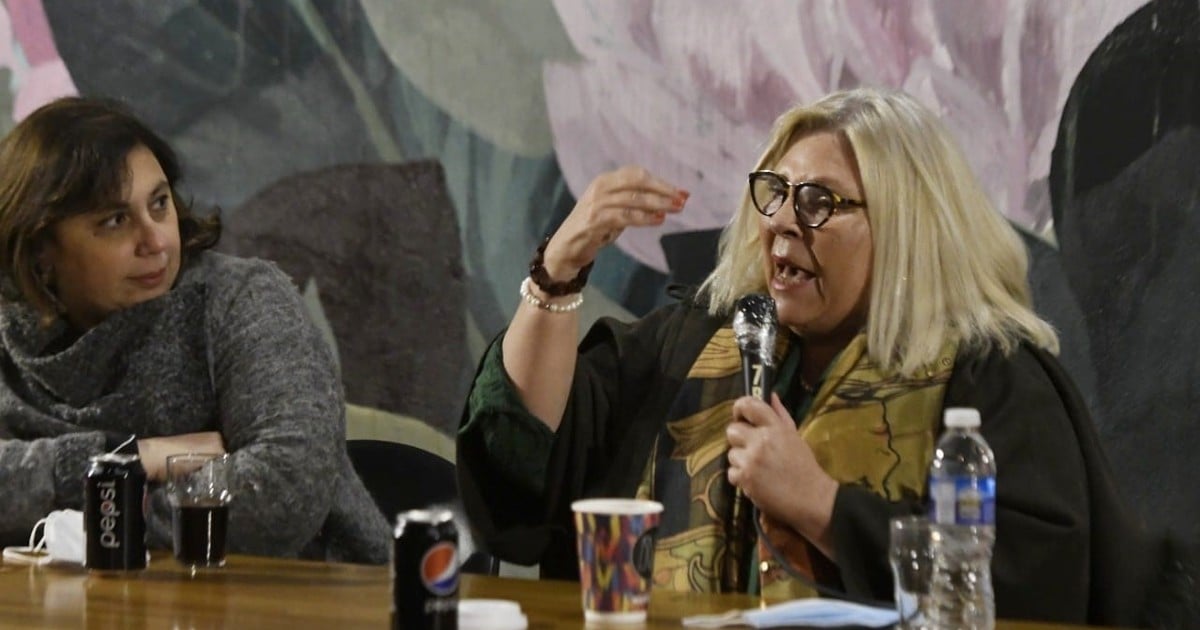 Elisa Carrió led an act on Tuesday towards the 2021 elections, with María Eugenia Vidal. The referent of the Civic Coalition defended the Buenos Aires candidate of Together for Change and crossed the criticism for the jump of jurisdiction: “They cannot say that she is corrupt, fat, whore or crazy”. In addition, he accused the SIDE, spoke of feminism, “the arrival of God” and left a message to the Argentine grandchildren.

It was a Lilita in full show, transmitted by Instagram and in his sauce.

For almost an hour, Carrió walked -sometimes zigzag- along the your personal agenda. There was time for religion, for intelligence services, for the left, for the right, for the youngest and for the PASO.

A good part of his speech was dedicated to Vidal. Right from the start she was affectionate with the former Buenos Aires governor, whom – hurried by her agenda- gave permission to leave the act in Caballito.

“First I want to say that María Eugenia has all the right in the world to be a candidate for the City. If they didn’t argue with me for going to the City, wouldwhy they argue Someone who was vice-chief of the Buenos Aires government? “, asked the founder of the space that was Cambiemos.

He came out at the crossroads of criticism that focused on the jump of jurisdiction that Vidal gave. Along these lines, he questioned Daniel Scioli and Victoria Tolosa Paz, a candidate in the Province of Buenos Aires.

“It is a matter of orchestrated propaganda And it is against women. Scioli was never questioned that he was governor of Buenos Aires. Neither did Kicillof. Neither will the candidate of the FPT, who lives here (Tolosa). They only question Vidal, because it is the only thing they can tell you“said Carrió, in a feminist way of the times.

He also did a reading on the misogyny register on the questioning of Vidal. And he referred to his personal experience.

“The only discriminated against in this nation is here. They told me crazy, old, fat, dirty, everything “, exaggerated the ex-deputy to later warn her truth:” Never, no feminist women’s movement said anything“.

“I defend the right to women to be people, but different from men. And not a reverse machismo. They tell me the worst of all … I love being the worst of all! “he said at another time.

She continued with her particular interpretation of feminism: “To us we like the house, I love the home, the table well set. Now men look like women: they like to cook, now they can cry. I want to be a housewife and a housewife we ​​will always be, because that is the true matriarchy. And we like to work outside, too. “

Accusations to the SIDE

The time has come to evaluate the broad Argentine political spectrum. There, too, Carrió left another warning: accused the SIDE -what today would be the AFI, the Federal Intelligence Agency- to finance the campaign of “emerging” parties to subtract votes from Together for Change.

“Consult who finances the electoral campaigns of emerging countries. I have had an experience. When I was the first candidate for deputy for Capital, the left always grew with a lot of money. It was silver placed by the SIDE so that I would not win the Capital, “denounced the former national legislator.

“Did you understand that SIDE can finance left or right to get the votes of the opposition? What’s more, they made me a fraud, “Lilita shot.

As if more clarity were necessary, he reiterated: “Be careful because there is growth, paid by the SIDE whatever the government in power, to get votes from him to the only alternative, which is Together for Change. “

In dispute with those vigorous movements, she distributed reproaches in all directions, while Fernando Sánchez and Paula Oliveto, who accompany Vidal on her list, watched her; and Cecilia Ferrero, Claudio Cingolani and Hernán Reyes, Buenos Aires legislators.

“What is the left talking about to me, If who brought Citibank to the dock is here? What are they talking about freedom, if we were the ones who asked for human rights and freedom of expression? “Said Lilita.

“At that time there was no politician of any ideology, neither left nor right nor the fallopian tubes (sic) to speak of corruption. The fight must be given when the other is strong, “he added.

Then it came to him the turn to an ascending group.

“Now they appear libertarians, this, the other. But guys, this worn out body is here. They are not going to run me to the left or to the right!“, he remarked between applause.

Message to “the Argentine grandchildren”

The euphoria, anger and ironies passed. The show went on. But, without losing strength, there was also a moment for Carrió to give a warm message to young people.

“I already I have a son outside the country. The other day, the most believer told me: ‘Mom, I want to go to Spain, you have to become Spanish citizenship’. And I replied: ‘Under no circumstances’ “, aired, an accomplice with the audience.

He continued with his story, with contrasting borders: “I tell him: ‘In December God comes!‘. Don’t you realize that it is coming, that December is going to be something else? He tells me ‘Well, while I’m gone, I’m going for a while‘, ha ha ha. I laughed to death, but deep down it’s a tragedy let another son go. “

Regained severity for an instant. “When they say ‘Oh, I’m not going to vote.’ Look, 16-year-old little penny, did you know? You still haven’t gone through what we went through, seeing a decadent Argentina for 60 years. Vote for us and then do what you want. We are going to rebuild the nation so that later they will want to return, “he said.

In the end, he returned to complicity to reach the youth vote.

“I ask all the grandchildren that they vote en masse Together for Change, there we are, the parents who want to build a nation for them so that they have a future here, “he asked.

And she was applauded again by an audience that acted as a fan. It was logical: it was a show.

“Bolsonaro’s response is not to the CPI, but to the Brazilian people”, says Randolfe