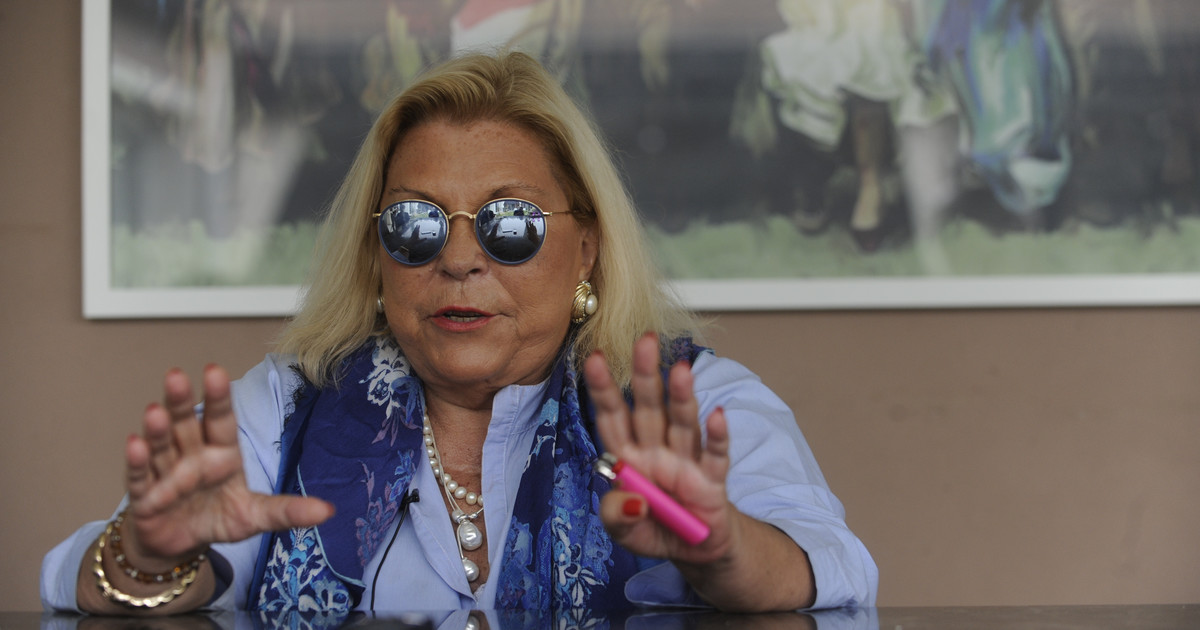 Elisa Carrió published a strong warning this Sunday on social networks about the next movements of the national government, in the middle of the second wave of the coronavirus. The reference of the Civic Coalition assured that Alberto Fernández prepares a “trap” for governors and that there is pressure on the Supreme Court, which must define the protection of the City against the suspension of classes.

“What could come. Advisory council with all governors, to trap them“, predicted Carrió, at the beginning of a message written on Twitter.

“There are pressure on the court and a wink from Lorenzetti. I got tired of saying it in private and I must make it public, “added the former national deputy.

Elisa Carrió’s warning: she said that the Government is preparing an “advisory council” with governors, “to ensnare them.”

He thus pointed to Ricardo Lorenzetti, a member of the highest court and historically favorite target of one of the founders of Juntos por el Cambio, awaiting the ruling of that body on the amparo presented by Horacio Rodríguez Larreta.

“No anticipation strategy it becomes very difficult to act on time“, launched the former legislator, in a cryptic message to his colleagues in the opposition.

Carrió expressed himself on social networks days after Alberto Fernández hardened the restrictions in the AMBA before the rise in Covid cases, with measures that aroused the rejection of provincial and municipal authorities.

Rodríguez Larreta – who later held a meeting with the President – presented an amparo before the Supreme Court of Justice to declare the unconstitutionality of the suspension of face-to-face classes between Monday and Friday 30.

Thus, Carrió’s gaze rests on Lorenzetti, who, according to Carrió, would have “winked” at the national government.

The former deputy always maintained criticism against Lorenzetti, which lasted during the government of Mauricio Macri, to the point of promoting then a request for impeachment against him, which did not prosper.

Now the highest court has no deadline to issue, even before the pronouncement of the Attorney General of the Nation.

Pending his decision, non-governmental organizations made court presentations to the same effect. One of them received a favorable opinion this Sunday.

For its part, the Buenos Aires Public Prosecutor’s Office decided in favor of the request of the NGO Open the Schools and the Center for Public Policy Studies, which had requested the nullity of the DNU signed by the President and the entire national Cabinet.

The prosecutor before the City Court of Appeals, Karina Cicero, considered that it was due make room for precautionary and guarantee the schools open this Monday.

March in the City against the suspension of face-to-face classes. Photo Juano Tesone

He explained that delays in dealing with the issue would represent “serious consequences” for students.

He also said that there would be an “affectation […] academic, social, relational and maturational with a special look at the most disadvantaged sectors where the school fulfills a function of social containment “.

Now Room IV of the Appeals Chamber must rule.

Opposition of mayors and governors

Horacio Rodríguez Larreta was not the only one to express his disagreement with the restrictions included in DNU 241/2021. Also suburban mayors and provincial governors demonstrated against the measures.

Jorge Macri, mayor of Vicente López, presented a Amparo in the Justice of San Martín so that the schools remain open, despite the decree that suspends face-to-face classes at the AMBA between this Monday and Friday the 30th.

Horacio Rodríguez Larreta filed an amparo before the Court to guarantee face-to-face classes in the City. Photo Luciano Thieberger

In the same vein, Gustavo Posse (San Isidro) and Jaime Méndez (San Miguel) declared education as “essential public service”, with the aim of circumventing the restriction imposed by Alberto Fernández.

Although the new restrictions only apply to the AMBA, the provincial leaders came forward to a possible extension of those measures.

Faced with the presidential suggestion that they implement similar restrictions in their provinces, the governors of Santa Fe and Córdoba quickly ratified that they will continue with the measures that are in force today in those territories.

Meanwhile, Rodolfo Suárez from Mendoza claimed that there is “a national leadership”: “Not each jurisdiction can do what it wants when the situation is of this gravity.”

After a Cabinet meeting, the Government he also turned his back on him to the decree. “It was decided not to adhere to the Decree of Necessity and Urgency (DNU) established by the national government,” he reported last Thursday.

Carrió’s theory suggests that the Government would convene a “advisory council” of governors to “ensnare” them, in his opinion, forcing them to support of the restrictive measures of Alberto Fernández.

Amnesty International: Navalnyj is said to be a prisoner of conscience after all