Elections in Madrid: 40-minute lines and bullrings enabled to vote 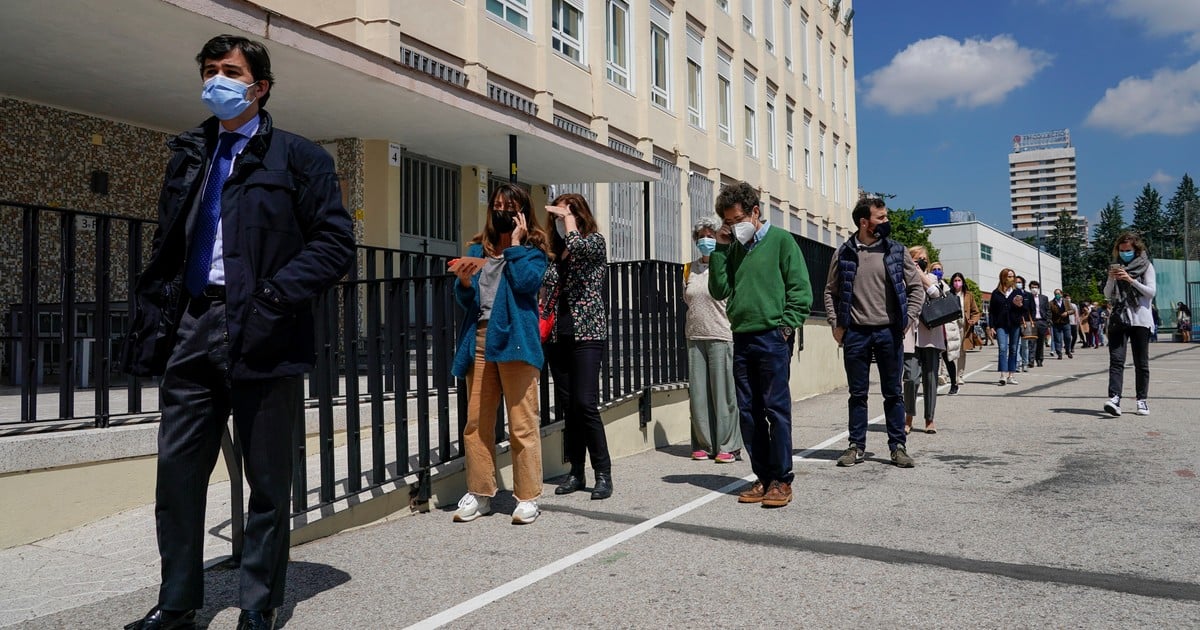 On an atypical Tuesday, from 9 in the morning Madrilenians line up to vote in these early elections that will have Collateral damage on the national political board.

With a delay of between 20 and 40 minutes in the queue due to the security measures implied by the Covid protocol to vote, some 5.2 million residents in Madrid are entitled to elect the next regional president in 1,100 polling stations that will be open until 12:00 p.m. Eight o’clock at night.

Are the fourth elections autonomy that Spain is going through in times of pandemic – after Galicia, the Basque Country and Catalonia – and the first elections since the vaccination campaign began, at the end of February.

So far, some five million Spaniards have already received the two punctures to achieve immunization against Covid-19.

Voting is not mandatory

Although voting is not compulsory in Spain, the legislation contemplates paid leave between two and four hours, depending on the work schedule, so that people do not stop casting their vote.

The Community of Madrid developed an app so that voters follow, in real time, the influx to the polling stations and thus choose the best time to go to vote.

Part of the pandemic security protocol is to recommend to the population time slots to approach the ballot box. Photo: Reuters

Part of the pandemic security protocol is to recommend to the population time zones to go to the polls: those over 65 are advised to do so until midday. And from 19 to 20, patients infected by Covid-19 and those who are serving isolation.

At one in the afternoon, 28 percent of Madrilenians had already voted, a figure that reflects an increase in two points in citizen participation in these elections.

More than 200,000 people from Madrid, however, preferred vote by mail, a figure that represents 47 percent more residents who did it in this way in the last regional elections, those of 2019.

The pandemic led to the setting up of unthinkable spaces such as bullrings or Basketball courts.

In Las Rozas, a municipality 20 kilometers from Madrid where some 67,000 people vote, a school set up the voting tables inside its gym. And in Moralzarzal, the neighbors lined up around the bullring to enter to leave their vote in the ballot box.

The pandemic led to the setting up of unexpected spaces such as bullrings or basketball courts as electoral colleges. Photo: Reuters

“Today we choose the model of Community and of the country that we want from tomorrow and I only wish it to be in coexistence,” he said at the exit of the Chamberí neighborhood school, in the capital, where the current president of Madrid had to vote, Isabel Díaz Ayuso, who goes for his re-election.

After a thick and polarized campaign, where there were no shortage of bulletproof envelopes addressed to candidates, officials even to a former president of Spain, Díaz Ayuso, candidate of the Popular Party, leads the polls to reoccupy the Royal Palace of Correos de la Puerta del Sol, seat of the regional government of Madrid.

The big question is to see if he will be able to add votes to exceed the 69 necessary seats in the local Parliament that would grant him an absolute majority, the key to govern alone and without the need to ally with any other party.

The vote of the current Madrid president, Isabel Díaz Ayuso, who is going for her re-election. Photo: AFP

If this is not achieved, it is uneasy to reveal whether the elected PP will agree with the Vox far right, or not.

His candidate, Rocío Monasterio, was the object of a frost when he approached the school of San Agustín, where he had to vote.

With the naked torso and writing, registered trademark of the feminist activists Femen, a group of women waited for her shouting “It is fascism, it is not patriotism!”.

“There are some who believe they are defenders of women’s rights and they are anything but that,” was the response of Monasterio upon leaving his electoral college.

Rocío Monasterio, from Vox, was the subject of a frost when she approached the school of San Agustín, where she had to vote. Photo: AP

In the ideological antipodes of Vox, the leader and candidate of Podemos, Pablo Iglesias -who left the vice-presidency of Spain to run for the presidency of Madrid-, said: “These elections they are much more than a regional elections. We are risking stopping the feet of lies, of hatred, of the extreme right that wants to paralyze our institutions ”.

“Today can be a historic day. We can turn the applause into votes ”, were the words of the candidate Mónica García, the one chosen by the Más Madrid party for these elections.

Más Madrid, the formation that arose when it separated from Unidos Podemos, is emerging as a force that will achieve a good regional choice.

After standing in line for 45 minutes at an electoral college in the Ciudad Lineal district, the PSOE candidate, Angel Gabilondo, stressed that “every vote counts.”

“I will try not to lose”, Gabilondo ironized, who aspires to mobilize the poorest neighborhoods in the south of the Community of Madrid to vote for the left.

His intention is to join forces with the populism of Pablo Iglesias – whom he initially rejected as an ally – and with Más Madrid, the formation that emerged when they separated from United We Can, and that is emerging as a force that will achieve a good regional election.

“It is important that everyone participates,” said Edmundo Bal, Ciudadanos candidate, after leaving his electoral college.

It alluded to the great ghost of abstention in an election held on a Tuesday. His party, the liberal force that is dying in almost all of Spain, is gambling its entrance to the Parliament of Madrid.