Elections in Chile 2021, live and direct

Chile elects a new president this Sunday. Seven candidates from across the ideological arc will contest the succession of Sebastián Piñera. The polls anticipate that neither will reach half plus one of the votes and there will be a second round on December 19 between the two candidates with the most votes today. The favorites are the leader of the extreme right, José Antonio Kast, and the leftist Gabriel Boric. It is not ruled out, however, that there may be a last-minute surprise and the right-wing Sebastián Sichel or the Christian Democrat Yasna Provoste achieve their pass.

In addition to being president, Chileans will elect a new Chamber of Deputies and part of the Senate.

The day started calmly and with long lines, due to the cumbersome voting system. Voting in Chile is not mandatory and participation is usually low, around 50%. The political climate is, however, agitated. These elections will define a new course for Chile after the revolts of 2019, whose echoes still endure. 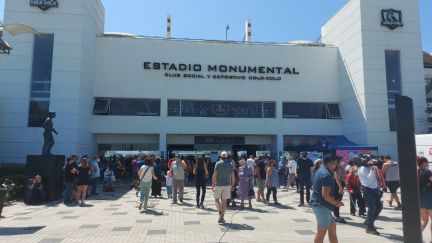 This is how the entrance to the Colo Colo Monumental stadium looked like this morning, converted into a huge voting center for 20,000 people.

The movement in the capital is intense. Chileans stand in long lines to vote under the scorching sun in Santiago. The delays, however, are not evidence that participation is going up, which is always around 50% percent.

It happens that the process is cumbersome for the citizen, who must mark his vote on four cards, the largest of which is 40 cm by 40 cm. Once the options for president, senators, deputies and regional councilors have been marked, the voter must fold the cards on themselves, with successive folds, and insert them in each of the four ballot boxes at the voting table. The process takes several minutes.

Leftist Gabriel Boric also voted in the morning, but in Punta Arenas, a small town at the southernmost tip of Chile.

“The call I make is that I am going to be the President of all Chileans. And in Chile, beyond the political differences that are expressed in the campaign, we have many things in common. And that the objectives that we have proposed to deliver a pension system that is worthy, of people who worked all their lives and who today have misery pensions, are issues that we have to change. “, Said the candidate with a campaign tone, despite the electoral ban.

Boric promised a Chile in which “there is no health for the rich and health for the poor” “I hope to be able to lead those agreements, with conversation, with dialogue, with whatever is necessary, but moving forward. out there, you have to advance step by step, but never stop moving forward. ”He later uploaded a photo with a message to social networks.

José Antonio Kast voted early in the morning at table 84 of the Colegio Ana Mogas de Paine, in Santiago. Minutes later, the far-right candidate uploaded a message recorded on his social networks, a tool that was key during his campaign.

“I want to thank everyone who has followed us on social networks. Today is a crucial election for the future of Chile,” said Kast, and called on voters to leave their homes to vote.

Total seven candidates seek their pass to La Moneda this Sunday. In addition to Boric and Kast, there are at least two that today could give a surprise.

Sebastian Sichel he is an independent who ranks third in the polls. It represents the more traditional right-wing option, which denies Kast’s extreme and populist style (more associated with, for example, Jair Bolsonaro in Brasl). Sichel is the candidate who represents the option of President Sebastián Piñera.

Yasna Provoste She is a senator for the Cristina Democracy and represents the moderate left. His inheritance is that of Concertación, as the alliance with the Socialist Party that led the democratic transition for 20 years was called. Provoste, like Sichel, has paid the cost of the flight of votes to the extremes, which has emptied the options of the center.

Surveys anticipate that no candidate will reach the 50% required to win in the first round. If so, there will be a playoff on December 19. The two favorites are at the extremes of the political spectrum.

Jose Antonio Kast he is the candidate of the extreme right. He has the support of those who want to restore the order lost after the social outbreak of October 2019. His vote is transversal: very broad in the wealthy classes that traditionally vote for the right, but also among immigrants and the middle class that has been seen affected by the excesses. Kast promises a strong hand against crime and immigration and maintains a very conservative social agenda, against abortion and equal marriage. He has not denied Pinochetism.

Can read this profile of Kast written by Rocío Montes

Gabriel boric is the second favorite of the day. Emerged from the student protests of 2011, he is 35 years old. If he wins, he will be the youngest president in the history of Chile. Boric represents the Chilean left, in alliance with the Communist Party. His agenda coincides with the demands of the riots: more social benefits, public health and free education and a reform of the pension system, now in private hands. His vote is solid among the youngest, in the popular neighborhoods and in those who have always proclaimed themselves opponents of the Pinochet dictatorship.

You can read here a profile of Gabriel Boric

Welcome to the live coverage of the elections in Chile.

We will accompany you from Santiago de Chile throughout the election day. The day has started calmly, far from the political tension of the previous days. Most of the seven candidates to succeed President Sebastián Piñera in La Moneda have already voted.

The election is the most momentous since the return to democracy in Chile in 1990. The winner will have to manage the political crisis that began with the riots of 2019. Voters have been divided between those who want the continuity of the Chilean model and those who want a profound change of course.

Genoa, the Limes Festival closes with 4 thousand admissions to the Ducale

Mara Venier, accident on Sunday IN: how are you – Curler

Historian appreciated the renaming of the Great Patriotic War in Ukraine