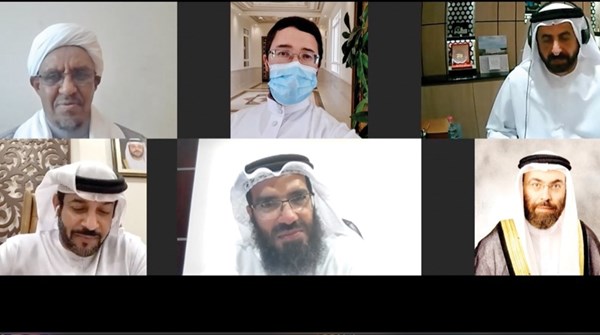 Dr. Abdul-Rahman Salman Al-Hammadi, Director of Zakat Resources and Media at the Zakat Fund, was elected Chairman of the Advisory Board of the Holy Quran College at Al-Qasimia University.
The Council emphasized the importance of its role in achieving the foundations of its establishment, in supporting and enhancing the college’s march, working to upgrade it, and continuing the stages of development in the educational and academic process.
He praised the great support and constant attention paid by His Highness Sheikh Dr. Sultan bin Muhammad Al Qasimi, Supreme Council Member and Ruler of Sharjah, President of Al Qasimia University, for supporting the university and enabling it to develop in its various fields and academic advancement.
This came during the remote meeting held yesterday evening, on the occasion of its formation under the chairmanship of Dr. Awad Al-Khalaf, Acting Director of Al-Qasimia University.
The convening of the advisory council is part of Al Qasimia University’s keenness to attract community members that work to enhance its goals in developing the relationship with the external community, and strengthening the Holy Quran College’s communication with its partners.
The meeting was attended by Dr. Abdul Karim Othman, Dean of the College and members of the College’s Advisory Board, which consisted of: Sultan Mattar bin Dalmouk, Chairman of the Board of Directors of the Sharjah Foundation for the Holy Quran and Sunnah, Dr. Abdullah Salem bin Hammouda Al Ketbi, Director of the Academic Department at the Sharjah Heritage Institute, and Dr. Abdul Rahman Salman Al Hammadi, Director of the Department of Zakat and Media Resources. Zakat Fund, and Khalifa Hassan, director of the Holy Quran Radio in Sharjah.
The council listened to a detailed report from the dean of the college, in which he reviewed the college’s march and its future plan, and then discussion and discussion took place on the advisory council’s role in supporting and enhancing the college’s march and working to advance it and continue development stages in the educational and academic process, and work to support the university’s visions and policies.