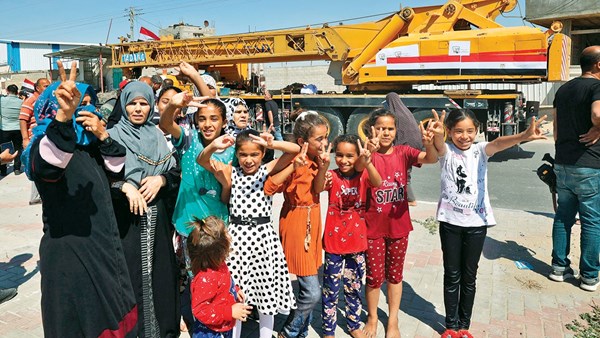 Yesterday, Egypt sent a convoy of technical staff and engineering equipment to remove the rubble left by the Israeli bombing of the Gaza Strip, during the recent war between Israel and the “Hamas” movement, and to prepare for reconstruction operations, according to an official statement.
The statement stated that “on the instructions of President Abdel-Fattah El-Sisi, Egyptian engineering equipment and technical staff crossed the Rafah border into the Gaza Strip, to contribute to removing the rubble, the rubble of demolished houses and towers, in the context of relieving the citizens of the Strip and quickly returning life to normal.”
The statement added, “This convoy will work to prepare the ground for the start of the reconstruction process.”
Local TV channels broadcast pictures of trucks and bulldozers crossing from the Egyptian side of the Rafah crossing into the Gaza Strip.
On the 20th of May, the Egyptian President announced the allocation of 500 million dollars as assistance in the reconstruction of Gaza, provided that Egyptian companies participate in these works.
Egypt also sent, through the Rafah crossing, food aid to Gaza, and received wounded people from the Strip for treatment in Egyptian hospitals.
From May 10 to 21, 254 Palestinians were killed in the Israeli bombing of the Gaza Strip, including 66 children and fighters, according to the local authorities. In Israel, rockets fired from the Strip killed 12 people, including a child, a girl and a soldier, police said.
Palestinians lined up on the border from the Gaza Strip at the Rafah crossing, to receive the convoy as it entered the Strip. A Palestinian border official said: 50 trucks crossed.
Mahmoud Ismail, an Egyptian truck driver in Gaza, said: “We paid with all our money and equipment to participate with the Palestinians in the reconstruction of Gaza. Every Egyptian wishes to participate in the reconstruction of Gaza.”
Egypt played a major role in mediating a truce between the two sides.
The Ministry of Housing in Gaza stated that 1,500 housing units were destroyed during the fighting, in addition to 1,500 other units sustained irreparable damage, while 17,000 units were partially damaged.
A ministry official said the cost of rebuilding was $150 million.
This comes as the commander of the Southern Command in the Israeli army, Major General Eliezer Toledano, warned of renewed escalation in the Gaza Strip, saying: “The conflict of the past month is only the first step of a more important campaign.”
He added: “The process is over, or at least its first step, and the next step will take place if we see that the security situation is changing.”
In addition, 22 Palestinians were wounded yesterday, after the Israeli army dispersed marches condemning the settlements in the West Bank.
Violent confrontations erupted near Jabal Sabih in the town of Beita, south of Nablus. The Palestinian Red Crescent Society stated that its crews dealt with 20 injuries during the confrontations in the town of Beita, south of Nablus.
She explained that among the 15 wounded with live bullets, five of them were taken to hospital for treatment, one of whom had serious injuries to the neck, three were hit by rubber bullets, and two were bruised by beatings from the soldiers.