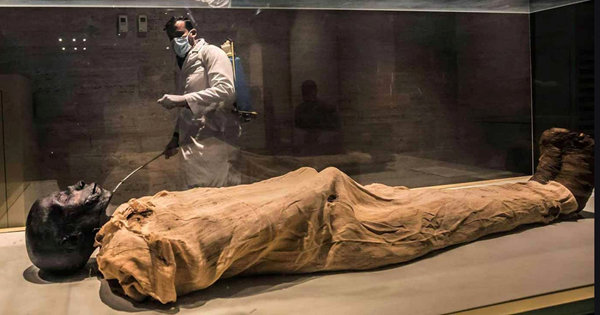 He pointed out that the opening of the doors of the Mummies Hall at the Museum of Egyptian Civilization in Fustat comes as part of Egypt’s celebrations of World Heritage Day, which falls on the 18th of April every year. They weighed 50 tons.

He pointed out that this comes after the scattered stones of the statues were collected, restored and re-installed on the western façade of the Luxor Temple, and the curtain was raised on a historical painting that narrates the glories and victories of King Amenhotep II in the temples of Karnak.

He pointed to the announcement of the new archaeological discovery that an Egyptian archaeological mission headed by Dr. Zahi Hawass, former Egyptian Minister of Antiquities, which included finding the lost golden city in the sands of the ancient Theban Cemetery, west of Luxor, which is rich in hundreds of tombs and dozens of temples, built by the kings, queens and nobles of Egypt Ancient more than 3,500 years ago.
Waziri added that a team of restorers at the National Museum of Egyptian Civilization in Fustat completed the maintenance and preparation of the 22 mummies of ancient Egypt’s kings and queens, and placed them in the two display vaults designated for them inside the Mummies Hall in
The museum is a preparation for receiving its visitors, besides installing the royal coffins in the place designated for displaying them.
He pointed out that (Vtarin) the exhibition areas are equipped with nitrogen to maintain the temperature and humidity inside, which provides the necessary protection for the mummies, and ensures that they are not affected by any external climatic factors.