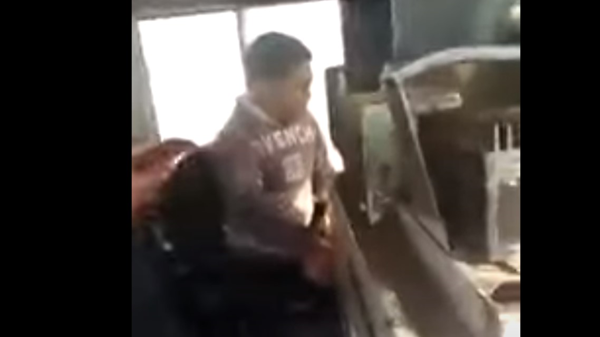 The Egyptian Ministry of Interior revealed the circumstances of the circulation of a video clip, which caused a sensation among the pioneers of social networking sites, the meeting during the last hours, during which a child appeared sitting on the driver’s seat inside the cabin of a train in Kafr El-Sheikh.
The Ministry of Interior said in a statement today morning, Wednesday: “As part of the Ministry of Interior’s efforts to uncover the circumstances of what was circulated on a Facebook page regarding a video clip in which a child appears sitting in the driver’s seat inside the driving cabin of a train with a person next to him. Another filmed him, shouting that the train would stop, and a state of panic appeared inside the cabin, ”according to Al-Masry Al-Youm newspaper.

Read also .. The truth about the “School Girl” video in Maadi!

She added, “It was found by examination that the aforementioned video clip was old and filmed in 2018 inside the train heading from Kafr El-Sheikh station to Qaleen station, and the investigations concluded that two people were present inside the train’s cabins, after the procedures were legalized, and they were arrested and confronted with them, they decided that they were inside The spare back tractor cabin (not used) and that they filmed this video as a joke and that the one who posted this video is a friend of them, and he was seized and decided that he had put the video on the WhatsApp application and that he was surprised by publishing it on social networking sites Facebook ».

Coronavirus: for the first time, Jorge Ferraresi spoke about Purita Díaz, the recipient of the VIP vaccination