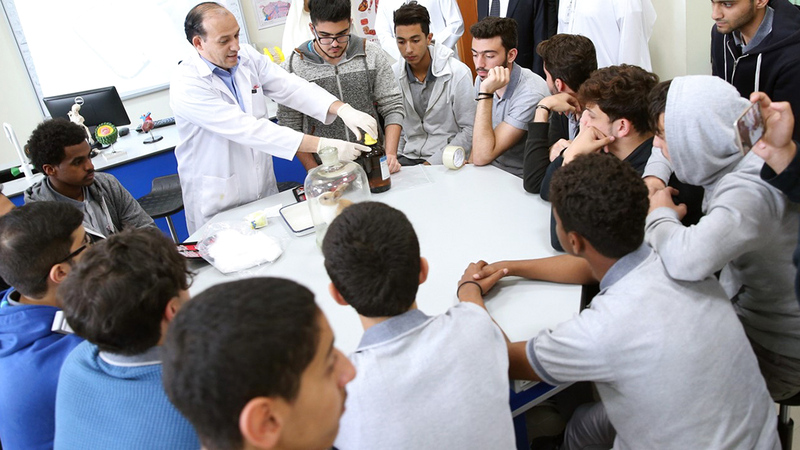 The Department of Education and Knowledge in Abu Dhabi has identified two main conditions for equivalency of private school graduates (foreign curricula) with their certificates to enroll in one of the state’s universities, noting that if students study other than the Ministry of Education’s curriculum, and wish to apply for admission to a university in the country, they will need an equivalency certificate issued by the Ministry. , stating that the student has an educational level equivalent to high school in the country.

The department explained that obtaining the equivalency certificate requires passing the Arabic language exam, which is set by the ministry for the 12th grade for native speakers, or the Arabic language exam for non-native speakers, and Muslim students passing the Islamic studies exam (for Arabic speakers and non-Arabic speakers), stressing the need to follow up Any additional requirements for equalizing each curriculum on a regular basis.

The department indicated that private schools in the Emirate of Abu Dhabi provide 14 curricula, and the student can be transferred from one private school to another, or from one curricula to another, bearing in mind that the deadline for changing schools is mid-October of each academic year, and the department recommended not to transfer Students switch from one curriculum to another after starting the ninth grade or its equivalent, to avoid disrupting his academic career, or affecting his performance in the pre-university school years, calling on the students’ families to familiarize themselves with the basic and optional subjects that the student will study in the new curriculum, before carrying out the transfer process. Between curricula, taking into account factors related to the student’s psychological and social health, and his ability to adapt to a new learning environment.

The department also called on the students’ families to take into account major considerations when choosing the educational curriculum, including future plans for higher education, the extent to which universities recognize their certificates and qualifications, the equivalence and recognition of certificates in their home country if they are residents of the country, and the student’s academic history, taking into account the ease of change between curricula. school, in case a decision is made to change the type of school.

She pointed out that there are compulsory subjects that the student should study in addition to the subjects prescribed in the school curriculum, which includes Islamic education, and it is mandatory for all Muslim students in private schools of different nationalities, and it is also an optional subject for non-Muslim students, while the subject of social studies is mandatory for all students in The first to the ninth grades, and the language of instruction is left to the school’s decision, while all schools are committed to teaching moral education to all students in the first to 12th grades, pointing out that the Arabic language is mandatory for all students, and is considered a first language for native students. An additional language for non-native students is compulsory until the ninth grade, and it becomes an optional subject for those in the tenth grade until the 12th grade.

• “Education and Knowledge” recommended not transferring the student from one curriculum to another after the ninth grade, to avoid disrupting his academic career.

• 14 accredited curricula in the Emirate of Abu Dhabi.