Eduardo Domínguez, the father of the champion Colón who lets his players speak for him 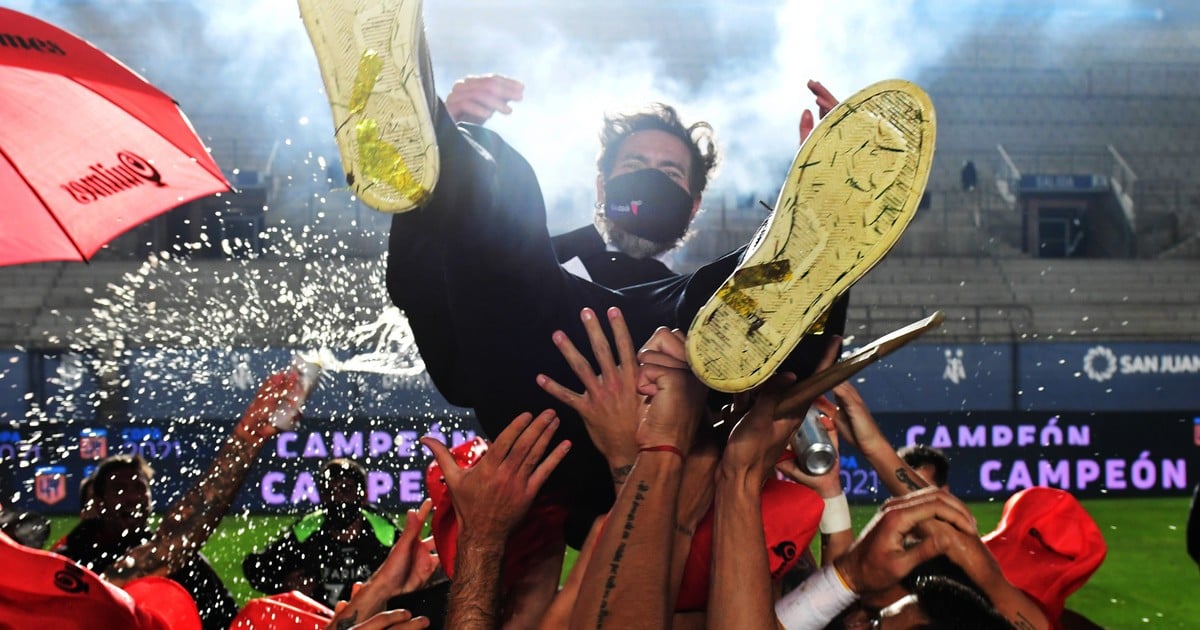 Eduardo Domínguez chose silence on the night of greatest glory in the history of Columbus. He preferred to run to the side with his tears moistening his bushy beard and leave the focus to the crazy celebration of the campus. He spoke with his team, which perfectly reflected his soccer idea on each field of play during the Professional League Cup that was awarded this Friday night in San Juan after thrashing Racing 3-0. And those who spoke for – and – from him were his managers, who expressed all their respect, recognition and admiration for this 42-year-old coach who became a hero of the Sabalera history by putting his signature on the champion’s game.

“The idea of ​​the game is achieved by convincing the player and that’s what Eduardo did since he arrived. He convinced us of an idea and several principles that for him were non-negotiable for what he wanted from the team. He always believed in us even more than we believed ourselves. He gave us confidence and told us that we had to learn to live with the error, that we had to try to play beyond making mistakes. And that was one of our strengths, “he revealed Federico Lértora.

It is perhaps the greatest virtue of this Columbus with a crown: he became greater than the traditional greats of Argentine football from the courage to play football without the handcuffs of fear of losing. He never negotiated his proposal to bring his best middle legs together to work out and attack, despite significant casualties and despite some decline in performance over a period of competition.

Clenched fists and moistened eyes, Domínguez unloaded in the end of his 3-0 of his Colón to Racing in San Juan. Photo: Marcelo Carroll, special envoy

Domínguez chose not to speak at the Bicentennial Stadium though he couldn’t save himself from being picked up by his boys and fluttered through the air in the middle of the revelry. He did not speak, but he embraced for a long time with each of the footballers, always with the mask on correctly despite the logical lack of control of the celebrations.

Quiet, with his particular low-profile style (he does not use WhatsApp or watch sports programs), he allowed himself only one privilege: take the trophy home with you to share it with your loved ones one night. And that’s how at 3 in the morning he arrived at his home in Santa Fe after the delegation’s flight and was surprised by a group of fans who were waiting for him to congratulate him and ask for a photo that they will keep forever.

Domínguez, who had already won the Uruguayan Super Cup with Nacional in 2019 (he beat Peñarol), grabbed a Colón in 2020 saddened by the final lost in the South American a year earlier. Since that loss to Independiente del Valle, everything was more black than red in the Sabalero. Until Domínguez, Carlos Bianchi’s son-in-law, arrived and turned on the inherited cell phone …

Praised and respected by his leaders, Domínguez gave his stamp to the champion Columbus. Photo: Marcelo Carroll

But there was not much divine help; Domínguez’s was earthly work. He leaned on the symbol, Luis Miguel Rodríguez (the scorer with 8 shouts along with Santos Borré), and he strengthened him surrounded by good footing. It solidified at the bottom and was able to camouflage itself in different schemes without altering the product. And for that, the key was in the clarity to convey to the player what he wanted from each one.

Rafael Delgado You can attest that he went from full back to lane and finished as second center back: “Eduardo told me since he arrived that I gave him many things in that position, which I did not know. I was learning from his hand. He is an excellent coach, very calm. Always think about the welfare of the group regardless of what happens. “

Alexis Castro, who was not taken into account in San Lorenzo, also: “Talking about Eduardo excites me because he is a person who trusted me a lot when nobody did. He called me, opened the doors and gave me the confidence that every player needs. I am grateful to him and his coaching staff. He is a barbarian DT, he transmits a lot of tranquility and is very clear with his idea. We have respected him and his idea a lot and that led us to the title “.

“Your Colon is smartHe always tries to attack, but when he is outmatched, he knows how to retreat well. Hopefully after this many more titles will come “, wished him his friend Paolo Goltz. Y Rodrigo Aliendro summed up the feeling of the entire campus: “Since Eduardo came we have worked very wellWe grew a lot as a team and this is the prize. From the beginning we were very convinced of the idea. “

Between both cycles, Domínguez directed 95 games to Colón (100 if you count the five from the Santa Fe Cup) and obtained 54 percent effectiveness. In this League Cup he garnered 25 points, with 7 wins, 4 draws and just two losses. With 23 goals in favor (only River scored more in his area, with 25) and 10 against (the least defeated, along with Estudiantes). In the playoffs, he beat Talleres on penalties, the only one who converted him in this instance. Then they beat Independiente 2-0 and Racing 3-0.

And now? His contract expires at the end of June and before driving to Buenos Aires he will sit down to chat with the president Jose Vignatti, who already anticipated that he will offer to stay. Whatever your decision, no one can take away Eduardo Dominguez the place he deserves on this golden page of the club: that of being the father of the first title in the life of Columbus.