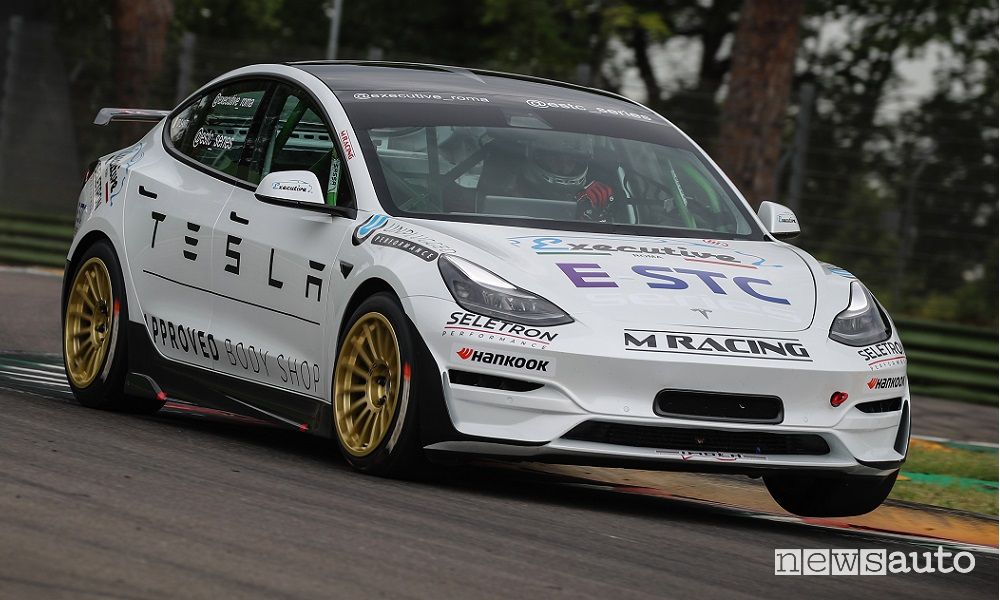 To Imola the new championship debuted on the weekend of 18 July E-STC Series, the first competition in the world with electric car races reserved for cars Super Turismo electric derived from the series.

The performance of Imola, prologue to the actual season, saw the performers as protagonists on the track Tesla Model 3 developed by the American tuner Unplugged Performance, with the presence of some of the teams that have participated in the official championship since September.

E-STC Series is a Super Turismo electric racing car championship. Pending the accession of other car manufacturers, the protagonists compete on board the Tesla Model 3 electric racing car, which in Imola showed good performances, with times under the 2 ‘wall on the single lap.

The championship E-STC Series it is a pioneering challenge strongly desired by the organizer Luca Panizzi (FX Italian Series) with the full support of ACI Sport is ASI, carried out thanks also to the fundamental technical partnerships developed with Hankook, OMP, Seletron Performance is Executive Rome.

Teams and drivers at the start of the E-STC Series

The event saw the presence on the track of the V-Action Team, who lined up the expert in the two exhibition heats Luigi Ferrara and the young ‘rookie’ Matteo Filippi: the stable managed by Daniele Verruccio has launched into the new electric challenge after numerous successes in various categories in the Italian championships.

The Roman team also raced in Imola Best Lap with the fast Max Mugelli. Among the realities present at the start also the newborn girl Lonati Caffi Racing Department, resulting from the new challenge carried out by the founders Alex Caffi (former Formula 1 driver) e Riccardo Lonati, which has lined up at the starting line an electric racing “specialist” such as Roberto Agostini.

The team is also present in style Executive Rome, official partner of the series as well as one of the first centers of the Tesla network in Italy, at the start of the championship with the youngster Danny.

A particularly captivating livery instead distinguished the presence of the team Zero methane by Lema Racing, present thanks to the commitment promoted by the Bolognese entrepreneur Giacomo ‘Jack’ Ghermandi and by the technicians of the Slovenian team.

After the day dedicated to free practicere, necessary to optimize the tuning of the cars, the exhibition (broadcast live on the MS Channel and on the social channels of the championship) saw the performance of a first simulation on the race distance, after which on two shifts aimed at recreating the dry ride which will then be repeated in the Superpole.

The cars, during the weekend, did not reveal any particular technical problem, highlighting an excellent level of reliability, with the riders who managed to progressively lower their lap times.

“It was a fantastic weekend, for which I would like to thank the Imola racetrack and Gian Carlo Minardi first of all, as well as of course ACI Sport and ASI for their precious support. – the words of Luca Panizzi (organizer E-STC Series) – it was very important for us to give a tangible signal about the fact that E-STC Series is finally a concrete reality and ready for… take-off, after the great preparatory work carried out in recent months.

I believe that what has just ended can only be the first step on a path that will lead us to offer a truly innovative product in the Italian motorsport panorama. A big round of applause goes to all the teams and riders who believed in this project right from the start, waiting to be able to welcome prestigious new entries from Varano that will contribute to enriching the championship.

Thanks also go to our technical partners, aware that the road ahead will be difficult but at the same time full of satisfactions! We give everyone an appointment at the Varano weekend, where the season will officially start as part of our FX Racing Weekend ”.

While Steinmeier talks about flood victims, Laschet laughs in the background – now he speaks up