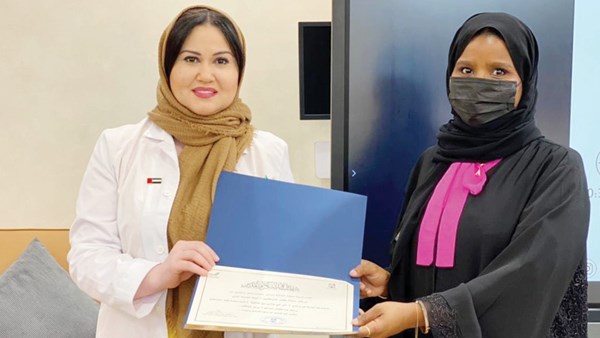 The Women’s Renaissance Society in Dubai – Social Health Center, organized an entertainment program entitled “To my father and mother with greetings”, on the occasion of International Parents Day, based on its role in community awareness and spreading the inherent culture, in cooperation with the Emirates Association for Retirees, in the presence of retired Colonel Faraj Ismail – Chairman of the Board Management of the Emirates Retirees Association, and Dr. Salwa Al Suwaidi – Consultant of Geriatric Medicine – Director of the Senior Citizens Happiness Center. The event was held at the Senior Citizens Happiness Center of the Dubai Health Authority, in the presence of 18 senior citizens, with the application of precautionary measures and safety instructions.
The program aimed to enhance the spirit of communication between the elderly and their children and members of society, and to bring happiness to their hearts. The meeting addressed the commandments of the importance of children’s communication with their parents and the concept of righteousness and ways of benevolence towards them. The UAE society is distinguished by its adherence to the attributes of the true religion, and the family and its interdependence are the focus of our wise leadership’s attention. Dr. Fatima Al Falasi, Director General of the Dubai Women’s Renaissance Society, explained that the association is keen, through the establishment of this program, to emphasize the great position of parents in the Islamic religion and our social culture, and in appreciation of their great role in creating generations that contribute to the development and development of human civilization, which is a simple recognition of the right of parents. Those who made all sacrifices and gifts for their children, and thus they deserve honor, appreciation and respect, and there is nothing higher than the high status and lofty value that God Almighty bestowed on the mother and father, as he combined his worship with their righteousness, which is an Islamic and human duty. Retired Colonel Faraj Ismail, Chairman of the Board of Directors of the Emirates Retirees Association, praised the role of community institutions in highlighting moral values ​​and instilling righteousness in the souls of young people today, by presenting our culture and the splendor of our righteous society, to deliver a meaningful message to future generations of youth, and fortify them religiously, cognitively, culturally and behaviorally. He also valued the association’s efforts in emphasizing the importance of consolidating national identity and maintaining family cohesion, through its initiatives and programs, based on social and national responsibility.