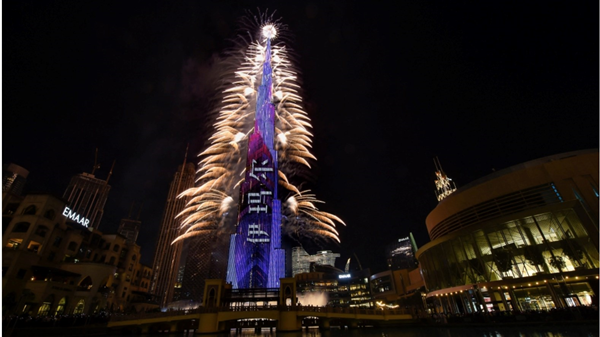 Dubai welcomed the New Year with special celebrations in many locations, which enabled the public to enjoy the most beautiful times during this happy occasion, as fireworks displays presented by Al Zarooni Group were held in the historical area of ​​“Al Seef” and “Dubai Frame” and on the beach of the destination “La Myr, Bluewaters Island, and The Beach, opposite JBR. Exceptional concerts were also organized by Lebanese singer Najwa Karam and Syrian artist Nassif Zaitoun at Festival Arena in Dubai Festival City Mall.
As part of the 27th Dubai Shopping Festival, 36 fireworks displays were presented at 29 locations across the city to celebrate the New Year, including the Burj Khalifa, in addition to the DSF Drone Light Show at Bluewaters Island and The Beach. » opposite the Jumeirah Beach Residence, in addition to more excitement and celebrations at “Expo 2020 Dubai”, which included concerts by the most prominent international DJs such as Armin Van Buren, in addition to many concerts by the most prominent international stars, including singer Robbie Williams. , and a number of international DJs, such as Grammy Award winner Roger Sanchez.

Sacramento breaks up with Mou. And Roma chooses the former Samp Foti as assistant coach

Euthanasia, “I made a revolution by standing still in bed”. The first in Italy

Cruises are authorized in Brazil from November 1st