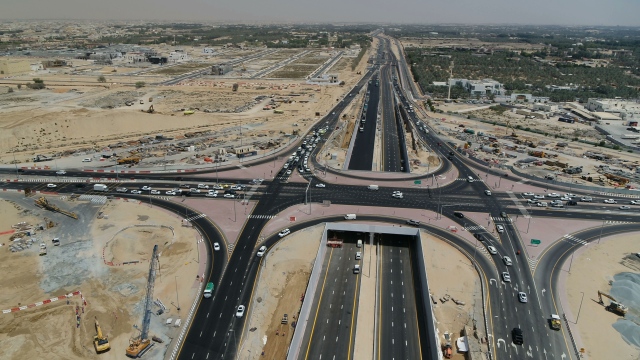 The Roads and Transport Authority (RTA) today inaugurated a project to develop the axis of Al Khawaneej Street, which consists of a tunnel with a capacity of three lanes in each direction at the intersection of Al Khawaneej Street with Sheikh Zayed bin Hamdan Al Nahyan Street and a bridge with a capacity of two lanes in each direction on the intersection of Al-Amardi Street with Emirates Road towards Al-Awir area.

The Director General and Chairman of the Board of Directors of the Roads and Transport Authority, Mattar Mohammed Al Tayer, said: “The Al Khawaneej Corridor is one of the most important strategic projects that the Authority has accomplished to strengthen the connecting axes between the emirates of Dubai and Sharjah by developing the vertical roads linking the Emirates and Sheikh Mohammed bin Zayed streets to the Road. The airport, with the aim of accommodating the current and expected growth in traffic in the coming years

Al Tayer explained that the project included the implementation of a tunnel on Al Khawaneej Street at its intersection with Sheikh Zayed bin Hamdan Al Nahyan Street, with a length of 680 meters, a capacity of three lanes in each direction, and a surface intersection controlled by light signals to secure free and safe traffic movement on Al Khawaneej Street, and the development of the existing roundabout. On the intersection of Al Khawaneej Street with Al Amardi Street to become an intersection controlled by traffic lights, and the development of the intersection between Al Amardi Street and Emirates Street, by constructing an overpass over Emirates Road towards Al Aweer area, with a length of 201 meters, and a capacity of two lanes in each direction.

He pointed out that work is underway on the implementation of a pedestrian bridge near the Arabian Center on Al Khawaneej Street, as well as the paving of about 23 kilometers of service roads along Al Khawaneej and Al Amradi Streets, and some improvements are being implemented on three intersections on Algeria Street by converting them into intersections controlled by traffic lights, in addition to Project related works such as lighting, rainwater drainage, traffic signage, road planning, and road safety protection works.

The airport street development project contributed to a great flow of traffic, reduced waiting times and solving the problem of congestion resulting from the interference of traffic between vehicles, as it comes after the opening of the Tripoli Street Corridor, which connects Sheikh Mohammed bin Zayed Street and the Emirates, with a length of about 12 km Its opening contributed to easing congestion and facilitating traffic movement, improving entrances to the districts of Al-Warqa and Mirdif along Tripoli Street, and raising the level of safety along the axis.

Dubai roads stop paperwork at all its centers