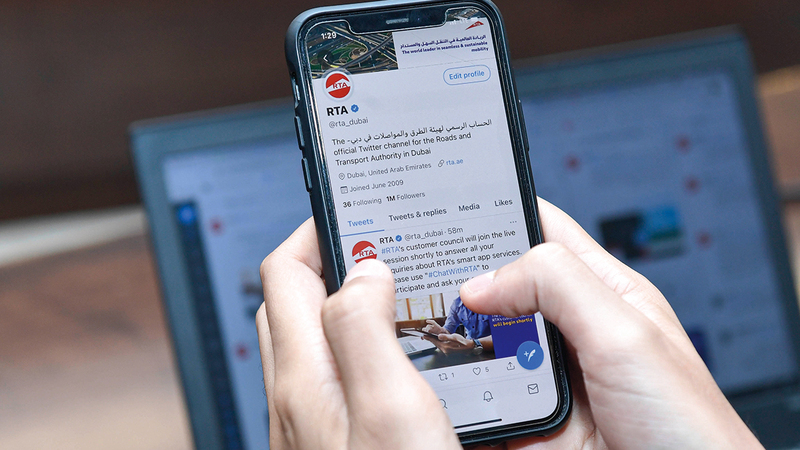 Finally, the dialogue session organized by the Dubai Roads and Transport Authority Customer Council (remotely), witnessed a great turnout and interaction by the public of different nationalities, and from the beneficiaries of the authority’s smart and electronic services package.

The meeting, which was held via “Twitter” and through the “Talk to the RTA” initiative, was chaired by a member of the Board of Directors of the Roads and Transport Authority, and Chairman of its Customers Council Muhammad Obaid Al Mulla, and was attended by specialized employees from the Smart Services Department from the institutional technical support services sector.

Member of the Board of Directors of the Roads and Transport Authority, Chairman of its Customers Council, Mohammed Obaid Al Mulla, praised the interaction and great turnout shown by the participants in the direct conversation with the RTA and their keenness to participate in developing and improving the services of the authority and supporting its initiatives, which were found mainly for the interest of the public, including residents, visitors and incoming tourists. To the emirate from all over the world.

Al Mulla said: “The authority is always keen to make all its clients and beneficiaries of its services happy, and is keen on their safety and health, especially in such exceptional circumstances that the whole world is going through. The authority spares no effort to raise their level of satisfaction and listen to their views and aspirations.”

He pointed out that the authority will continue to hold sessions of the Customers Council via Twitter based on its plans in this field, given the success of this experiment several times, and the positive and active interaction it had with the public, as most of those who attended and participated in this unique experience praised the transparency and clarity shown by them. Council with the various cases brought up during the discussions. Topics related to specific services will also be allocated to be presented and discussed through the Twitter program, as is the case in the Customers Council during its regular sessions.