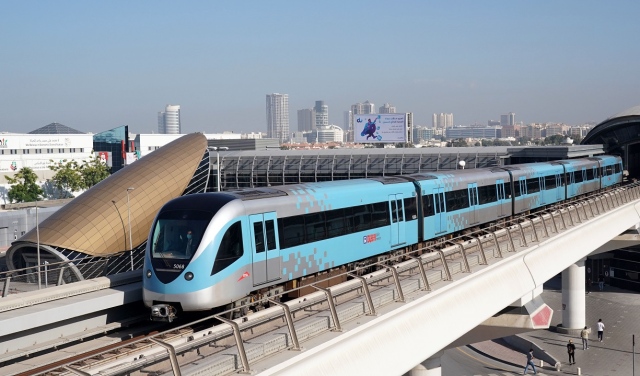 The Roads and Transport Authority announced that a French-Japanese consortium comprising three companies, Keolis Corporation, Mitsubishi Heavy Industries Engineering and Mitsubishi Corporation, has won a contract to operate and maintain the Dubai Metro, and operate the Dubai Tram for a period of 15 years (9 base years). And 6 years renewable), with a value of approximately 542 million dirhams annually, after a public tender presented by the authority, in which four consortia and international companies specialized in operating and maintaining trains participated, and after analyzing the submitted offers, the contract was awarded to the Franco-Japanese consortium, to present them with the best technical and financial offers.

The contract was signed by the Authority, Director General and Chairman of the Board of Directors of the Roads and Transport Authority, Mattar Muhammad Al Tayer, on the alliance, CEO of Ciolis Group Marie Ang Dibon, Director of Investment and Services at Mitsubishi Heavy Engineering Industries Aki Heiko Nozaka and Deputy Director General of Transportation Infrastructure Toro Kimura. And the maintenance of the Dubai Metro, and the operation of the Dubai Tram, starting from September 8, is preceded by a preparatory period in which the process of handing over the assets and systems from the current operator to the new operator, to ensure the safe operation of the Dubai Metro and Tram, upon the official receipt of the tasks.

Al Tayer said: According to the contract, the coalition will provide operation and maintenance services for the Dubai Metro with its red and green lines, as well as (Route 2020) in addition to the Dubai Tram operation services, and all assets of the metro and tram system, including trains, control centers, stations and their infrastructure, as well as Providing high-level passenger transportation services in line with the daily changing requirements in the number of passengers on the metro and tram network, and the contract also includes the operation and maintenance of the automated operating systems of the metro and the tariff systems for revenue collection, through the sale and filling of (Nol) cards in metro stations, in addition to To provide leadership, technical and administrative jobs for citizens and train them in proportion to the work environment, stressing the authority’s keenness to qualify national cadres and transfer global expertise in the field of operating and maintaining train systems, which is one of the new fields in the region.

He added: The alliance will, during the preparatory period, fully coordinate with the currently operating company, to take over the tasks, and ensure a high level of safety for network users, through continuous monitoring of the safety of the metro and tram system and working to develop it continuously, and coordination and integration between the metro, tram and other means of transport In addition to the smooth transfer of the employees working for the current operator to the new one.

Oversight of operation and maintenance

Al Tayer explained that the method of outsourcing in the operation and maintenance of metro and trains is applied in a number of metro and tram systems in various countries of the world, such as London, Singapore, Paris and Sydney metro lines.

Pride in the partnership

On her part, CEO of Kyulis Group, Mary Ange Dibon, said: “We are honored to have been chosen, along with Mitsubishi Heavy Engineering Industries and Mitsubishi Corporation, by the Roads and Transport Authority to operate and maintain the advanced driverless metro system in Dubai, and operate the Dubai Tram, which operates with a feeder system. Ground electricity on the entire line, without the need for overhead wires to supply it, confirming the pride of Kyulis in its extensive experience in managing automated metro and tram networks, and as a multimodal operator working closely with 300 public transport authorities every day to ensure safe, reliable and focused transportation solutions on passenger service, We look forward to establishing a cooperative partnership with the Roads and Transport Authority to embody its vision of (global leadership in easy and sustainable mobility).

Drake, the music king Midas against whom it is impossible to bet

Faith Sister Where does the translation “Soviet Union” come from?

The invisible ravages of the pandemic on single mothers