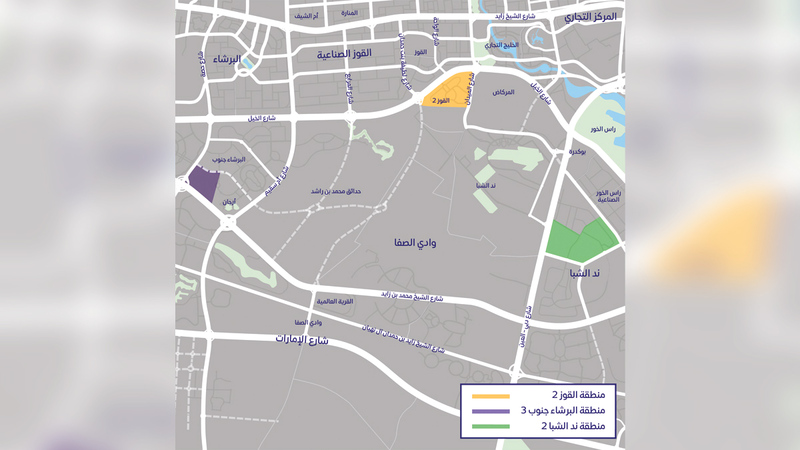 The Roads and Transport Authority in Dubai has awarded a contract for the implementation of internal roads in three residential areas, Al Quoz Second, Nad Al Sheba Second, and Al Barsha South Third, with a total length of 34.4 km, and the project is expected to be completed in the second half of 2022. This comes in implementation of His Highness’s directives Sheikh Mohammed bin Rashid Al Maktoum, Vice President and Prime Minister of the UAE and Ruler of Dubai, and the instructions of His Highness Sheikh Hamdan bin Mohammed bin Rashid Al Maktoum, Crown Prince of Dubai and Chairman of the Executive Council, to develop and improve basic infrastructure in residential areas, to meet the needs of population and urban expansion in Emirate, improving the quality of life and achieving happiness and prosperity for the population

The Director-General and Chairman of the Board of Directors of the Authority, Mattar Muhammad Al Tayer, said: “The implementation of the internal roads project comes within the framework of the Authority’s keenness to develop basic infrastructure, including road works, lighting, and rainwater drainage in residential areas,” noting that the internal roads project in The second Al Quoz area, located between Al Khail and Maidan Streets, includes the implementation of a 16-kilometre network of main roads, where roads will be paved in the area, along with infrastructure works that include the construction of a rainwater drainage network and street lighting works. He added: “The internal roads project in the second Nad Al Sheba area includes paving 12 km of roads, implementing parallel parking lots, lighting, and linking with the rainwater and sewage network, in addition to evaluating the existing internal roads, which are 27 km long, from an engineering point of view. Traffic safety and rainwater drainage, and the (Nad Al Sheba Second) area is a residential area bordered by three main roads, which are the Dubai-Al-Ain Road from the west, Nad Al Hamar Street from the east and south, and Manama Street from the north,” indicating that the efficiency of the road will be raised. The traffic of internal roads in Nad Al Sheba II, in terms of safety and traffic flow, improving entrances and exits in the area, implementing roads and links serving all plots of land within the area, and providing two new entrances and exits to and from Manama Street and Nad Al Hamar Street, to improve linking the area with neighboring areas.

Al Tayer explained that the internal roads that will be implemented in the Al Barsha area south of the third, are six kilometers long and 400 meters long, and the project is located in the gardens of Mohammed bin Rashid surrounded by Al Barsha south of the second from the north, and the first and fourth from the south (Motor City and Sports City), and Arjan from The project also includes road lighting works, parking lots, and bus stations, stressing that the project contributes to facilitating access to the plots of land within the recently built Al Barsha South Third area.

A network of internal roads

The Roads and Transport Authority is currently implementing a network of internal roads with a length of 77 km, including single roads with a length of 68 km, and double aggregate roads with a length of about nine km, in the second area of ​​Al Khawaneej, where the project executing company is putting the final touches on it, while the authority completed two road paving projects last year. The interior in the areas of Sama Al-Jaddaf and Oud Al-Muteena 1, where the Sama Al-Jaddaf project included the implementation of 12-kilometer-long roads, linking them with the surrounding main roads, such as Al Khail Street from the south and Sheikh Rashid Street from the north, and the construction of a number of intersections, including two intersections controlled by traffic lights, to In addition to the lighting works, the Oud Al Muteena 1 project included the implementation of paving internal roads for the Mohammed bin Rashid Housing Establishment, with a length of seven kilometers, and linking them with the surrounding road network and ensuring safe and easy entry and exit for road users to and from neighboring areas. It also included the implementation of lighting works, side parking and sidewalks. pedestrian.

• 77 kilometers of internal roads implemented by the Roads and Transport Authority, including single roads and dual aggregate roads.