“Dubai Roads” awards a contract for the development of Seih Al Dahl Road project, with a length of 11 km 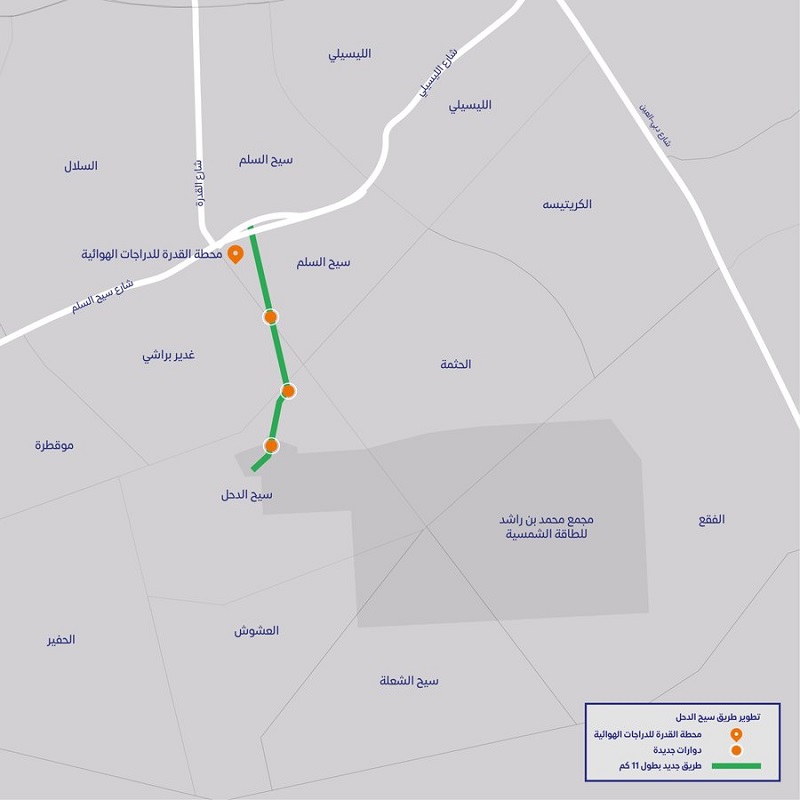 The Roads and Transport Authority has awarded a contract for the development and expansion project of Seih Al Dahl Street, which links Seih Al Salam Street and the Mohammed bin Rashid Al Maktoum Solar Energy Complex. In each direction, a median island, and (3) roundabouts to facilitate movement in all directions, and the road will connect with the entrances to Al Qudra Lakes.

The Director-General and Chairman of the Board of Executive Directors of the Roads and Transport Authority, Mattar Mohammed Al Tayer, said, “The project aims to increase the road capacity of (1800) 800 vehicles currently to (4000) vehicles in each direction in order to accommodate the continuous growth in traffic volumes, and facilitate the access of residents and visitors to the existing oases. On both sides of the road, desert areas and the Mohammed bin Rashid Al Maktoum Solar Energy Complex.

Al Tayer indicated that the project starts from the roundabout located at the intersection of Seih Al Dahl Road with Seih Al Salam Street in the north, directly after the Al Qudra station for bicycles, heading towards the Mohammed bin Rashid Al Maktoum Solar Energy Complex in the south. The project includes the implementation of a new road with a capacity of two lanes in each direction and the implementation of ( 3) Roundabouts along the road to facilitate the access of road users to the oases located on both sides of the road, Al Qudra lakes and desert areas and to facilitate the process of turning back.

This project comes as a continuation of the development projects implemented by the Roads and Transport Authority during the last period, including the Dubai Cycling Track project, which has a length of approximately (23) kilometers, and is linked with the existing bicycle path in the Seih Al Salam area on Al Qudra Street, at the gate of Dubai Racecourse. For bicycles in the direction of Emirates Road, and from there to Latifa Bint Hamdan Street, Sheikh Mohammed bin Zayed Street, then to the Al Barari area, all the way to the Nad Al Sheba area, and it includes bicycle paths in the Seih Al Salam area, which is approximately 115 kilometers long on a number of public facilities, And shops for renting bicycles and related tools, as well as a fully-equipped medical clinic, and (10) rest points along the path, equipped with seats and parking for bicycles.

It is worth noting that the authority has implemented a number of development projects in the area, including the development of Seih Al Salam Street, which included the expansion of the street from Al Qudra roundabout near the bicycle restroom to the intersection of Dubai-Al Ain Street, with a length of 21 km, passing through Al Lisaili and Al Marmoom areas. (9) roundabouts in the intersection areas to ensure the smooth flow of traffic and raise the level of traffic safety in those areas, in addition to (4) crossings for camels and horses, a bike path, service roads, and parking lots for vehicles, with the expansion of the existing parking spaces in Dubai International City for Capacity, and the project included Also lighting works for roads, and implementation of a rainwater drainage network.