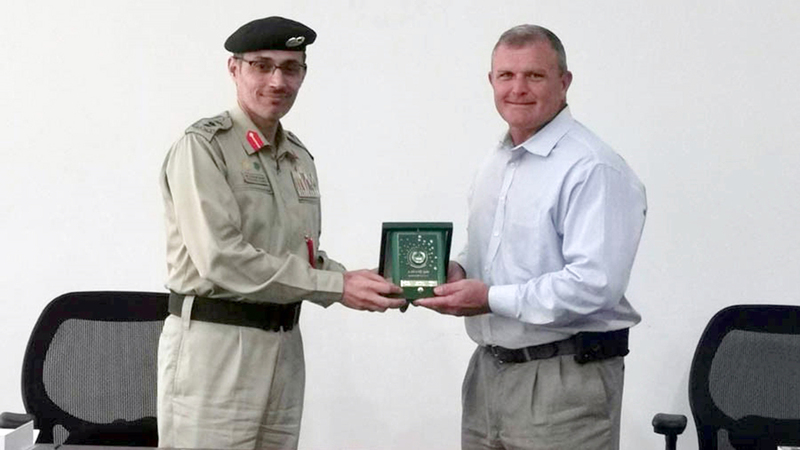 Dubai Police called on community members to be careful to protect themselves and their families from infection with the Corona virus by addressing the spread of the epidemic, stressing the importance of the family’s role in the recovery stage.

The Acting Deputy Director of the General Traffic Department at Dubai Police also discussed, with a delegation from the Georgia State Institute in the United States of America, the development of innovative traffic courses.

In detail, the Director of the General Department of Security of Organizations, Facilities and Emergency in Dubai Police, Major General Abdullah Al Ghaithi, during the opening of a workshop set up by Dubai Police to introduce the rehabilitation program for the post-Corona virus syndrome, which was held via video call, praised the performance of the first line of defense, led by doctors and nurses. Noting their sincere efforts during the pandemic, he also thanked the recovery management and governance team for their good performance and their concern for the comfort and happiness of society.

Dr. Jassem Badr, a consultant psychiatrist, spoke about the recovery phase, calling on community members to protect themselves and their families, and to protect and care for their community, by addressing the spread of the epidemic.

The nutritionist, Fawzia Al Jasmi, addressed the need to pay attention to public health in terms of physical, nutrition and prevention.

Family medicine specialists, Dr. Khaled Muhammad Saeed, Dr. Muhammad Al-Zarouni, and psychological counselor Lina Al-Jabawi reviewed the role of the family regarding the next stage and the recovery stage, as it is the nucleus of society.

The workshop, which was attended by a number of employees from various public departments and police stations, featured a film by the Dubai Police Health Adviser, Dr. Brigadier Ali Muhammad Sinkal, in which he spoke about the tasks of the first line of defense in addressing the pandemic and protecting society.

On the other hand, the Acting Deputy Director of the General Traffic Department at Dubai Police, Colonel Issam Ibrahim Al Awar, discussed, during his meeting with a delegation from the Georgia State Institute in the United States of America, strengthening cooperation and strengthening the bonds of partnership between the two sides.

The delegation listened to an explanation of the nature of work in the General Department of Traffic in general, and the Department of the Traffic Institute in particular, and was briefed on the courses and training programs offered by the Institute to its employees.

The two sides discussed issues related to the adoption of the traffic institute’s courses within the courses held by the Georgia State Institute, and the development of innovative traffic courses.