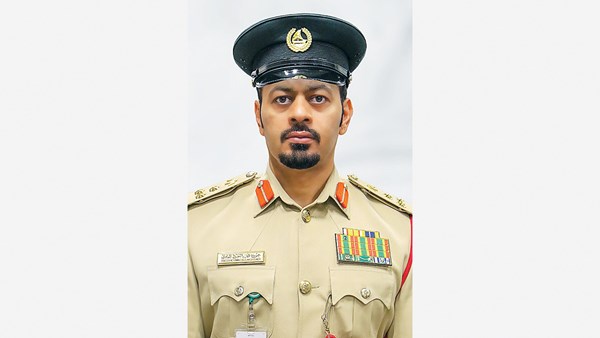 The Pakistani traveler (S.S.S.) did not know that he had lost his bag, which contained more than seventy-seven thousand dirhams in Dubai, until the Dubai Police called him and informed him that his bag and the sums of money and documents in it were safe and secure at the Excavations Department of the General Directorate of Security Dubai Police Airports.
The details are related to the delivery of a black bag containing sums of money in different currencies, including 1020 UAE dirhams, 67,55 Saudi riyals, 2,000 British pounds, 3,000 Pakistani rupees, and some personal and family documents to the police office in Building 3. After checking the contents of the bag by the police, there were no direct contact numbers with the person with the bag, and through personal cards, some of his relatives in the United Kingdom were reached, who in turn informed the police officers with his contact numbers, to find that he returned again heading To his homeland, Pakistan, via Dubai International Airport (transit), and in contact with Emirates Airlines to find out the date and time of the flight and coordination, the Dubai Police handed him the bag.
Brigadier General Hammouda Bal Suwaida Al Ameri, Acting Director of the General Department of Airport Security, honored the taxi driver for his honesty and keenness to hand over the money to the police office at the airport, stressing at the same time his confidence in the personnel of the General Department, their interest and keenness to put a smile on the faces of all users of Dubai airports, and to provide comfort them and make them happy, and make great efforts to reach the owners of collectibles and property and deliver them to them anywhere in the world, which enhances their level of confidence in Dubai Police, thanks to the professionalism of qualified human cadres and their quick dealing with all communications and reaching their owners as quickly as possible to reassure them, and enhance their sense of security and safety as a basis It is used by visitors, tourists and people passing through Dubai airports, with the aim of reaching the emirate to the happiest and safest city in the world.

See also  Transport bonus, click day tomorrow: here's how to get it