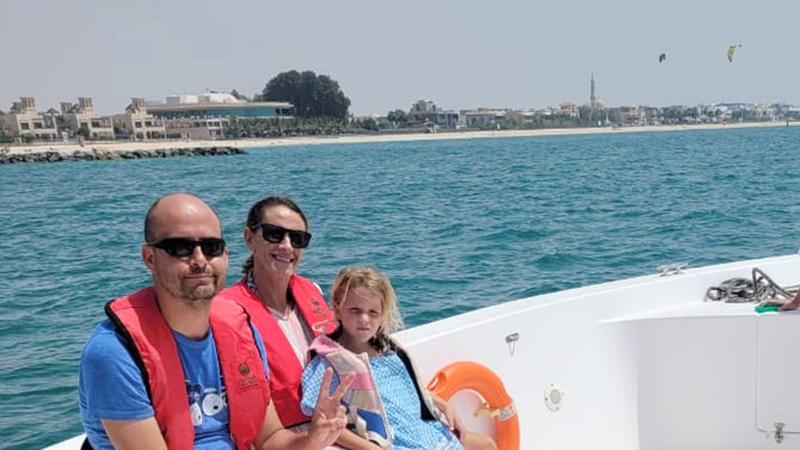 The marine rescue patrols at the Dubai Police Ports Police Station succeeded in rescuing a Spanish family of six, including children, after their boat broke down in the open sea opposite the Jumeirah rock breaker due to a technical malfunction. Strong and high waves.

The head of the Spanish family praised the quick response by the Dubai Police, noting that he was heading on a cruise with his family members, but he was surprised by the engine failure and the loss of control of the boat as a result of the strong and high sea currents.

He said that in less than five minutes, the marine rescue patrol arrived, and its members worked to reassure him and his family and then transported them to land, noting that the marine rescuers were not satisfied with transporting the family and checking on them, but were keen to pull the boat to the port.

For his part, the Director of the Ports Police Center, Colonel Dr. Hassan Suhail Al Suwaidi, stated that Dubai Police received a report from the Command and Control Center Department about the incident, so the marine rescue patrols moved immediately, pointing out that the patrols are deployed in nine marine points, which qualifies them to deal with accidents. emergencies as quickly as necessary 24 hours a day.

In addition, the head of the Maritime Rescue Department, Lieutenant-Colonel Ali Abdullah Al-Qasib Al-Naqbi, said that the maritime rescue patrols moved as soon as they received the communication to the location of the boat, and it turned out that it was broken, with a family of six members on board, including children, indicating that the rescue team transferred the family to The rescue boat, because the waves were high and the boat was in the course of the navigation line and in danger.