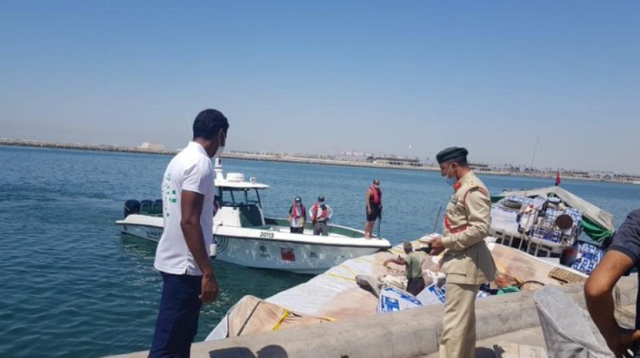 Maritime rescue patrols and maritime security at the Ports Police Station of Dubai Police managed to rescue 6 Asian sailors and prevent their wooden boat from sinking after water seeped into it as a result of a crack in its structure caused by the increased weight of the cargo.

The head of the Maritime Rescue Department, Lieutenant Colonel Ali Abdullah Al-Qassib Al-Naqbi, confirmed that the Dubai Police Command and Control Center Department received a report from the boat’s captain about water leakage into it while leaving the country via the Dubai Creek heading to an Asian country.

Lieutenant Colonel Al Naqbi pointed out that the Maritime Rescue and Maritime Security patrols, with the follow-up of Colonel Dr. Hassan Suhail Al Suwaidi, Director of the Ports Police Center, moved to the location of the boat in the Al Khor area, and immediately worked to rescue the sailors and ensure their safety and secure their access to safety.

Al Naqbi added: The marine rescue divers found that the crack in the structure of the boat was large, which contributed to the leakage of huge quantities of water into it, so an immediate decision was taken to work on directing the boat to the nearest dock before it sank completely.

Lieutenant Colonel Al Naqbi pointed out that the Maritime Rescue and Maritime Security patrols succeeded in delivering the boat to the dock, and then the divers worked to use special rescue balloons in the process of floating the boat, and also used a mechanical winch to raise and pick up the boat.

Lieutenant Colonel Al Naqbi stressed that the success of the floatation process contributed to preventing the boat from sinking, and working to unload the cargo completely, in addition to working in cooperation with Dubai Municipality to recover the goods that floated on the surface of the water, which contributed to preventing the owners of the goods from incurring large financial losses.

Lieutenant Colonel Al Naqbi urged sailors and boat captains to ensure the safety of their boats before starting the journey, by inspecting the various electronic devices and equipment on board and verifying the health and safety of their entire body.

Lieutenant Colonel Al Naqbi called on the boat drivers to use the Dubai Police application “sail safely”, which provides them with the feature to enter the trip planner and the locations to which they are expected to go, in order to help them in the event of any emergency situation, stressing that the application provides sailors and boat drivers the SOS feature with a click button.