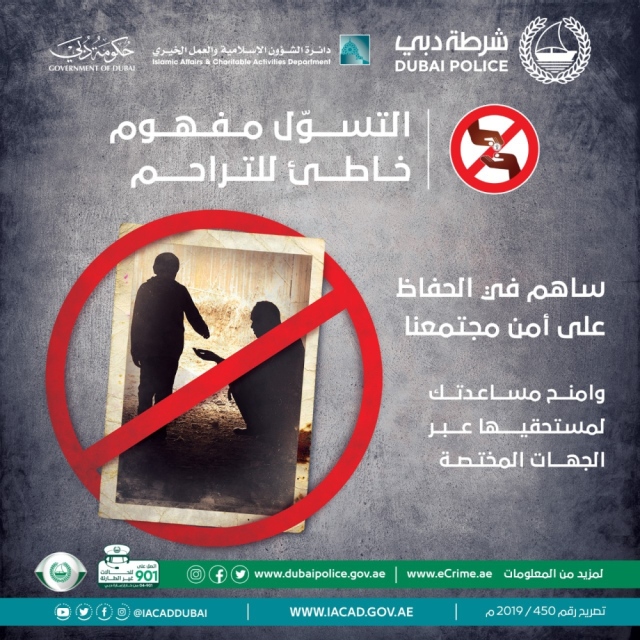 The Dubai Police General Command launched an annual awareness campaign under the title “Begging is a wrong concept for compassion”, with the aim of enhancing societal awareness of the dangers of the phenomenon of begging and preserving the security and stability of society, in addition to controlling beggars in public places, and it continues throughout the month of Ramadan, in cooperation with partners, affirming that It has an integrated security plan to combat begging.

And called on the public to report the beggars who are taking advantage of the month of Ramadan to beg the passers-by and collect money in light of the current circumstances.

The Director of the General Department of Criminal Investigations and Investigations, Brigadier General Jamal Salem Al-Jallaf, said that the campaign “beggary is a wrong concept of compassion” contributed to reducing the number of beggars annually due to the strict and resolute measures taken against arrested beggars, as during the past three years it resulted in the arrest of 842 beggars of various nationalities. Pointing out that the administration annually develops an integrated security plan to combat begging, by intensifying patrols in the places where beggars are expected to be present.

He added that the phenomenon of begging threatens the security of society and the life and property of its members, harms the image of the state, and distorts its civilized appearance, pointing out that the problem of begging is linked to serious consequences, including committing some crimes such as theft and pickpocketing, exploiting children, sick and people of determination in begging, and achieving unlawful gains.

Al-Jallaf explained that there are official bodies, charitable organizations and societies that anyone can resort to to request financial assistance or to obtain a “fasting breakfast” and other things, calling on community members to contribute positively with the security services in curbing the phenomenon of begging, by donating the money of their charity to charitable organizations and associations. So that they can ensure that it reaches the poor and needy, and that they are not a cause of the spread of crimes committed by beggars under the cover of begging.

The director of the infiltrators department in the department, Colonel Ali Salem, called for not responding to beggars, or dealing with them with feelings of pity and sympathy for their appearance, and assisting the police forces by immediately reporting any beggar who is spotted anywhere on the call center (901) or the police eye platform from Through the smart apps of Dubai Police, and the (E-Crime) service for reporting cyber crimes.

He warned against falling victims to e-mails of sympathy sent by beggars through social media and e-mail that contain fabricated stories, calling for them to be ignored and not to be led or believed, and to report them through the E-Crime platform concerned with receiving reports of members of the public related to cybercrime in a smooth and easy manner through the e-mail address. www.ecrime.ae.