“Dubai International for the Arabian Horse” … the $ 4 million race 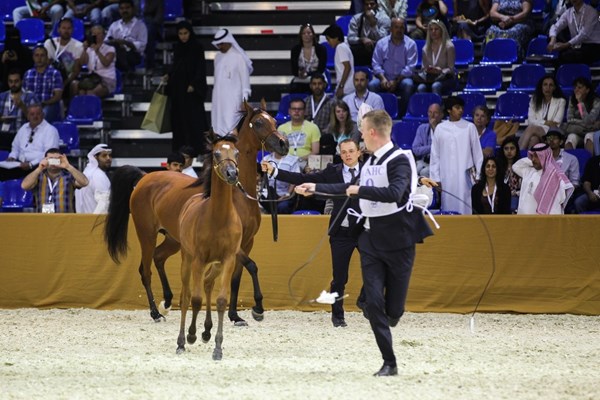 The directives of His Highness Sheikh Mohammed bin Rashid Al Maktoum, Vice President, Prime Minister and Ruler of Dubai, may God protect him, and under the patronage of His Highness Sheikh Hamdan bin Rashid Al Maktoum, Deputy Ruler of Dubai and Minister of Finance, the activities of the eighteenth edition of the Dubai International Horse Championship will start tomorrow, Thursday, Al Arabi, in conjunction with the seventeenth edition of the Dubai International Horse Fair, which will continue until Saturday in Zabeel Halls 4, 5 and 6 in the Dubai World Trade Center. 210 horses from 6 countries are competing in 16 categories to qualify for 6 championships with prizes of $ 4 million «15 million AED ».
The event is a new scene from the scenes of organizing events inside the country, which are held according to precautionary measures and the application of protocols issued by the concerned authorities to prevent the outbreak of the Corona virus, and it confirms the successes from one event to another.
His Highness Sheikh Hamdan bin Rashid Al Maktoum welcomed the participants in the 2021 edition, and His Highness said: “The tournament is a test and a challenge to determination and ability to coexist with circumstances, while being keen to preserve the heritage of our country and achieve its renewed ambitions, as the championship comes at a precise time in which our country begins 50 years in its history. With ambitions touching the sky, and just as the initiation of the past fifty years from the desert of Saih al-Sedira, the initiation of the new fifty from the desert of Mars, which translates the scientific development, knowledge and economic development and the path of innovation in the country of achievement ».
His Highness added in the opening speech of the official book of the championship: “We were keen to establish a new version of the tournament that comes within the framework of restoring the pace of life, business and sports. Horse races in the country have also succeeded in making their way amid precautionary measures, which is in harmony with the championship that comes amid the shrinking of regional championships. And international, is what makes it a meeting place for the elite of Arab horses ».
His Highness added: “We were keen to move the wheel of trade and promotional exhibitions by holding an exhibition of horse supplies, which is a front for the championship, with the participation of the largest international companies, which makes the exhibition a vital role in shaping the future of the equestrian industry and enhancing the country’s reputation among the best markets for horse products in the world.”
The competitions on the first day of the tournament will witness the establishment of 9 rounds, starting with the foals of less than a year, then the foals at the age of less than a year, then the fillies of the age of “A” and “B” and at the age of two years, then at the age of 3 years, and the championship moves to the mares category from 4 to 6 years Then a group from 7 to 9 years old, and the first day concludes the seventh session for the mares group of 10 years or more.
The second day begins with the most successful class in its first year, “A” and “B”, and the most skilled at the age of two years and the most skilled at the age of 3 years. The championship moves to the best season from 4 to 6 years and the best from 7 to 9 years, and the second day ends with the 14th round of the best 10 years or more. The third day witnesses the six main tournaments, which are the one-year-old foals championship, the one-year-old colts championship, the foals championship, the colts championship, the mares and mare championships, in addition to the round of the foals and colts championships born after the first of October 2020.