“Dubai Health”: Every 10 are in intensive care due to “Corona” .. including 9 who are not vaccinated 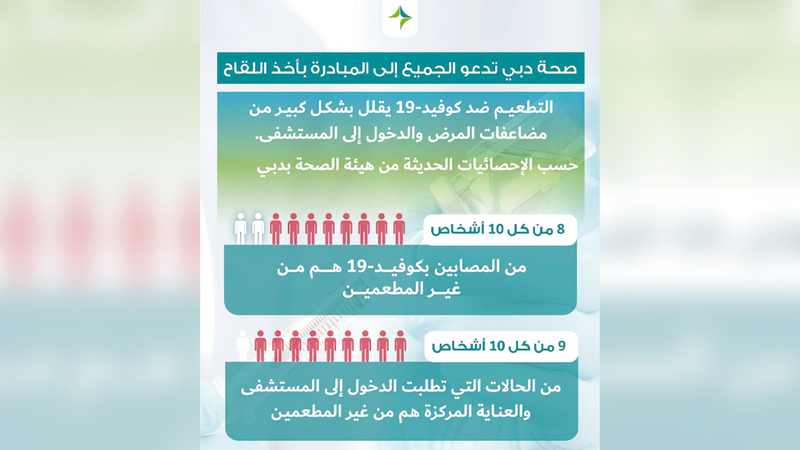 Alawi Al Sheikh Ali, Deputy Director General of the Dubai Health Authority, confirmed that recent specialized studies showed that eight out of every 10 infections with the “Covid-19” virus were exposed to unvaccinated people.

And that nine cases out of every 10 admitted to hospital or intensive care, are also unvaccinated.

Alawi Al-Sheikh stated, during a telephone interview via the “Emirates News” bulletin on Dubai TV, that the number of people who received the “Corona” vaccine in the authority’s centers, since the beginning of the national vaccination campaign, reached two million and 300 thousand people, adding that the percentage of individuals who received one dose At least 83% of the targeted groups and eligible individuals received the vaccine, while 64% of them received two doses of the vaccine, “which indicates that the authority has made great strides in the vaccination process.”

He said that the remaining percentage of the target groups is 20%, calling on everyone to take the vaccine to eliminate the epidemic.

He stated that the authority is conducting ongoing studies and research, and is keen to read data related to injuries and vaccinations, in coordination with the Mohammed bin Rashid University of Medicine and Health Sciences, and the “Dubai Data” Foundation, noting that “the studies have proven the efficiency of the locally provided vaccines, in line with the data and information announced globally.” ».

He said that the 20% who are not vaccinated constitute between 80 and 90% of the cases that need hospitalization or intensive care.

He stressed that the authority aspires to reach 100% of the target groups’ vaccination rate.