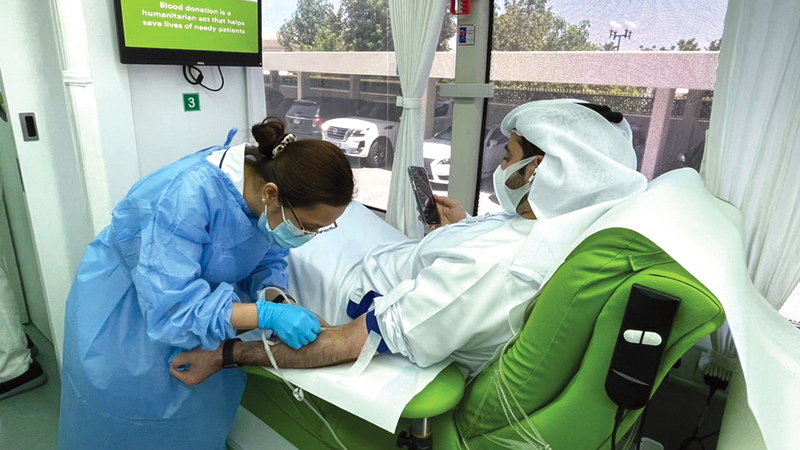 The Dubai Health Authority reported that the blood units obtained from donors are subject to a number of accurate tests, and three main components are extracted from them to treat various diseases, and stated that the “My Blood for My Country” campaign succeeded in collecting 621 new units within a week, bringing the number of units to 7,179 units.

The Director of the Laboratory and Genetics Department at the authority, Dr. Hussein Al-Samt, explained that according to the authority’s statistics, the number of people who came to donate blood reached 8,094, and 7,179 units were obtained from them, while 916 donors were rejected for not meeting the criteria and conditions for donation.

He pointed out that the blood unit, once obtained, goes through seven accurate tests, the most prominent of which is the detection of viruses with DNA technology, to ensure the safety of blood before it is transferred to the patient, stressing that the UAE is one of the best countries in the world in terms of ensuring the safety of blood for the recipient, and detecting diseases that may be in it.

He continued: “The blood unit is divided into three main components, which are blood plasma, which is usually used to treat cases of fluid deficiency in the body and burns, and platelets to treat bleeding cases, as well as concentrated blood units to treat diseases, including blood pressure, while whole blood units are given to treat some Newborn cases.

He pointed out that the increasing demand by donors and government agencies helped to provide a stock of all groups, noting that blood type (0+) is the most in demand among all groups, while type (AB-) is the least requested, stressing that the needs of all patients Avaliable without any shortage.

He stated that the Dubai Blood Donation Center is the first center to be accredited by the World Blood Banks Association, to ensure the safety of donors and patients receiving blood.

Al-Samt stressed that the campaign continues to implement external campaigns targeting governmental and private institutions, in addition to distributing mobile donation buses in different regions, with the aim of collecting the largest possible number of blood units and providing an adequate stock of blood of all types.

He added that a single blood unit can save the lives of three people, whose health condition requires a blood transfusion, calling on community members, citizens and residents, to participate in the campaign, to provide the largest amount of blood to save lives.

Al-Samt pointed out that the annual increase in the amount of blood collected by the center is due to the community’s growing awareness of the importance of donating blood, in addition to the presence of mobile buses for donation, which saves those wishing the hardship of reaching the center.

The campaign is implemented in a strategic partnership and cooperation between “Emirates Today” newspaper, “Al-Amin” service, and the Dubai Health Authority.

The “My Blood for My Country” campaign was launched in its first session in 2012, under the patronage of His Highness Sheikh Hamdan bin Mohammed bin Rashid Al Maktoum, Crown Prince of Dubai and Chairman of the Executive Council.

His Highness was the first to donate blood at the moment of the campaign’s launch, which contributed to its success and encouraged community members to participate in it, especially after His Highness emphasized the importance of the initiative, saying that “blood donation is the best gift that a citizen and resident can give, as an expression of love for the homeland, especially since there is Sick and wounded need every drop of blood.”