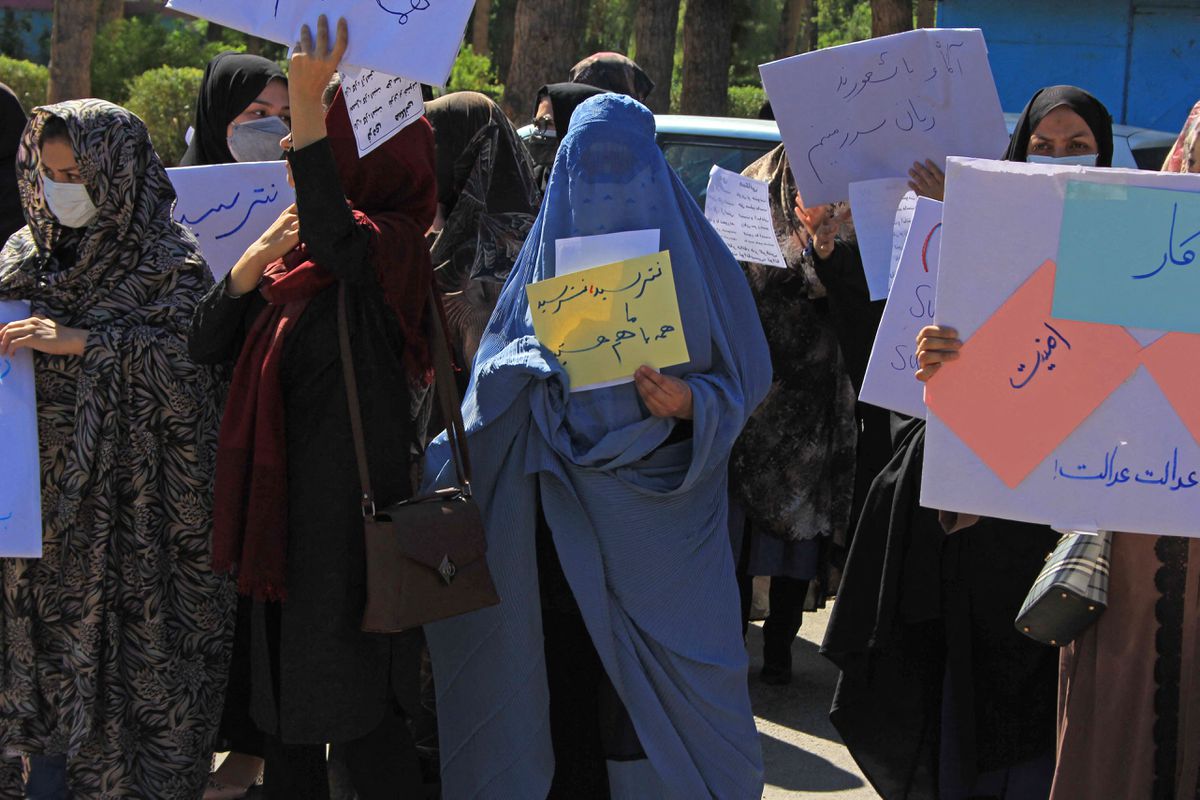 Several dozen Afghans have demonstrated this Thursday in Herat, western Afghanistan, to claim their right to work and demand the participation of women in the new Taliban government. Their brave demand comes the day after a senior guerrilla official said that they were counted on, but not for the Executive or any other position of responsibility. Concern for their future is leading many professionals to leave the country, exacerbating the brain drain.

The women gathered in front of the provincial government headquarters in Herat, Afghanistan’s third largest city, with banners reading “Don’t be afraid, we are all together” and “No government can survive without the support of women,” according to the images that the local media have disseminated. This latest message has become a recurring slogan of Afghan activists.

“Without women in government and meaningful participation in the power structure, the country is like a bird with a wing. Can a bird fly with only one wing? Of course not, ”Fawziah Koofi has repeatedly tweeted, before leaving Afghanistan this week, amid growing insecurity.

Without women in the government and a meaningful participation in the power structure, the country looks like a bird flying only with one wing. Can a bird fly with one wing? IT CERTAINLY CAN NOT! https://t.co/vKBIXKzKG3

One of the organizers of the unusual Herat protest, Basira Taheri, told the agency France Presse that she wanted the Taliban to include women in the new government. “We want you to consult us. We don’t see any women in their meetings, ”he added.

The prospects are not rosy. On the eve of the announcement of the new government, the number two from the Taliban Political Office in Doha, Sher Mohammad Abbas Stanikzai, has told the BBC that, although women will be able to continue working, there may be no place for them in future government or other executive positions. However, this will undoubtedly be a factor that Western countries will take into account when it comes to whether or not to recognize the Taliban regime.

Among the protesters were women’s rights activists, civil servants, workers and students. Under the new regime, they fear losing the gains made in the past two decades. Three weeks after the Taliban took Herat, local officials for the group have not yet clarified what rules they will impose. In his previous dictatorship (1995-2001), women were confined at home and prohibited from working outside the home.

Now the information is contradictory. Some leaders have said that they will be able to study and practice their professions “with respect to Islamic law.” However, there are testimonies from female officials who have been prevented from taking up their posts and, in some places, such as the Herat industrial estate, they are not accepted either. The Taliban deputy governor of that province, cleric Shirahmad Ammar, has said they are “awaiting a decision from the leaders.”

There is no time to lose for Afghans. “Many women are the only source of income for their families. Preventing them from working puts their lives in danger, ”says an activist who has followed the demonstration with interest from Kabul. Also in the capital there have been a couple of protests in the same direction since the arrival of the Islamists. “The Taliban cannot rule a country without 30% of its workforce,” said activist Pashtana Zalmai, who has said she is willing to lead a burqa, but that it will not compromise on the right of women and girls to education.