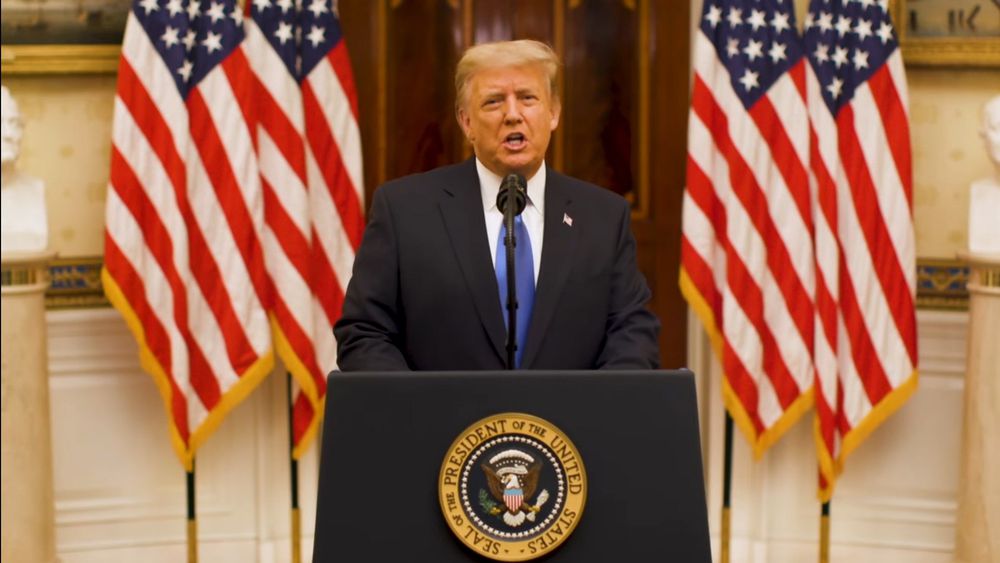 It is difficult to think of a week that conveys as much defeat and loneliness as the last one that Donald Trump has spent at 1600 Pennsylvania Avenue in Washington. Abandoned by his most faithful political circle, with the agenda completely blank and orphaned by the speaker of social networks, the businessman addicted to the spotlight leaves the presidency in an atmosphere of mourning. This Tuesday, around four in the afternoon, the White House released its farewell speech to the American people in which it reviewed what it considers great achievements of its Government and sent a message to the grassroots: “This movement has just begun.”

Just hours earlier, his Senate party leader Mitch McConnell had publicly held him accountable for the lies that incited the violent assault on the Capitol on January 6, and his vice president, Mike Pence, a faithful squire for four years, had sent his program for the next day with the inauguration of the new president, Democrat Joe Biden, as the only activity planned. Therefore, he would not go to the Andrews military base to say goodbye to his boss. Trump, proud to the point of illness, will break a 150-year tradition and will not attend the swearing-in of his successor, but will leave Washington early in the morning – still in the capacity of president – and, after a military ceremony, will take Air Force One for the last time, bound for Florida.

“We have restored strength at home and American leadership abroad. The world respects us again. Please, do not lose that respect, “said the Republican in his speech to the nation, about 19 minutes. He did not mention Biden once, he still did not acknowledge his victory, although he was also very careful to stir up new infundies of electoral fraud, stalked as it is by a new impeachment or impeachment.

He did claim the success of the US economy, which before the pandemic was going through the longest period of growth in history, was taken out by the US military retreat – Trump was, in effect, the first president in a decade that has not started a new war – and, above all, he defended the triumph of a grassroots idea: “It was about ‘America first’ because we all wanted to make America great again. We restore the principle that a nation exists to serve its citizens, ”he said. “Together we build the largest political movement in the history of this country,” he also said.

Everything is bombastic with Trump, superlative. The businessman does not feel attacked, but rather declares himself “the victim of the worst witch hunt in history” or does not defend himself as not just a racist, but declares himself “the president who has done the most for blacks since perhaps Abraham Lincoln, ”which abolished slavery. His messages on Twitter, the favorite way of communicating with the world, were usually full of exclamation marks and capital letters.

We must already speak of Trump in the past because, regardless of what happens as of this Wednesday, if from his refuge in Florida he tries to reactivate a new electoral crusade for himself or for his family, his current political stage has ended all those of the law. The brand itself has been battered for the moment, the Republican establishment that protected them for four years ignores and will soon start looking for its next candidate. The formula remains, Trumpism, a daring nationalist demagoguery, which has cultivated the cult of the leader.

Trump, a reality TV star New York builder, an agent of chaos in the Republican Party, was able to capitalize on conservative anger in a way that earned him the White House. He had the nose to champion a protectionist turn on trade and immigration that resonated in battered parts of America and drove the biggest tax cut. Meanwhile, the United States saw its president fraternize with the world’s worst dictators, throw packages of toilet paper at the victims of a hurricane, or talk about the “good people” among those neo-Nazis who marched in Charlottesville in 2017.

With the pandemic, his fall into hell began. He enlisted in denial, first, and in extravagance later, even suggesting that the population inject itself with disinfectant to cure. The next day he claimed he was joking. More than 400,000 people have died in the United States from covid-19. This Tuesday, he polished his management at the expense of the pharmaceutical research: “It would have taken another Administration three, four, five, and even up to 10 years to develop a vaccine. We did it in nine months ”.

The politics of the United States, a country without a monarchy, but proud of presidential rites, is full of symbols of moments for posterity that summarize characters and eras. Barack Obama said goodbye to the Americans in a massive and emotional ceremony in his city, Chicago. Trump had projected something similar, which would also mean the beginning of a new stage in which he would continue to be a predominant voice. If he succeeds, he must wait. His own excesses have decided him.

Extreme winter weather: How long does the cold spell last? Meteorologist with an icy cold forecast