Dominic: Dubai saved the “People of Determination” tournaments during the “pandemic” 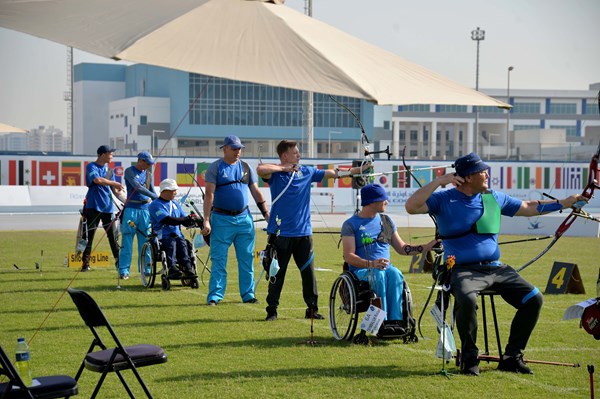 Dominic Ullman, Chairman of the International Bow and Arrow Federation’s Disability Committee, confirmed that Dubai saved the Worldwide Championships of People of Determination during the Corona pandemic by organizing the Bow and Arrow Championship for the seventh year in a row, and said: We as representatives of the International Federation are happy to hold the tournament in Dubai in light of the difficulty of organizing such Worldwide tournaments during the “pandemic”, and the challenges facing the world due to Corona.
He added: Dubai is distinguished during the organization of its tournaments by providing an appropriate and qualified environment and various services for “people of determination” players, especially wheelchair users. The number of this category of wheelchair users from players and delegations participating in any bow and arrow championships for People of Determination is about 70%. Of the total number of participants.
He continued: “The Dubai version” represents a golden opportunity for players to reserve their seats for the upcoming Paralympic event in Tokyo, especially as it is the first bow and arrow tournament for people of determination in the world to be organized after the pandemic in 2021, and were it not for the severe restrictions on travel to many countries during the pandemic. The number of participants in this important global event has doubled, especially since this year’s Fazaa tournaments are exceptional for the situation we are in with regard to precautionary measures, and the cancellation of many events accompanying Fazaa tournaments, as in past years, in addition to the strict procedures at all airports until arriving to Dubai and vice versa, But our goal is to return to the bow and arrow competitions for people of determination in 2021, to make Dubai the first of those tournaments after a full year of compulsory suspension due to this “pandemic”.
Dominic referred to the positive reactions about the success of the Organizing Committee in organizing the Twelfth International Athletics Championship in Fazza 2021, “The Probe of Hope”, describing that success as one of the most prominent news that we followed, as the organizing committee was able to implement the highest standards of precautionary measures codified in the championship protocol, despite The large number of participants, which exceeded 800, which is a positive indication for the organization of the seventh edition of the bow and arrow championship, which is considered exceptional by all standards.
On the impact of the “pandemic” on the Tokyo Paralympics, he believes that the answer to the question is difficult, hoping that it will not affect the course of events and participate in the upcoming Paralympic event, indicating that many of the qualifying tournaments for Tokyo have been canceled, as only two tournaments will be organized, one in the Mexican city of Monterrey and the second in the Republic. The Czech Republic, pointing out that Tokyo has revealed the new system that will be applied during the games in terms of precautionary measures and distances, which will overshadow the Paralympic Games flavor that we are used to before, but our goal in this exceptional year is sports and the safety of all participants, which are considered More important.

Vaccines against Covid-19: the President of the European Commission does her mea culpa