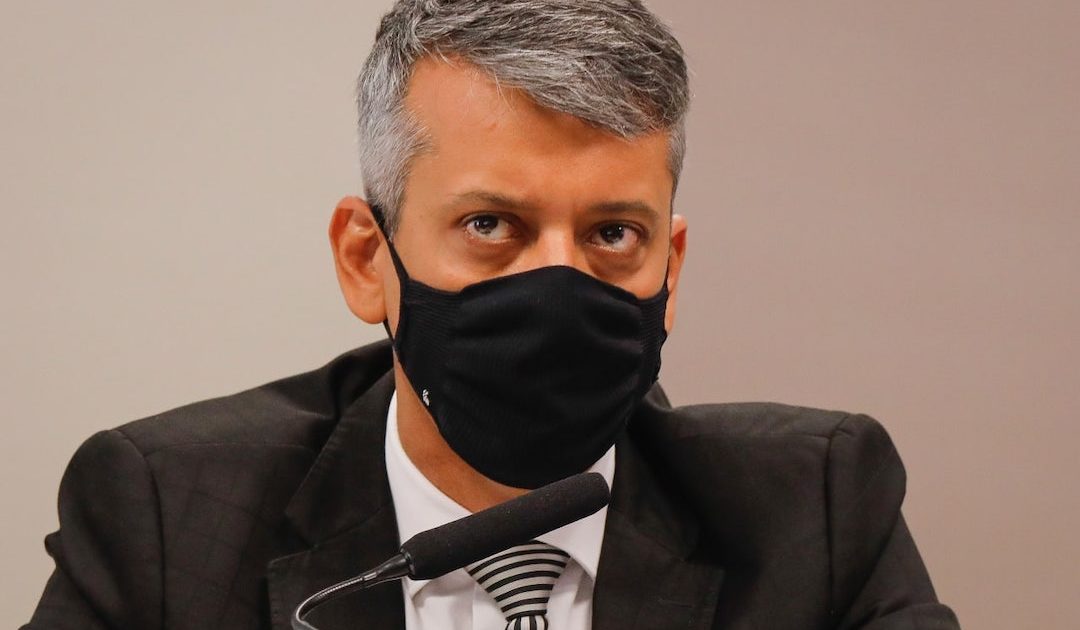 The former director of the Department of Logistics at the Ministry of Health, Roberto Ferreira Dias, said this Wednesday (7.Jul.2021) that the meeting with the Minas Gerais Military Police officer and freelance salesperson at Davati Medical Supply Luiz Paulo Dominghetti Pereira was “by chance”. He responded to questions from senators during Covid’s CPI (Parliamentary Committee of Inquiry) in the Senate.

The 2 met on February 25 at Vasto restaurant, in Brasília Shopping, in the central region of the federal capital. Dias claims that he had arranged a beer with a friend, José Ricardo Santana, and that Dominghetti joined them, without his knowledge, brought by retired Army colonel Marcelo Blanco da Costa, and that they would have appeared spontaneously.

Blanco worked in a commissioned position in the Ministry from May 7, 2020 to January 19 of this year. Days before the dinner, on February 22, the company Valorem Consultoria em Gestão Empresarial had opened in Brasília.

During the meeting, according to Dominghetti, Dias would have asked for a bribe of US$ 1 per dose of vaccine negotiated.

Audios taken from Dominghetti’s cell phone, however, suggest that their meeting at the mall may not have been accidental, and that there may have been other contacts between the 2.

Speak at the CPI

At another moment, senator Renan Calheiros (MDB-AL) asks Dias who introduced him to Dominghetti. Dias answers: “Luiz Paulo Dominguetti was born at this incidental dinner, presented by Colonel Blanco, who no longer worked at the Ministry of Health”.

Still answering Calheiros, Dias stated that the meeting with Dominghetti at dinner was “by chance”. Dias also said: “I didn’t have an agenda with him, Senator” and “I never met Dominguetti”.

“You are going to a mall, you are going to a restaurant. You go to the restaurant with a friend who has expertise in exactly this area, and there you happen to meet a person who is negotiating, presenting to the Government a negotiation of 400 million doses, alongside Blanco, who has already he was also a servant of the Ministry of Health. He was there, he suddenly sat at a bar table with you and started negotiating 400 million doses, something around R$30 billion. Don’t you think it’s too much of a coincidence?”, asks the congresswoman.

Dias answers that, apart from that day at Brasília Shopping, there was never another meeting where the 4 participants were together. “This gentleman [Dominghetti] I had no relationship and had not presented any proposal to the ministry”, he stated.

In a dialogue with senator Randolfe Rodrigues (Rede-AP), Dias said that he arrived at the mall alone, around 5 pm, and met his friend Ricardo Santana, around 6:30 pm, for a beer. Afterwards, according to Dias, Blanco arrives along with Dominghetti, and they join the 2. The meeting would not have been pre-scheduled.

“But, look, you’ll agree that it’s unusual… You have an appointment, a beer, an end-of-day meeting with a friend. In the course of this end-of-hours meeting (…) A third friend joins this meeting, doesn’t he? Didn’t you find the fourth person who was taken to this meeting unusual, in this case Corporal Dominguetti, just like that?”, asked Randolfe. “At no time did Colonel Blanco say: “Look, I’m taking a friend of mine here, Cabo Dominguetti, he sells vaccine, he sells vaccine”.

Content extracted from audio messages exchanged by Dominghetti indicates that the meeting may have been arranged.

In an audio sent on February 23 -2 days before the meeting at the mall- to an interlocutor named Rafael, Dominghetti informs about the negotiations for the purchase of vaccines and says that “who will sign is Dias”.

“Rafael, how are you? The purchase will happen, ok? We are in the bureaucratic phase. Off the record, so you know, Dias is going to sign, right? It fell into Dias’ lap… and we already talked, right? And on Thursday we have a meeting to finish with the Ministry. I’m in Brasilia now. I go in and out of meetings at the Ministry, and we love trying to get them out of PAHO, to go to Dias directly. But there are these two paths, PAHO and the Direct Ministry. But I update more at night”, says Dominghetti.

On the day of the meeting, February 25, in a message sent to Dominghetti by an interlocutor named Odilon, there is mention of a meeting with Dias: “Hi Domingheti. It seems that the audio did not come out there. I would like to know if you have arranged anything to meet Dias”.

The day after the meeting, February 26, Dominghetti spoke again with Rafael. He says that “everything is all round” and that Dias would get in touch with Cristiano Carvalho, a Davati representative. It also mentions an agreement with Herman Cardenas, the company’s CEO.

“Rafael, I just left the Ministry. All round. Dias is going to call Cristiano and talk to Herman later today. He’s fine-tuning this purchase in several meetings here. Already making the class aware that the vaccine is already available in Brazil, ok? So he’s going to call Cristiano, and Cristiano and Herman agree with him there about how this purchase process, documentation, payment will be. If the payment is AstraZeneca, even better, ok?”.

Odillon would be the man who helped Dominghetti contact the military to access the Ministry of Health. Audio 3 was sent by the military police corporal after meeting Dias on February 26th. The official agenda of the folder registered a meeting of Dias at 3:00 pm.

On Tuesday (June 29, 2021), the newspaper Folha de São Paulo published an interview with Dominghetti, alleged representative of the US company Davati Medical Supply, in which he stated that the Director of Logistics at the Ministry of Health, Roberto Ferreira Dias, asked for an increase of US$ 1 for each dose of vaccine from AstraZeneca. The total doses promised by Davati would reach 400 million. Therefore, there would be US$ 400 million in bribes for the authorization of the business. See more details in this article.

Davati stated that Dominghetti does not represent the company in Brazil. Read the full text of positioning (80 KB). AstraZeneca told the power360 which sells its covid-19 vaccine directly to governments and multilateral agencies. It does not deliver to the private sector nor does it have intermediaries in these operations. In Brazil, its sales are based on “agreements negotiated with Fiocruz (Oswaldo Cruz Foundation) and the Brazilian government”.

On the same day that the Folha de S.Paulo report was published, Roberto Dias was fired from the Ministry of Health. He would have been appointed to the position thanks to a push by Deputy Ricardo Barros (PP-PR), leader of the Government in the Chamber. Barros is also involved in another corruption case – the overpriced purchase of the Covaxin Indian vaccine, the result of accusations by the Miranda brothers.

According to Dominghetti’s report to Leaf, on the night of February 25, at a dinner in Brasília, Dias reportedly heard a proposal to increase the value of each dose by US$ 1.

Two other people were at this meeting. Among them, according to Folha de São Paulo, retired Army colonel Marcelo Blanco da Costa. He worked in a commissioned position in the Ministry from May 7, 2020 to January 19 of this year. Days before the dinner, on February 22, the company Valorem Consultoria em Gestão Empresarial had opened in Brasília.

The following day, in his version, Dominghetti says he met at the Ministry with Dias and the then executive secretary of the ministry, Élcio Franco Filho. Davati’s offer to sell each dose for $3.5 was maintained, which would result in public spending of $1.4 billion. With the bribe, it would reach US$ 1.8 billion. The proposal, according to the company, did not prosper.

ROBERTO DIAS SPEAKS TO THE CPI

In his opening speech at the CPI, this Wednesday (7.Jul.2021), Roberto Dias denied having asked Dominghetti for a bribe, who, in turn, reaffirmed to the CPI the statements made to the Leaf, in testimony on July 1st.

Dias declared that, on February 25, he arranged to have a beer with his friend José Ricardo Santana, who he said was a former employee of the Anvisa (National Health Surveillance Agency) Chamber of Medicines. In his version, when both were already at the Vasto restaurant, in Brasília Shopping, in the central region of the federal capital, Colonel Marcelo Blanco arrived at the same establishment with a man who identified himself as Dominghetti.

The deponent reported that the 4 talked about amenities, until Blanco pointed out that the Minas Gerais PM corporal would have a commercial proposal for vaccines to make to the Ministry of Health. Dias, then, would have replied that the information on the possibility of selling 400 million of doses of AstraZeneca’s vaccine was already circulating in the folder. He would then have asked Dominghetti to formalize a request for an agenda in the DLOG and take documents that prove Davati’s ability to deliver the doses offered.